1950s Formality — Even for Teenagers

“The past is a foreign country; they do things differently there.” – L.P. Hartley
The 21st century is a much more informal place than the 1950s.
It may be hard to imagine a time when T-shirts were only worn as underwear, except by ‘bad boys’ – and no T-shirts had writing on them… when you could get sent home from public school for wearing the tail of your shirt outside your pants… when most men wore hats or caps outside – and removed them when introduced to a lady. 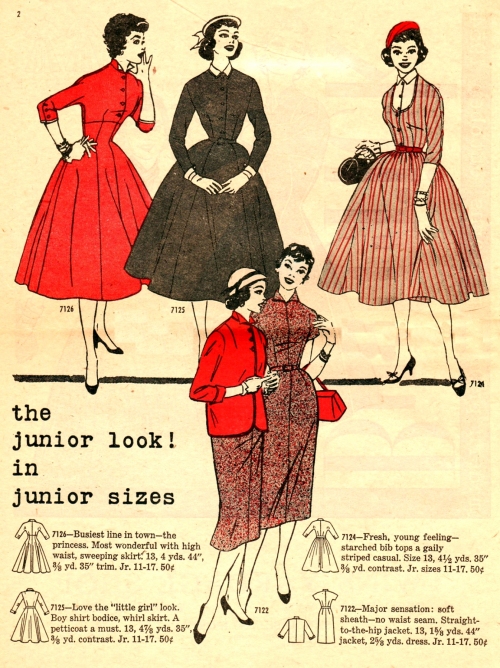 Just a glance at these fashions for teenaged girls, from a Butterick Fashion News flyer dated October 1954, shows us young women who aspired to be adults. They wear gloves and hats when they go out in public (although not to school). Their dresses are tightly fitted, not made for comfort. If we weren’t told that these are dresses for teens, we would think they are women’s styles, especially the Sheath (#7122, Above) and the high-waisted Princess line (#7126, Above.)

The girl above, on the left (#7084) is carrying a delightful purse, probably made of black plastic, like a tiny piece of luggage. The girl on the right has a textbook in her hand, to remind us that this is a school dress. In order to support these very full skirts, we wore layers of crinoline petticoats. Imagine trying to squeeze all that fabric into a school desk or lecture seat! Since crinolines were scratchy, many of us wore a straight slip underneath, like this model.

Believe me, to make your dress look like these illustrations, just one crinoline wouldn’t do – but, actually, just one was more than enough for school days.

Note the gloves. The dress on the right has a strong New Look influence. The illustration reminds me of young Natalie Wood; the last time I saw Rebel without a Cause (released in 1955), I was struck by how grown-up she looked. And yes, ‘rebel’ James Dean did wear a white T-shirt. He was a rebel!

Comments Off on 1950s Formality — Even for Teenagers