My Website for Dating Vintage Butterick Patterns, Part 1
If you have an undated Butterick pattern from the 1920s or 30s, you can probably use my new website, witness2fashion.com, to find the month and year when it first appeared in Butterick’s magazine, The Delineator.

How to Date a Butterick pattern by Using witness2fashion.com

Vintage patterns are a wonderful resource for researching vintage fashions and costume history, but very few pattern companies used to date their patterns. Butterick resisted dating its patterns for decades. My project is to make dating them easier for collectors and historians.

Here Is a Typical Pattern Chart from The Delineator, January 1933 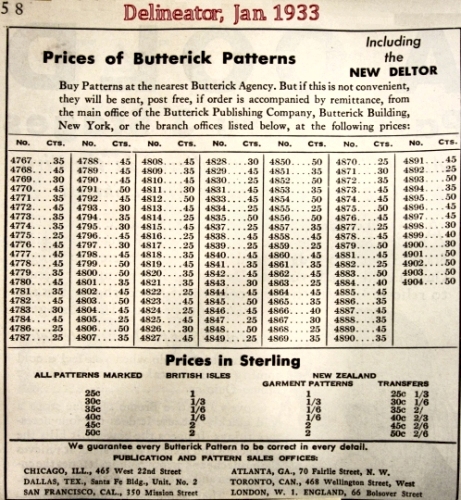 I have been working on this project for over a year, ever since I discovered that, in the 1920s and 1930s, there was a chart near the back of every Delineator, listing all the patterns illustrated in that issue. This was for the convenience of customers who wanted to order by mail.  I have collected that information from over 150 issues, from January 1924 to March 1937, and published it for the use of vintage pattern collectors and sellers, and of course, for historians who need to track the development of styles.

Rather than try to post all the individual charts, I have summarized, giving the highest pattern number for each month, from January 1924 to March 1937. [I will add earlier years as soon as I have the chance.] 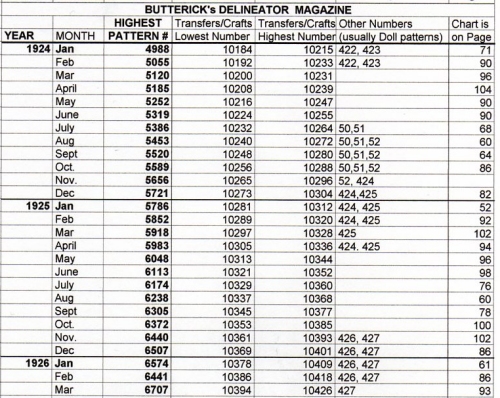 Part of a chart from witness2fashion.com

If you have a 1920s style pattern with a number between #5721 (December, 1924), and #6507 (December, 1925), you can be sure that pattern was first offered for sale in Butterick’s Delineator magazine in 1925. You can even find the month and issue, which is useful for charting changes in hemlines, etc. 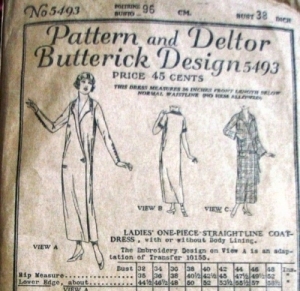 This pattern, #5493, is currently listed on Ebay by Bill Walton’s Antiques.

Finding the date for Butterick pattern #5493

And here is a photo of the original listing in The Delineator, September issue, 1924. 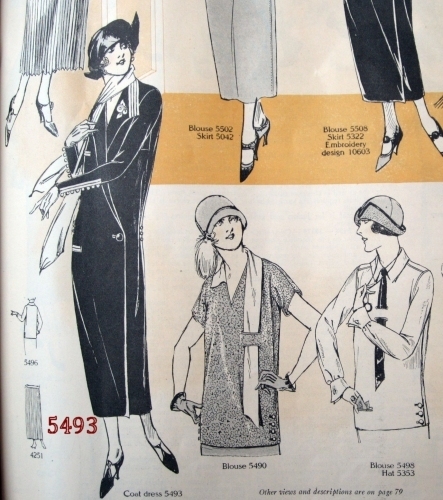 Another pattern, #5508, was listed by  connieandcompany 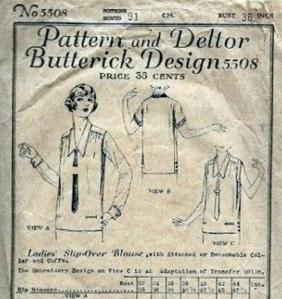 Photo used with permission of connieandcompany

By an amazing coincidence, its number also dates it to September, 1924. This is how it was illlustrated and described: 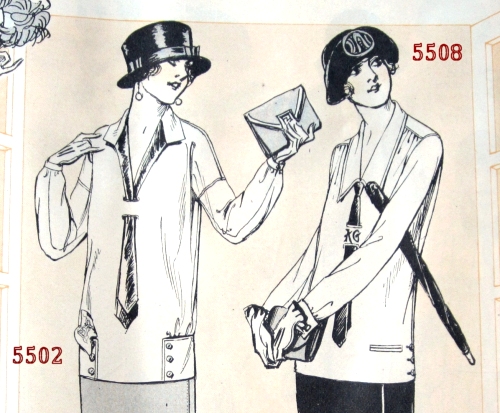 Blouse # 5508: The slip-over blouse is smart to wear with a wrap-around straight skirt with set-in pockets, etc….  Initials trim this blouse of heavy crêpe de chine, etc…. Blouse and skirt are for ladies 32 to 44 bust and 35 to 47 ½ hip.”

Collectors Can Date Vintage Butterick Patterns to the Year and Month

Mr. Walton has said, quite accurately, that his pattern #5493 has a patent date of 1921.  In her excellent article about Mc Call’s patterns, De-coding Vintage Patterns, the Wearing History  blogger explained that a patent date may refer to the pattern’s mechanical process or printing process, not the design itself. It is not the same as the copyright date on a modern pattern.

The witness2fashion.com charts show the month and year when the Butterick Publishing Company first illustrated and described each sewing pattern it was offering for sale. They may have been available in stores a little earlier, but being featured in the magazine means the fashion was current.

More About the Two Patterns from September, 1924

Statistically, the chance of my finding two vintage patterns currently for sale on Ebay which date to the same issue of The Delineator was pretty small, but, incredibly, they also appeared on the same page.  Even more amazing: by pure serendipity, I happen to have photographed the very page they appeared on just last week! 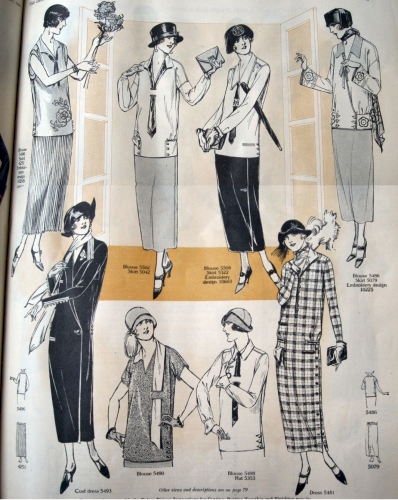 That is why I was able to supply pictures of them from the magazine. (And thank you to Ebay sellers waltonsjunk  and connieandcompany  for allowing me to use their listings and photographs!)

There are so many great blouses on that page that I can’t resist describing them, too, in a later post.