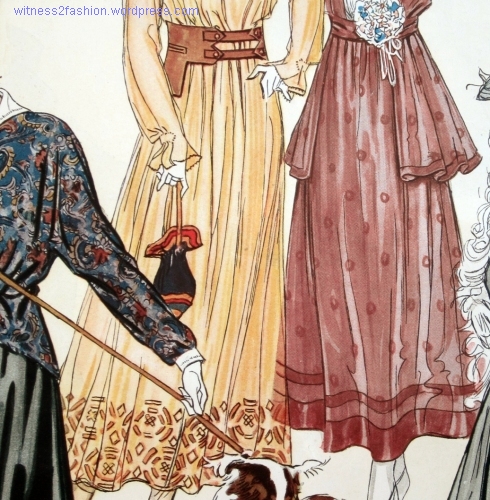 At my grandmother’s house was an inexpensive child’s version of The Arabian Nights, with black and white illustrations that fascinated me. 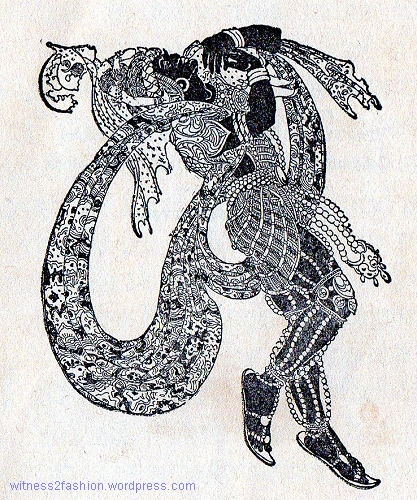 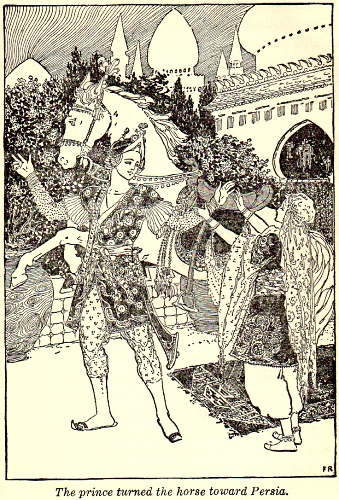 The Enchanted Horse, illustration from Arabian Nights, John C. Winston Co., 1924. The artist’s initial in the corner is FR.

Illustration for The Arabian Nights, probably by Rene Bull. A feast of pattern and textures in black and white.

I recently located an edition similar to the one I loved and lost. When I began to research the illustrator, things got complicated. My 1924 book, published in America by the John C. Winston Co., says “with colored plates by Adeline H. Bolton.” But the black and white illustrations, much more exciting (to me) are not credited, and they appear to be by more than one artist, “FR” and Rene Bull among them. And some, at least, date back to 1912. 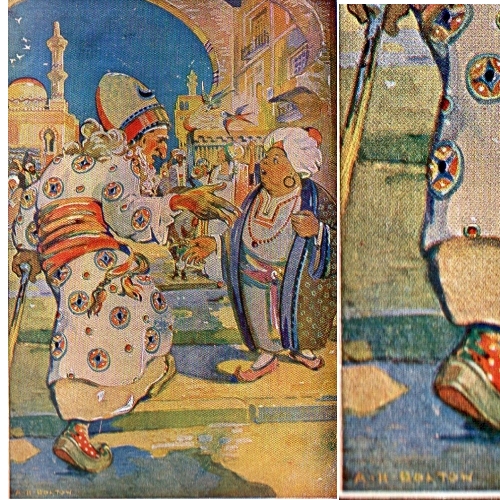 . . . may have been hired to paint like Rene Bull. I can’t identify “FR”, but at least some of the black and white illustrations are signed by Rene Bull — who had done illustrations for a 1912 British edition of The Arabian Nights, also published that year in the U.S. by Dodd, Mead, & Company. Bull illustrated The Rubaiyat of Omar Khayam in 1913, and Russian Ballet, by A.E. Johnson, also in 1913.

I’m not the first to notice that the costumes of the Ballets Russes — an explosion of color, embroidery, jewels, and complex pattern — influenced fashion in the first part of the twentieth century! Oddly, the contemporary book Russian Ballet (1913) is not illustrated with costume sketches by Bakst, who designed many of them, but by that well-known illustrator of Middle Eastern tales, Rene Bull.

Looking through Delineator fashion illustrations from 1917, I keep seeing echoes of my old Arabian Nights, which may have been pirated in part from the 1912 Rene Bull edition. The stripes, the embroidery, the gauzy fabrics and large-scale prints, even the poses, show how deeply this kind of art permeated the era. “Zeitgeist” might be too strong a word, but “something in the air” might apply to fashion illustration, Rene Bull, “FR”, and textile designs inspired by them. 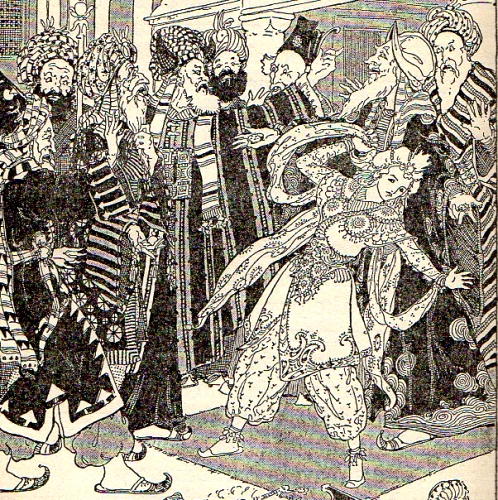 Illustration by FR for Arabian Nights:  The Princess feigns madness. A riot of checks, stripes, dots, arabesques of sheer fabric, and embroidery.

Airy-fairy-peri poses, and a long gown with large-scale pattern of medallions of “blue and green Chinois flowers,” by Doucet. 1917. The bodice has “diamonds and sapphires embroidered over silver lace.” Delineator.

(A peri is a magical being from The Arabian Nights. There’s an illustration of one later in the post.)

The Ballets Russes repertory included Greek costumes  (like the third, above) for “Narcissus” and “Afternoon of a Faun.” This advertisement, from much later, shows that complex black and white patterns still appealed to readers in the 1920’s.

This illustration is an ad for Needle Art which appeared in 1924. Delineator. I love the play of black and white patterns, still appealing to readers long after 1917.

Large scale prints, May, 1917. Delineator. The design on the left is oriental lanterns. The prints on the right are large and widely spaced.

Fabrics with big dots, widely spaced. 1917. The skirt on the right makes me think of “harem pants.”

Bolton illustration for Arabian Nights, with some 1917 fabrics with similar properties. Was Bolton influenced by familiar dress fabrics? Or just imitating the successful illustration style of 1912 – 1913? 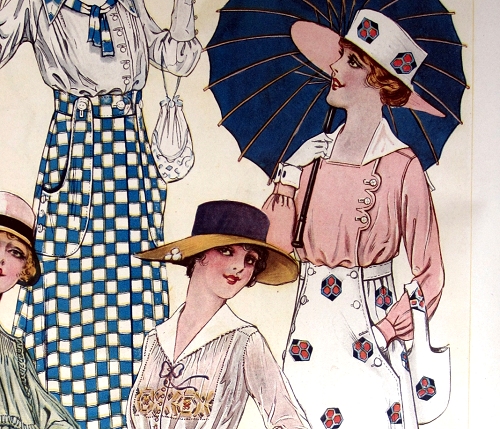 Checkerboard print and big dots with a hexagon design. 1917, Delineator

Stripes, squares and dots in wild profusion; illustration by FR for Arabian nights. 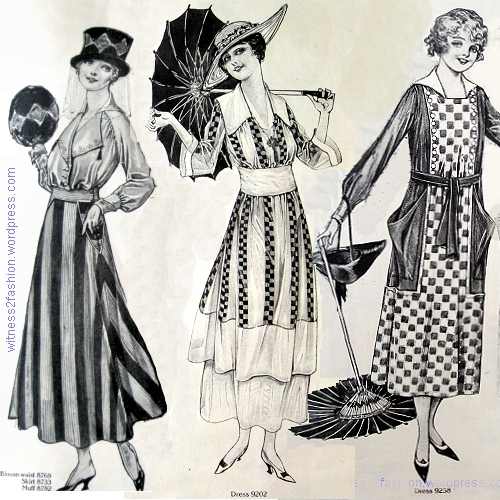 Did I mention the mania for embroidery?

A Peri (Persian Fairy) and a Prince, by Rene Bull. Arabian Nights. 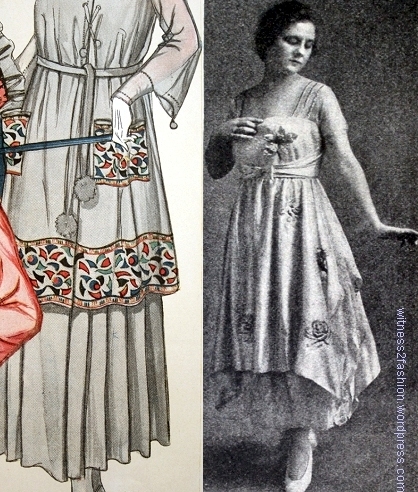 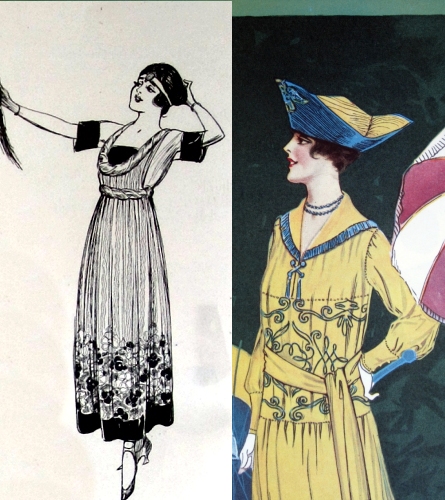 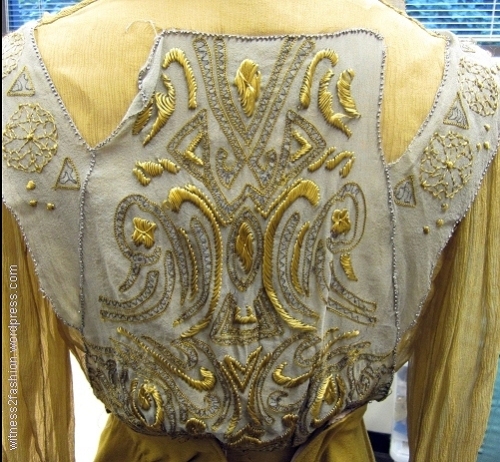 Beading and Embroidery on sheer fabric appliqued to back of 1917 dress. 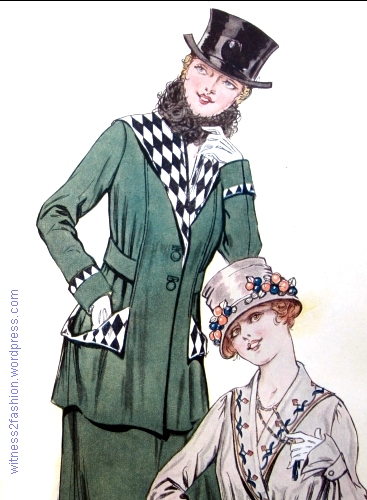