Tangee Lipstick & Maybelline Mascara: A Pre-teen’s Makeup in the Fifties 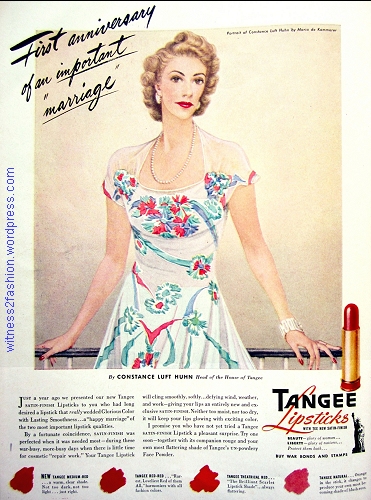 Tangee for the lips: This advertisement for Tangee color-changing lipstick is from Vogue’s college issue – August 15, 1943. You can see the patriotic “Buy Bonds” text at right. 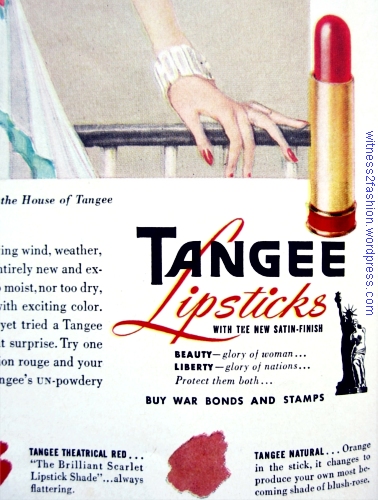 “Orange in the stick, it changes to produce your own most becoming shade of blush-rose.” Body heat transformed the translucent orange Tangee Natural lipstick to a light salmon pink when I tested it on the back of my hand.

Tangee was the “entry level drug” of cosmetics for me and my friends, growing up in the 1950’s. In the late fifties, lipstick colors were often a frankly artificial red, but Tangee’s promise to adjust to your own lip color and give your lips a natural – but enhanced – hue, meant that I could justify “Tangee Natural” to my father. Rubbed on my hand, it was light pink and almost transparent; I could say, “See, it’s hardly any color at all!” (On your lips, it became darker.)

My friends’ parents also gave their grudging approval for us – aged 13 or so – to wear “natural” Tangee. You could even get away with wearing it to a Catholic girl’s school – usually — if you blotted it…. I don’t know why I wanted to wear lipstick, except that my friends wanted to do it. I wasn’t interested in boys — but applying lipstick was one of those things that adult women did. (Like smoking cigarettes….) 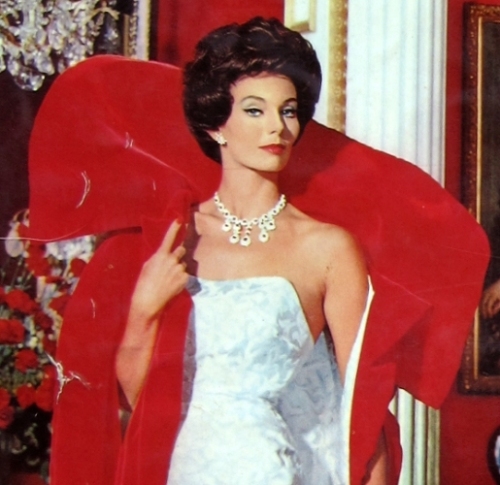 This series of Revlon ads targeted grown women, not teens.

Dime Store Makeup in the Fifties

We didn’t have a Woolworth’s Five and Dime store, so we bought our Tangee at the local Ben Franklin Variety Store. It wasn’t an expensive brand; perhaps Tangee still came in both small and large sizes.  In 1958, young teenagers (Junior High age) didn’t usually wear any other makeup. We did eventually move on to mascara in high school; Maybelline, then as now, was available in drugstores and affordable even on a very small allowance. 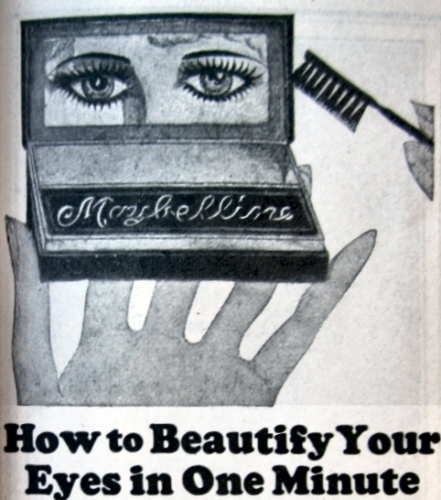 However, I have no memory of Maybelline in a liquid form.

The Maybelline I knew came in a very small, red plastic case, with a sliding lid,  and inside was a tray of hard black or brown mascara and a small brush with one row of black bristles. I regret to say that everyone I knew, including my mother, used spit, not tap water, to activate the mascara. (Don’t! Very bad idea!)

Maybelline Mascara: A Family Tradition
The Maybelline product and packaging were familiar to me from my early childhood, because my mother had used it for her entire adult life. This ad is from a 1943 magazine. . . 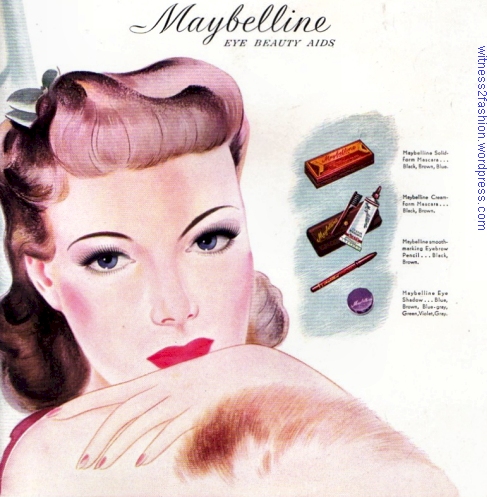 Maybelline Mascara was an old friend to my mother, a would-be “glamor girl” in the 1920’s. 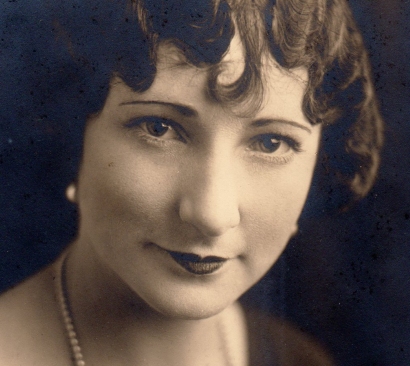 My mother. Office worker in makeup, circa 1929. In addition to applying mascara to her lashes, she has powdered over her natural lip line and created a dark red “cupid’s bow” or “beestung” lips. She’s obviously not a fan of subtle Tangee lipstick!

Maybelline also made eyebrow pencils, of course, but young teenagers I knew in the 1950’s did not use them to line their eyelids, at least not until we were in high school, and usually not while attending classes before 1960 or so. We tried to be subtle. The nuns had sharp eyes. So did our parents. 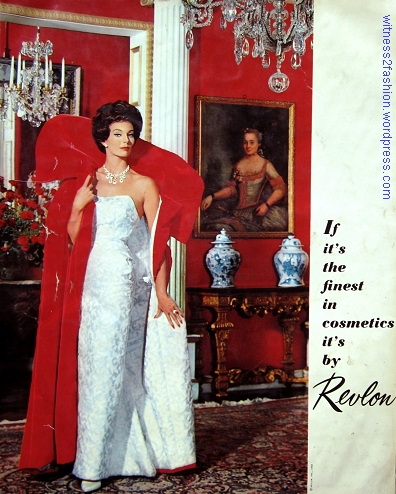 I don’t think I knew there were any other manufacturers of eye makeup products until the 1960’s! The magazine ads for Revlon’s Fire & Ice lipstick (above) were memorable, but aimed at grown women. When I spoke of mascara, I said “Maybelline.”
As a working class kid in the late 1950’s, shopping for cosmetics at a department store never occurred to me. For one thing, the only department store in town was Montgomery Ward, (which we, and the adults we knew, always referred to as “Monkey Ward’s.”) I associated Ward’s with January White Sales and my uncle’s overalls, but not with cosmetics. And for another, we had very little pocket money, so we did our furtive Tangee shopping at the “Ben Frank’s.”

White Lipstick and Black Eyeliner: The Sixties.
Once our parents got used to the sight of us in our Tangee lipstick, it was time to move on to a relatively light colored Revlon lipstick called “Persian Melon.” (It was more coral than red.) Then came the mid-1960’s – the Beatles, Mary Quant in Vidal Sassoon Haircuts, the Mod Look, supermodels Jean Shrimpton and Twiggy, the glorification of all things British – and Yardley (of London!) cosmetics, which targeted the new youth market with white lipstick, tons of eye makeup, and eyeshadows in a rainbow of colors.  But I still bought Maybelline mascara in a little red box.

Mom and Dad Get the Last Laugh

We 12-year-olds thought that Tangee was a secret passed down to teen girls from their older sisters. I didn’t know until recently that our parents knew all about Tangee cosmetics:  Tangee had been around since the early 1920’s, and advertised heavily in women’s magazines in the 1930’s. According to an excellent history from the Collecting Vintage Compacts website, Tangee was the best selling lipstick in America in 1940! (That site has many vintage Tangee ads in color, too.)

Here are some black and white Tangee ads from the 1930’s, when my parents got married. Sometimes the ads were pitched to women who were still worried that wearing obvious makeup would make them look “fast.” There must have been plenty of women in small-town America whose menfolk disapproved of cosmetics (at least, on their own wives and daughters….) 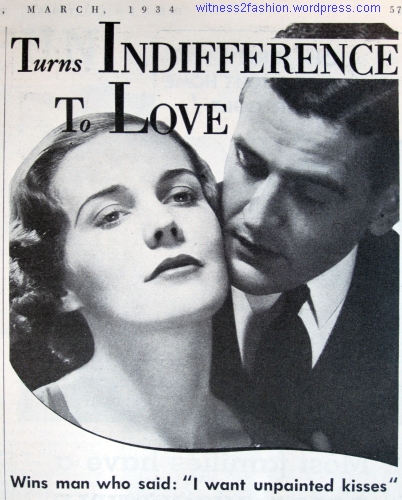 Tangee ad, Delineator, March 1934. “It was her own brother who guessed what was wrong … and told her the truth: … Men don’t like paint.”

For some small-town women, there was the problem of competing with younger women for the available bachelors: 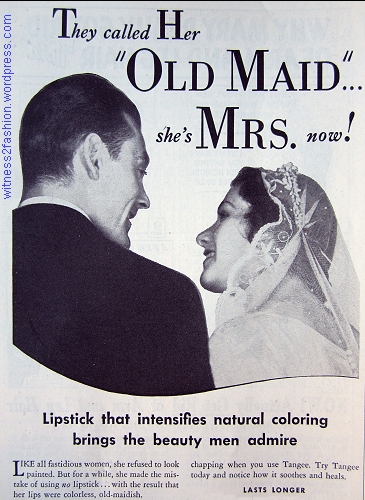 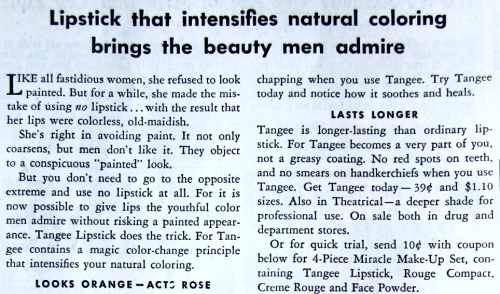 Text of Tangee ad, May 1934. “Like all fastidious women, she refused to look painted. But for a while, she made the mistake of using no lipstick… with the result that her lips were colorless, old-maidish.”

Even conservative older women wanted to look more youthful — although the wife of a small-town mayor or local businessman couldn’t risk scandal by looking like a “painted woman.”

Tangee lipstick ads from 1934, left, and 1937, right. “Simply emphasize the natural color in your lips!” Notice that the lipstick appears colorless in this ad, although the model’s lips look fashionably dark.

Eventually Tangee branched out into more vividly colored products. Tangee Natural lipstick is still available – with delightful testimonials – from Vermont Country Store.  If you wonder how lipstick was made, Glamourdaze reprinted a story,”Inside the Tangee Lipstick Factory,” from 1947, when 190 million individual tubes of lipstick  — from all brands — were sold!

6 responses to “Tangee Lipstick & Maybelline Mascara: A Pre-teen’s Makeup in the Fifties”