Images from an article in Butterick’s Delineator magazine, July 1918.

In high school, history was my least favorite subject. Now that I am older, I wish we had been encouraged to study history in a different way; I have always been interested in people and their daily lives. The faces of these women  intrigued me. [Caution: I may be guilty of doing superficial research — TLDR–while trying to find out more about these “Huns,” “spies, and “traitors.”]

My point is that more research might be rewarding, that starting with a face and a name might be a way into the past for people who think history is boring,  and that “women’s magazines” or “fashion magazines” should not be disdained by historians.

Historians may find more than they expect in “women’s magazines.” Especially in wartime,  Ladies’ Home Companion, Delineator, McCalls’ Magazine and several other “fashion” periodicals presented a ready platform for communicating with women across the country. During World War I,  Ladies’ Home Journal and McCall’s Magazine had over a million subscribers each. [Magazines in the Twentieth Century.]

“Huns, Here, There, and Everywhere,” a page from Butterick’s Delineator magazine, July 1918. Detail: top of page. “These are in jail, but other spies and traitors are at work for the Kaiser … WATCH FOR THEM.” Calling the enemy by a pejorative nickname (e.g., “Huns”) is a propaganda device, which made me want to learn more about these people.

When I leaf through a women’s magazine from 1925, or 1917, such as Ladies’ Home Journal, or Butterick’s Delineator, I find more than fashion — I get a little social insight into the era. The editors wanted to sell magazines, so the articles that surrounded the patterns for sale had to be of interest to readers, too. Often they are short stories, or serialized novels. But the magazines are not always about creating a fantasy world. “Real world” topics impinge.

How much money does a young married couple need, and how should they budget it? (1920’s)  What are the jobs open to a college girl? How much will they pay? Can she live on $18 a week? (1930’s) Why does one out of seven babies born in America die? (1917 Delineator series) Should doctors administer anesthetics to a woman in childbirth? (Delineator, September 1934.)

In wartime, women’s magazines cooperated with the federal government in spreading information.

How can you feed your family and understand wartime food restrictions? 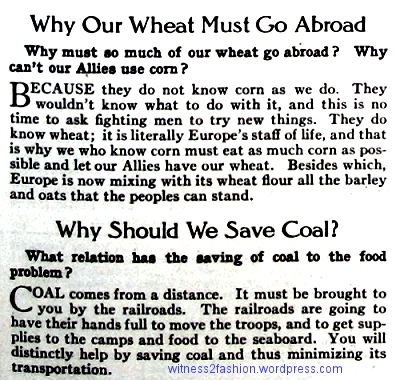 What garments can you sew for the Red Cross?

Official Red Cross garments to be made by volunteers. A surgical gown, and two kinds of pajamas — one of which can be easily opened while treating wounded men. Delineator, November 1917, p. 77.

In December, the same information appeared in Ladies’ Home Journal, illustrated with photos instead of line drawings.

What can you expect when your son goes off to war?

In this case, the topic was watching out for German Spies. (July 1918)

Top of “Spies and Lies” article, Delineator, July 1918, page 38.  The women are oblivious of the eavesdropper.

More of “Spies and Lies, Delineator, July 1918, p. 38. In World War II, the equivalent message was “loose lips sink ships.” But readers should also “Report the man who spreads pessimistic stories [or] … cries for peace.” I regret that I didn’t photograph the last few lines of the “Spies and Lies” article from this fashion magazine.

This set of “mug shots” has been on my mind recently, especially since the San Francisco Chronicle published two 100th anniversary articles about the prosecutions following the “Preparedness Day Parade” bombing that occurred in San Francisco on July 23, 1916.  One 2016 article, by Carl Nolte, had the title “Bombing Centennial: Blast in July 1916 killed 10, left 2 innocent men in jail for decades.”

“Juries convicted two labor union organizers, Tom Mooney, 33, and Warren Billings, 22, … although, as it turned out, the convictions were based on perjured testimony and doctored evidence. The real bombers were never caught.

“Investigations later showed that Mooney and Billings had been framed by San Francisco District Attorney Charles Fickert, who was acting on behalf of the city’s business establishment, anxious to strike a blow at labor unions and what they saw as dangerous leftists and anarchists. “

Thanks to a crusading newspaper man  — editor Fremont Older — Mooney and Billings were finally freed — in 1939.

” ‘ It is impossible to know what really happened that day in 1916,” said Chris Carlsson, a local historian. ‘But for sure, it was not Mooney and Billings who planted that bomb.” — Carl Nolte, SF Chronicle, July 17, 2016.

If you want to read Nolte’s entire article, (the online version has a different title,)  click here. (And who doesn’t want to read about a newspaper man who lost his job — and got another– because of his investigation, but never stopped trying to free two innocent men?)

After reading about this incident,  I remembered Delineator’s gallery of convicted German spies, and I wondered about them –especially these two women. (It’s important to remember that activities which are lawful in times of peace — like organizing a strike, or opposing the draft — may be illegal in times of war. It can happen very quickly.)

Who Were These People?

They were all convicted. They were not all “Huns” or German agents.

In 1916,  Kate Richards O’Hare was the Socialist Party candidate for U.S. Senate from Missouri. She opposed America’s entry into the war.  O’Hare was arrested in July, 1917 because she gave a speech “deemed to be anti-war.”  (By this time, the U.S. was officially at war with Germany.) When sentenced to five years in prison, she said, “[if] it is necessary for me to become a convict among criminals in order that I may serve my country there, then I am perfectly willing to perform my service there.” She was guilty of “espionage”  because she violated the Espionage Act of 1917. She later devoted many years to prison reform; according to Britannica.com, “in 1924–26 she conducted a national survey of the contract-labour practice of prisons.” [A topic still of interest today.] A great deal has been written by and about her.

But Cornell is another story. Mrs. Margaret Cornell of San Francisco might be a rewarding subject for more research.  Was she a low-level office worker trying to keep her job at the German Consulate, or a willing participant in her boss’ plot to disrupt British shipping?  She was the only woman was among many workers at the German Consulate in San Francisco convicted in the Indo-German-Irish plot: “Just a few months into World War I, an Indo-German-Irish plot was established to ship American weapons to India for a revolt against the Raj with the intention of reducing Britain’s ability to wage war on Germany and Irish nationalism. ” See British Intelligence Station in San Francisco during the First World War.  (Yes, in the neutral U.S.A., spies of many nations were at work.)

Cornell received a relatively light prison sentence, and no fine. I found the record of her admission to San Quentin Prison, on Feb. 8, 1917, through Ancestry.com. Although newspapers sometimes refer to her as Margaret W. Cornell, there she is listed as Margaret E. Cornell; Cornell is presumably her husband’s name. Her occupation is “office clerk,” her age is 52, and her birthplace is Ireland. She was convicted of espionage (Sections 37 and 13 of the U.S. criminal code) because she passed coded messages between her boss (the German Consul-General) and Charles Crowley, another member of the “Hindu Conspiracy,” as the press called it. Was she a dupe? Was she suspected of having anti-British, Irish Republican sympathies? (The Easter Rising of 1916 was a rebellion against British rule in Ireland.) At one point in the trial, she said, “I am now a woman without a country.” She is mentioned — and quoted — in newspaper accounts of the trial;  in 1917, San Francisco had several competing major newspapers, so there is plenty of material for a student of history to explore. Cornell claimed to have TB, and feared that she would die in jail. What happened to her?

Here are brief descriptions of some of the other “huns” and traitors who were pictured.

Louise Olivereau worked as a stenographer for the Industrial Workers of the World (a labor organization popularly known as the Wobblies) — but she was also an anarchist, and she distributed anti-war circulars which she had printed at her own expense, for which she was convicted under the Espionage Act of June 1917.

If Wilhelm von Brinken (who looks as if he usually wore a monocle) seems familiar, it is because he became an American citizen in 1920 and had a long career playing Germans in 92 Hollywood war films (WW I and WW II.)

Von Brinken was indicted along with his boss,  Franz Bopp, the German Consul-General in San Francisco, Baron E.H. von Schack (the Vice-Consul)  and Charles C. Crowley.    Like Margaret Cornell, Crowley worked for the German Consulate.  [San Francisco Chronicle, Feb. 9, 1917.] A well-known detective hired by the German Consul-General, Crowley was accused of trying to plant bombs in Canadian munition ships and elsewhere; Crowley and Bopp communicated — in “coded messages” — that were sent to Cornell. (Did she understand what they were about?)

Left, Franz Bopp, German Consul-General in San Francisco, who was convicted of violating U.S. neutrality as part of  the “Hindu Conspiracy,” among other charges.  Right, Captain Franz von Rintelen was chief of the German Secret Service in the U.S. during WW I. Delineator, 1917.

“Anti-draft rioter” Homer C. Spence of Oklahoma — who looks like he stepped out of the pages of Time-Life’s “The Pioneers” —  was implicated in the “Green Corn Rebellion,” which was subject of a 1937 novel of that name by William Cunningham. The  inter-racial (white, black, and Native American) “Working Class Union” (WCU) of mostly young tenant farmers was involved. (The idea that rural Oklahoma was once a hotbed of Socialism was certainly news to me!)

I knew nothing about this part of American History, and I have not read every word of all the links I cited — some are book-length. (They are there for anyone to pursue.)

But it just goes to show what surprises you find while reading old “women’s magazines.” If you know any history students in search of material, you might want to steer them toward browsing old “fashion” periodicals. What a lot of questions they raise!

Since many of these “Huns” were arrested and tried in San Francisco, I used some news items from the San Francisco Chronicle archives for 1917 and 1918, accessed through my public library.

(For other ways World War I was reflected in women’s magazines, see “Up Like Little Soldiers,”  WW I Fabric Shortages , and “New Clothes from Old.”)