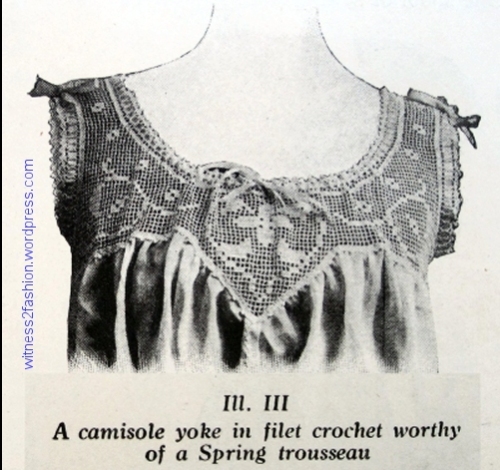 Filet lace on a camisole, Delineator, April 1917. The same yoke could be used on a nightgown. 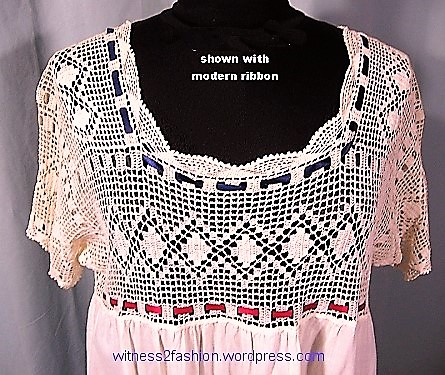 A vintage nightgown with a filet lace yoke. Modern blue and red ribbon was inserted, but the original ribbon insertion was probably white or pastel colored. The nightie is white, not pink. (I’m learning to use a new computer….)

There seems to have been a fashion for lingerie trimmed with this crocheted lace during the First World War era.  “Filet lace” is often recognizable by characteristic grid patterns, although quite complex shapes, such as butterflies and flowers, can be created. I know nothing about crochet and very little about lace, but I’ll post these images for those who do have an interest, especially since it may help to date vintage items. 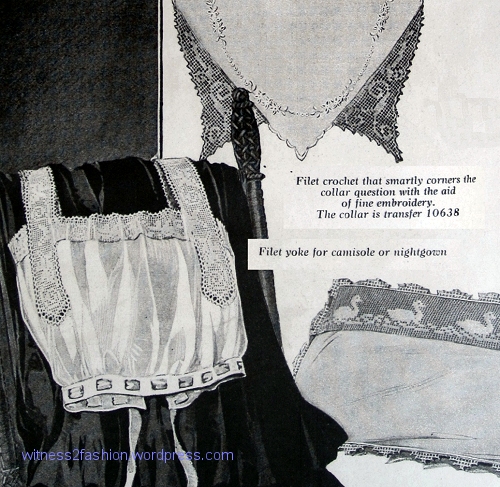 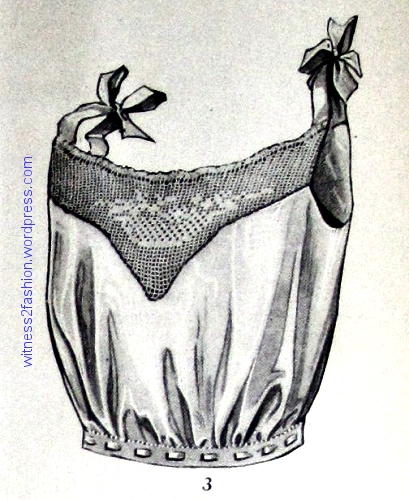 A camisole trimmed with a basket of flowers. Filet lace, Delineator, December 1917. 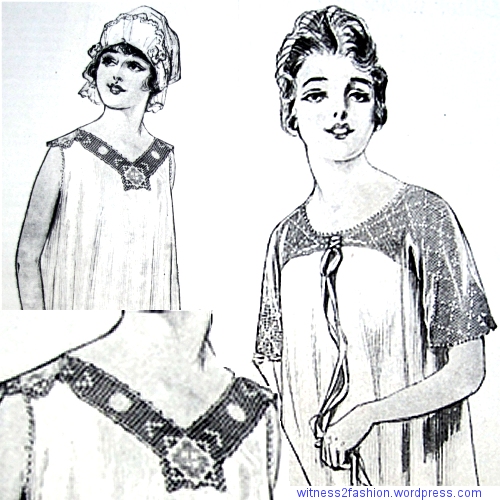 Nightgowns might have a simple crochet lace yoke or a crocheted yoke that includes sleeves. Butterick patterns 8140 and 8552 from Delineator, August 1917.

Below, a different version of Butterick nightgown pattern 8552: 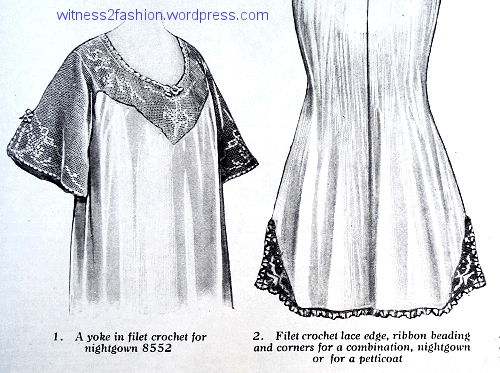 Filet lace trims a nightgown and a combination, Delineator, February 1917. 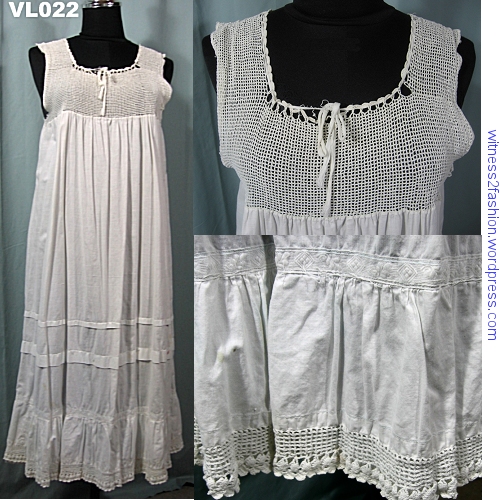 This vintage nightgown has a simple (see-through) yoke, but the gown is trimmed with patterned crochet lace.

Collars and blouses were also a popular place to display crochet lace: 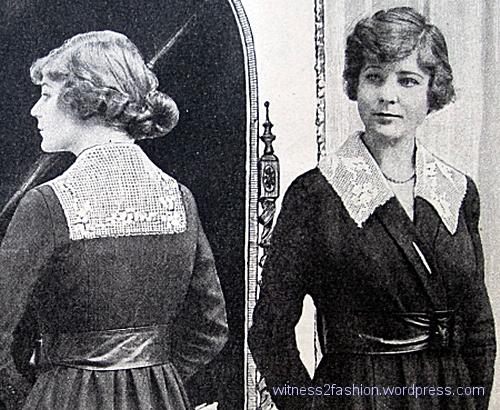 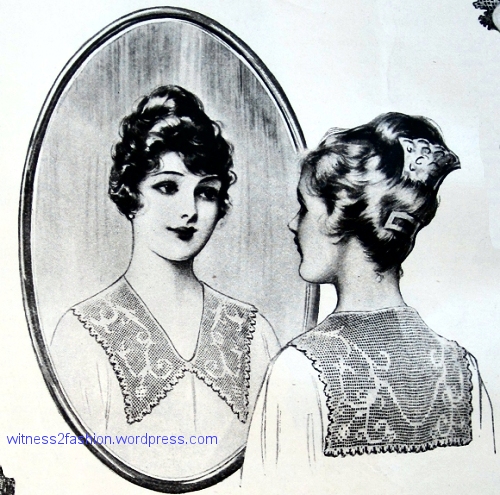 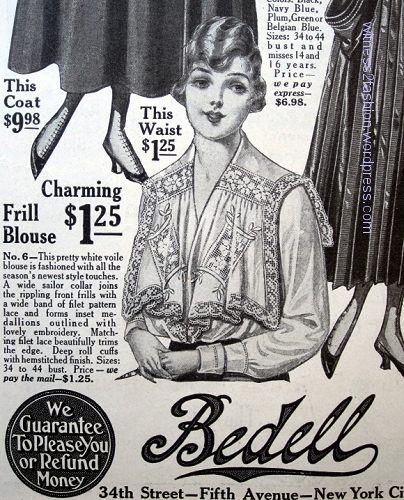 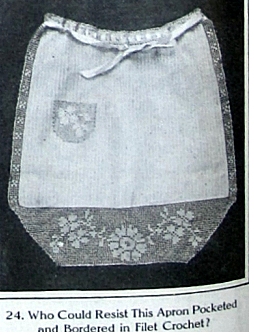 An apron trimmed with filet lace, Ladies’ Home Journal, August 1917. This fancy item was suggested as something that could be sold at a charity bazaar.

“Even the baby wears filet.” 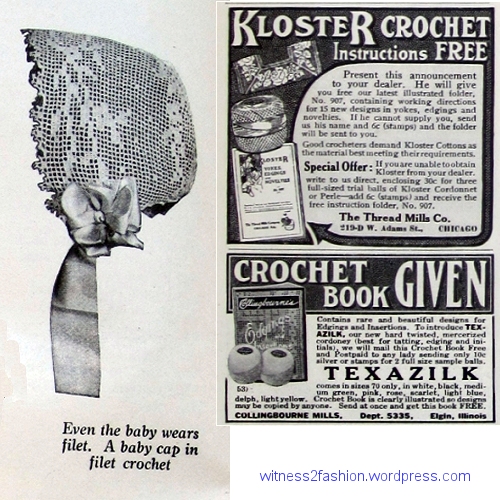 A baby cap in filet crochet from a page of needlework projects. Ads for needlework supplies often ran alongside these articles. Delineator, March 1917.

Lace-trimmed jabots were also popular circa 1917. 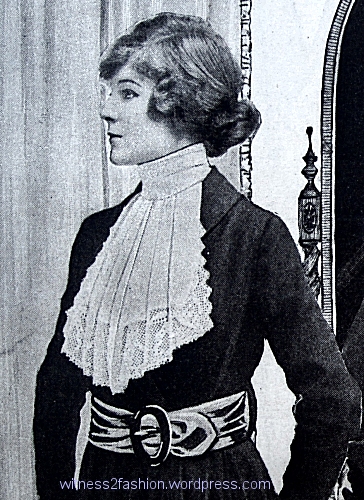 A filet-trimmed jabot that could be worn with different outfits may have been popular with women who were not quite used to wearing the new V-neck fashions. Delineator, Sept. 1917

Geometric, grid-based filet lace was not limited to the nineteen-teens; this spectacular display decorates the front and back of a slip that shows 1920’s styling. 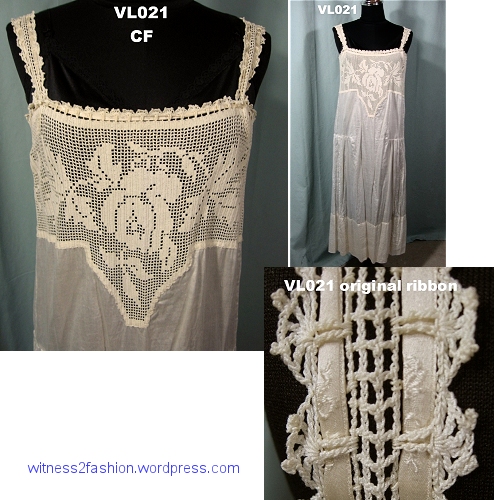 This slip, circa 1920-1925, has a large amount of filet lace both front and back. It has 1920’s style hip accents, and its length indicates early twenties. The original silk ribbon inserted in the shoulder straps and top of the yoke has a floral pattern woven into it.

It’s possible that the large piece of lace is machine made, but the straps are crocheted.

Filet lace was often pictured along with other forms of lingerie lace trim. 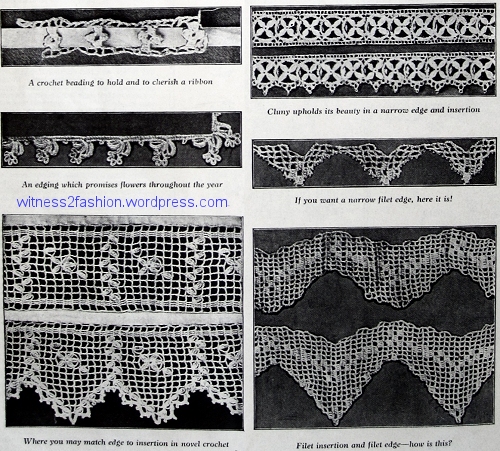 Lingerie lace featured in Delineator, August 1917. Readers could write for the instructions. 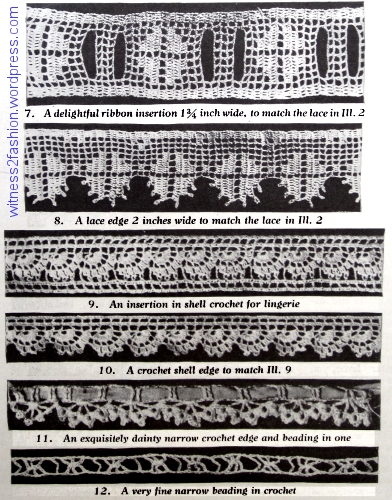 P.S. Happy holidays to all!