Sleeveless (and Almost Sleeveless) in 1924 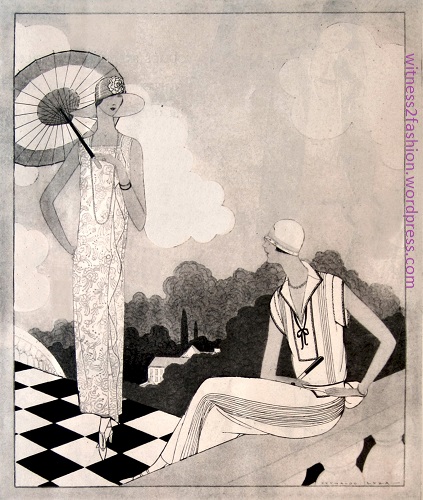 “The sleeveless styles are to be much worn for country dresses and frocks for restaurant use…. For out of town these dresses are made of the fine cotton materials in white and delicate colors.” 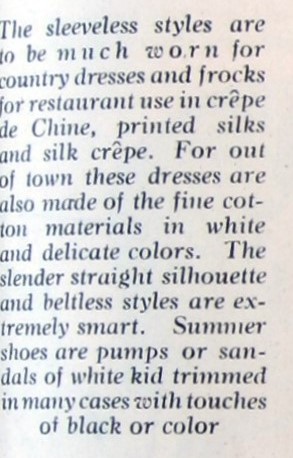 Caption for “New in New York” article by Evelyn Dodge, Delineator, May 1924.

What makes this worth notice is that most contemporary fashion advice until 1924 emphasized that evening dresses were sleeveless; day dresses for city wear were not.

This dress is definitely “sleeveless,” and the parasol tells us that it is not being worn as an evening dress, but an afternoon dress. May 1924.

Although the dress in this illustration does not look short to me, editorial advice in April declared: “Dresses remain decidedly short except for evening. For day dresses sleeves can be long or short [;] evening dresses are sleeveless.” Nevertheless, the rules were obviously changing in 1924, as this drawing of a casino shows:

From an advertisement for Butterick in Delineator, January, 1924. “On the Riviera, in Paris, wherever fashionable society meets….” Dresses with long and short sleeves, as well as sleeveless dresses, are worn at this gaming table, blurring the distinction between day and evening clothes.

Often, nineteen-twenties’ lace, silk, or chiffon afternoon dresses used the same pattern as an evening dress — but the evening version was sleeveless and usually had much lower-cut armholes: 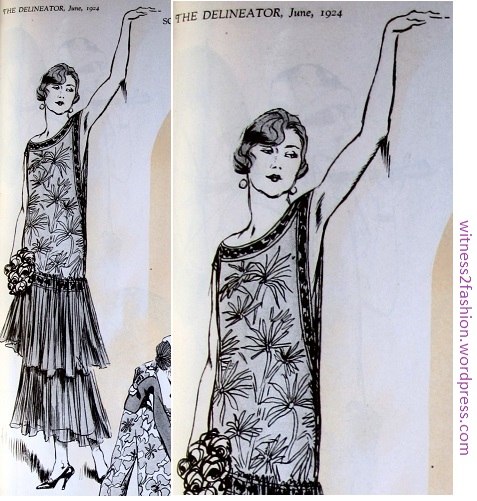 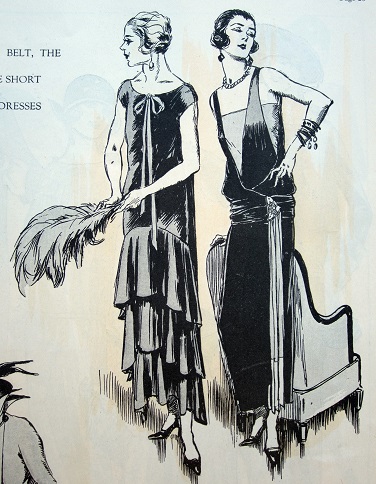 Description of evening gown by Lenief, March, 1924. Delineator. “For more formal evening use the decolletage is deeper and the bodice is entirely sleeveless.”

Butterick evening gowns from April 1924: No. 5126, in yellow, has armholes that reach the waist. It is a robe de style in the mode of Jeanne Lanvin. No.  5110, in pink, is more conservatively sleeveless.

Sometimes the underarm opening was very revealing; it could be charming when a lace or chiffon under-dress was revealed, as in this advertisement:

Very low-cut armholes reveal the under-garment in this 1924 ad for Vivaudou talcum powder.

Not all evening gowns had extremely deep arm openings:

Not all evening armholes were cut extremely low. Sleeveless Butterick 5064 from April 1924.

However, the “sleeveless” look that caught my attention as distinctly a fashion of 1924 is this one:

A closer look at the “New in New York;” the dress on the right of the illustration of “sleeveless” dresses has an unusual armhole, cut very deep and finished with a band of fabric. Delineator, May 1924.

Right, a different illustration of the dress in the editorial illustration: Butterick 5199, shown here in yellow, is a deep-armholed dress is made of sheer chiffon.  May 1924. Notice how far below the top of the slip is the bottom of the armhole.

Butterick 5259 appeared in April, 1924. Anyone looking at her side with the arm raised would have seen inside the dress. It could also be made with long sleeves. 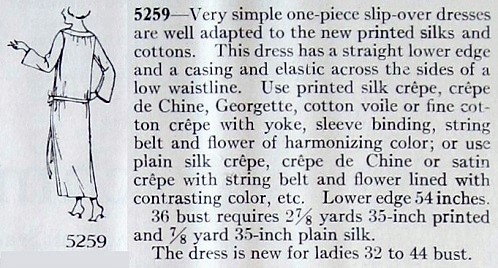 For vintage dealers and historians, here’s an interesting fact: Butterick 5259 used elastic in a casing at the sides of the low waist.

In June, a similar style was illustrated as a dress for Misses:

Butterick 5253 was similar to 5259, but the dress is not printed with stripes; those are graduated tucks which get bigger near the hem.

This blurry photo of a dress by Paul Poiret shows a similar deep armhole with a wide, straight binding: 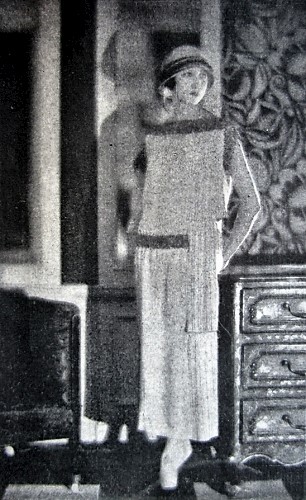 Photo of a dress by Paul Poiret, from Delineator, July 1924. 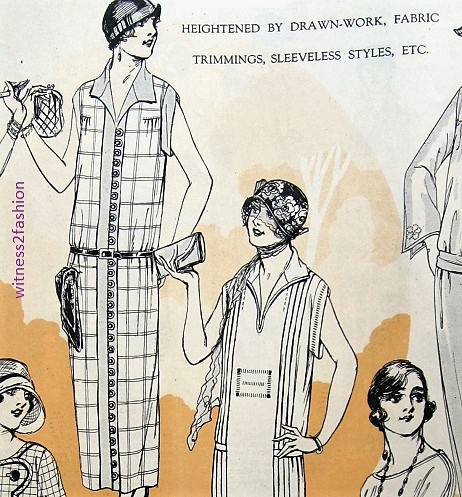 These are not “sleeveless” by today’s standards; other, more typical 1920’s styles might have a sort of cap sleeve, often cut in one with the shoulder of the dress: 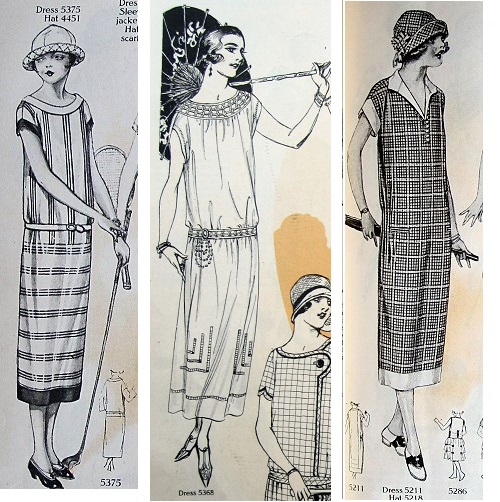 Typical twenties’ dresses with short sleeves, sometimes cut-in-one with the body of the dress. These are not described as sleeveless. All from 1924, Delineator. Butterick 5375, 5368, and 5221

However, I haven’t yet found a specific word for the low, bound arm openings like this one, simply described as “bindings” or “sleeve bands” : 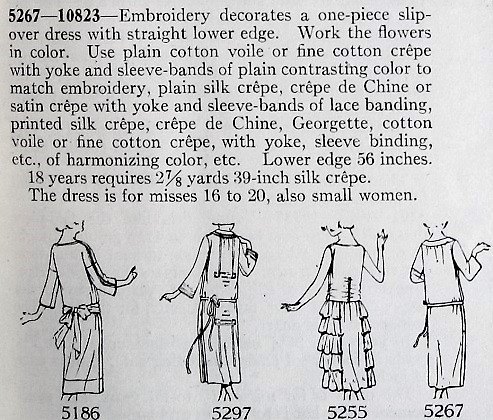 These wide, band-bound armholes were also seen a blouse: 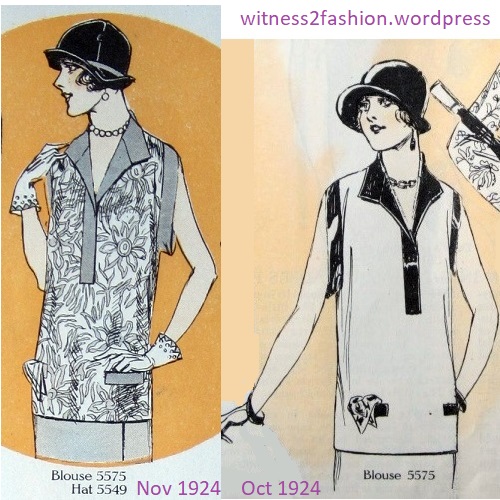 Ads for Zip hair remover, both from Delineator, 1924.  “Those embarrassing moments… those critical looks….” Superfluous hair is “off because it’s out.”

Removal of underarm hair was not a new idea — evening gowns of the 1910’s were also revealing.

This Neet depilatory ad from 1924 suggests that “Perhaps because of an old-fashioned scruple you have hesitated to rid yourself of the disfigurement of underarm hair….Are your arms constantly pinned to your sides? …The swing of convention … is carrying America back to the old Greek ideal of womanly beauty — the unhampered, active, supple body.” It was also a body with underarms as hairless as a marble statue. 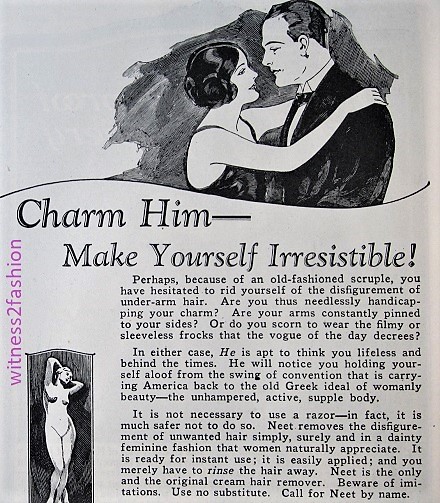 Ad for Neet hair remover/depilatory. Delineator, Oct. 1924, p. 25. “…Rid yourself from the disfigurement of underarm hair.”

In 1925, the peculiar “sleeveless sleeve” I’ve been showing was still around — this time, on a nightgown. I love the striped pajamas, too.

8 responses to “Sleeveless (and Almost Sleeveless) in 1924”