A fur-collared coat from Butterick’s Delineator magazine, December 1917. Butterick coat pattern 9535 had a convertible collar, a criss-cross belt, and gathered pockets — all frequently seen in patterns from 1917. 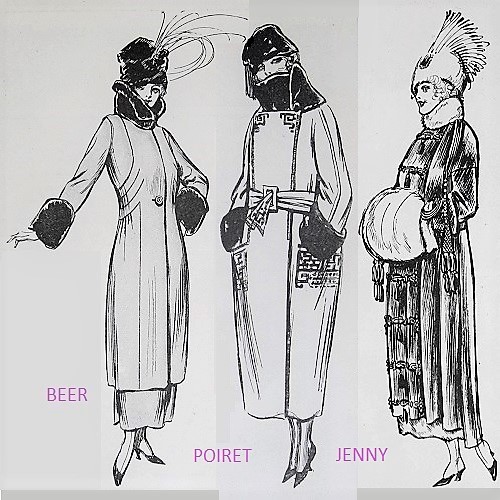 Paris designs were converted into Butterick patterns in spite of the war in France. This was the year of convertible collars that could come right up to the chin when buttoned, or spread over the shoulders like a shawl when unbuttoned. The hats are pretty spectacular, [or hilarious] too.

Coat 9556 “is made with the large collar shown on all the newest winter coats and it buttons up snugly at the front for cold weather…. It is as good-looking and becoming for young girls as for women.” This pattern was available for bust measure 32″ through 46.”

Coat 9556 was also illustrated in color on a different page: 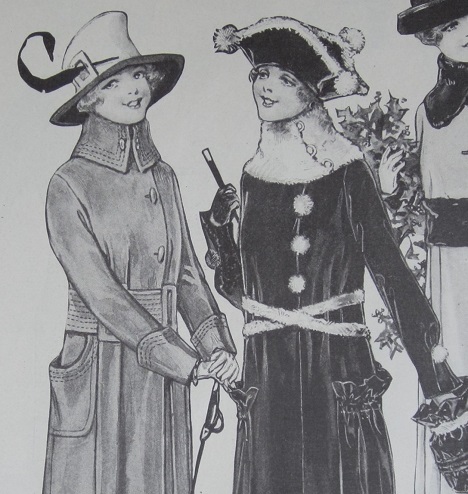 Description of coat 9535 from Delineator, page 76, Dec. 1917. On page 69 another description said, “There is the large cape collar that plays such a strong part on all the coats of the season.”

Butterick coat 9535, shown with its collar open. Notice its belt — very “1917” — and the peculiar gathered pockets. This is the same coat illustrated in color at the top of this post. 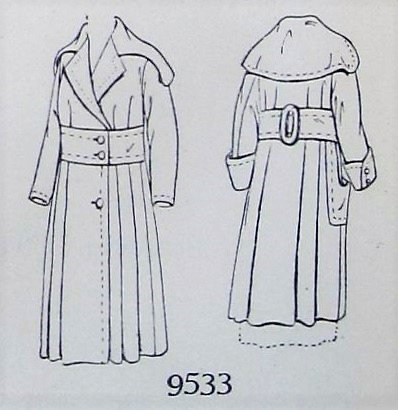 Butterick 9533 has one enormous, decorative buckle at the back. One version is 7/8 length, and has huge optional pockets.

Coat 9533 was sized for busts 32 to 44 inches. The straight silhouette “is youthful looking for the older woman….”

Since coat 9531 was illustrated with the collar open on page 76, its alternate view shows the collar closed. Cuffs could be gathered or turn-back. Clothes from this period often have a higher waist in back than in front.

Coat 9531, like the others, has a large cape collar and “deep armholes for comfort and wearableness.”

Coat 9567 was illustrated as worn by a young woman or teen (but, no, that’s not actually her graduation cap.) This was not an era for women who worried, “Does this coat make me look fat?” [See the coat by Paul Poiret pictured earlier.] I find the clothes of this period extremely unattractive. 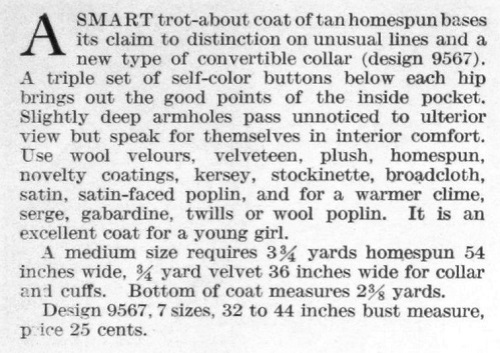 Butterick coat 9567, with its “new type of convertible collar” is “an excellent coat for a young girl;” the pattern was available from bust 32″ to 44.”

butterick Coat 9567 could have decorative buttons on the front; those on the back are for fastening the collar. Imagine that wide rectangle of collar pulled up and buttoned at the front of the throat. Like this: 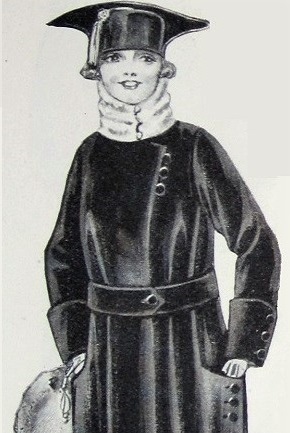 Coat 9567 was illustrated again on page 70 of the same issue:

Coat 9501, seen at the far right above, was shown in color in November: 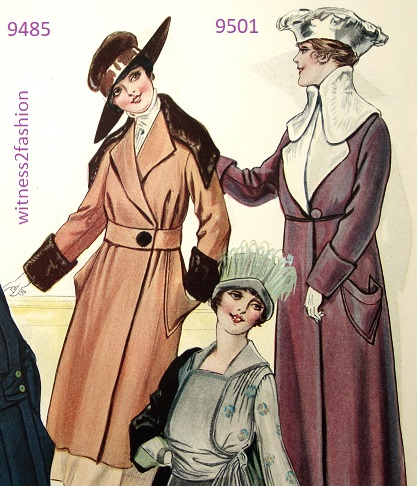 All of these coat patterns appeared late in 1917, but similar styles could still be purchased in 1921. 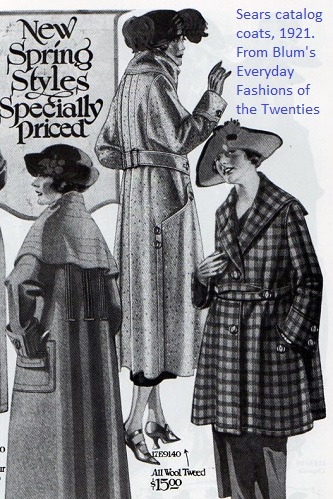 These coats appeared in the Sears catalog in 1921. The plain one, at right, has another kind of cross-over belt. From Everyday Fashions of the Twenties by Stella Blum.

A strange belt also appears on this vintage coat: 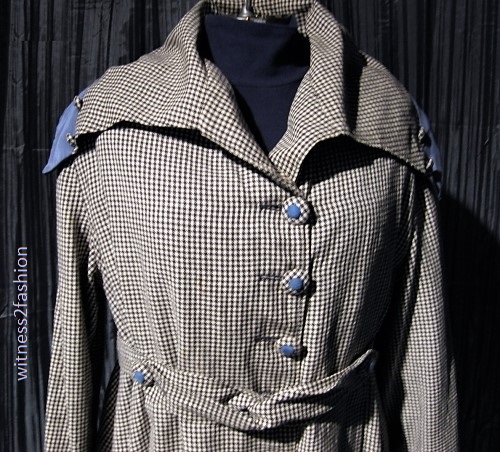 A light weight vintage coat from the WW I era. The checked fabric looks like linen. One side of the belt twists around to button to the other side. (One button is on the back of the belt, so it has to twist, unlike this one.)

The cape collar is trimmed with non-functional buttons, which match the blue band on the collar. 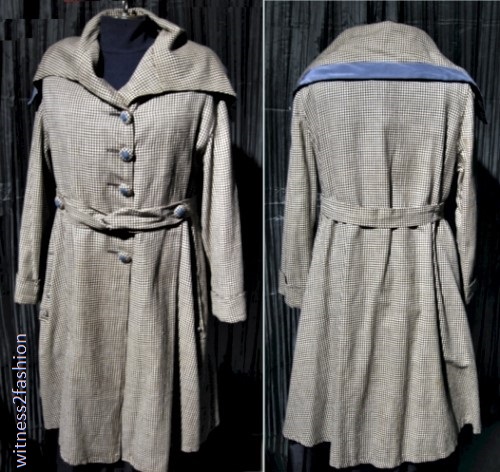 If I wanted to select an era when fashion was really inexplicable, it would be this one.

My aunt Dot, age 18, proudly posing in her fashionable coat. Circa 1917-18. A glimpse of her thin ankles reminds me that she was petite — not chubby — underneath that colossal wool cocoon.

This was also the era of the tonneau, or barrel, skirt. What were they thinking?