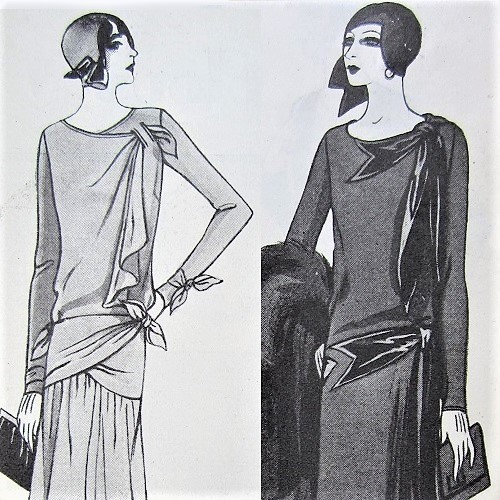 A bow at the hip, a bow on the shoulder, or both: Two Butterick dresses from December 1928. Delineator. The one at left even has bows at the wrist.

I confess, the dress at upper right is one of my favorites from the Twenties. Bows, and variations on bows, enhanced many dresses in 1928; here are a few from December of 1928. (Ninety-nine [CORRECTION: 89] years ago. [Thanks, Jacqueline!]  Let’s start with some bow variations: 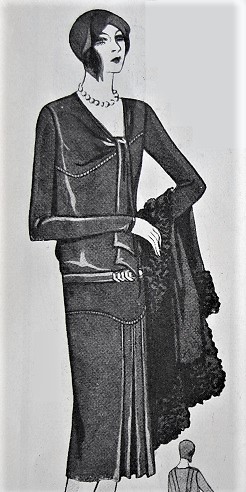 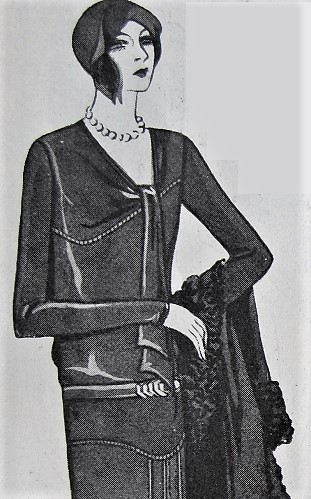 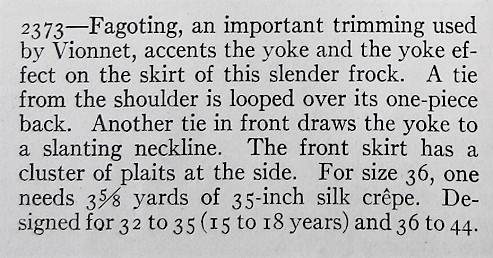 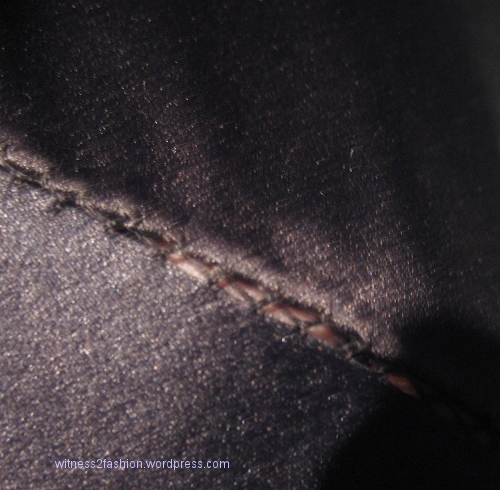 Two panels of a vintage dress joined by fagoting. 1920s. For more on Vionnet and fagoting, click here. 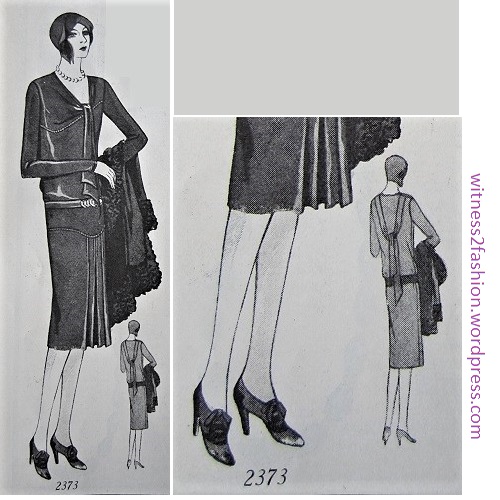 Butterick 2373, front and back views. December, 1928, Delineator. That long back tie helps narrow the rear view of hips. 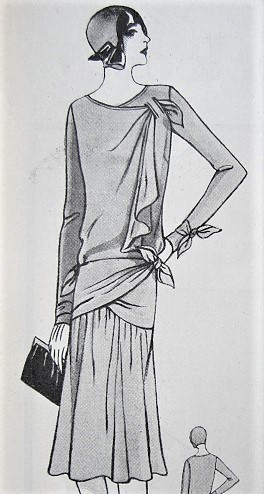 Butterick 2378 has the snugly draped hips of 1928, with the interesting not-exactly-a-bow insertion at the shoulder creating a slenderizing vertical line, and four bows — two at the hips and two at the wrists. Delineator, Dec. 1928, p. 30. If you look closely, you can see a side seam bust dart. 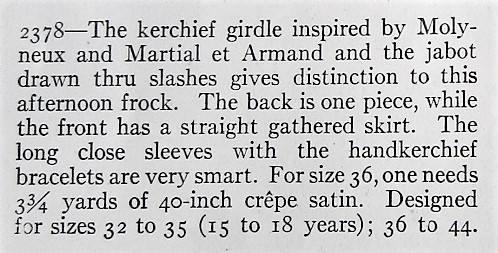 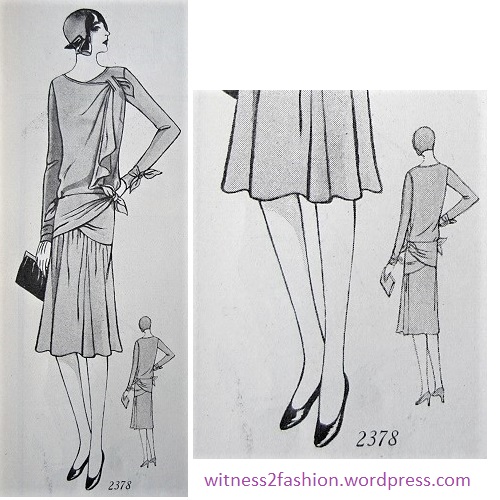 Front and back views of Butterick 2378. The “handkerchief girdle” is attributed to both Molyneux and the design team of Martial et Armand. Delineator, Dec . 1928, p. 30.

I like this dress so much that I wondered what it would look like on a more realistic figure. Imagine it in silk jersey: 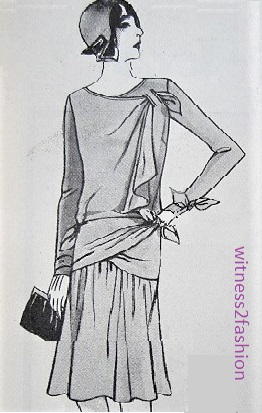 Illustration of Butterick 2378 manipulated to appear on a more naturalistic figure. It still looks good to me!

Most Butterick patterns from the 1920’s were sized from bust 32″ up to a 44″ bust measure — that would be a modern pattern size 22, a reminder that not all women in the Twenties had “boyish” figures.  The next dress has a soft drape, rather than a bow, but it’s recommended for older (and larger) women, so I though it worth sharing:

Butterick 2381 has an interesting yoke and skirt, but no bows. Delineator, Dec. 1928, page 30. It was recommended for “the older woman.” Notice the gathers at the shoulder, which would provide some fullness over the bust. 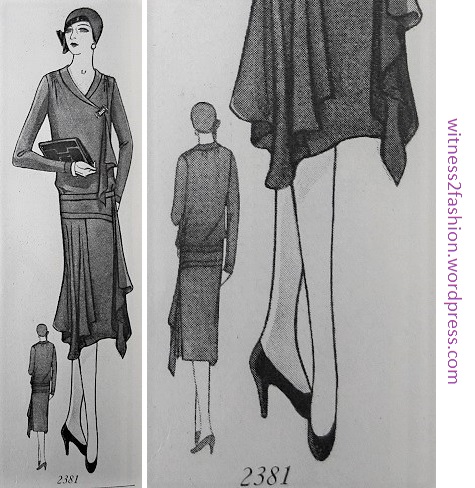 The vertical drapery and skirt panels in front would be flattering to a larger figure. The back view, with two horizontal hip bands? Probably not becoming to 52″ hips. Maybe it could use the clever, long, back tie from Butterick 2373.

This dress, which has a metallic (lame) bodice and velvet skirt, could be worn by misses 15 to 18 as well as women up to size 44″ bust. 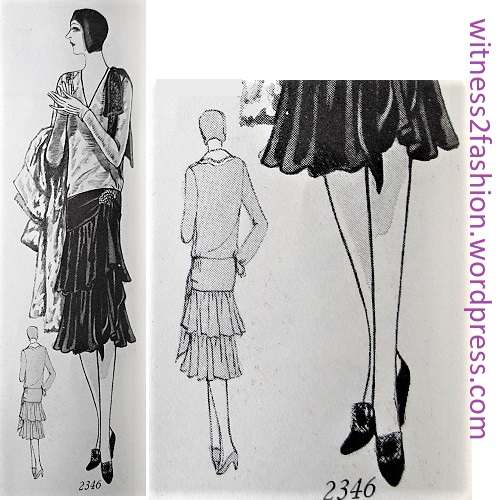 Front and back views of Butterick 2346. Delineator, December, 1928, p. 30. I wish I could find another description of this pattern, because it was common for a very formal day dress like this to also have a sleeveless version for evening wear. 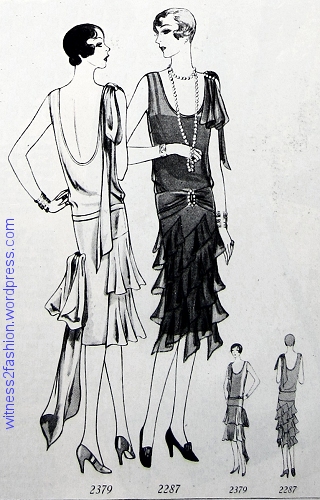 Bows at the shoulder on evening frocks, December 1928.

Butterick 2359 has velvet bows at shoulder and hip, but it does not have the tight hip girdle seen in these other 1928 fashions. 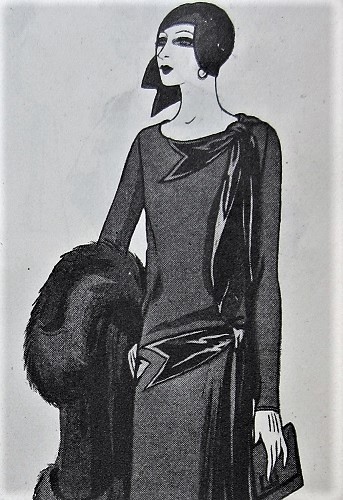 The diagonal hip bow is appliqued to the dress and can be tied to fit the hips tightly. In back, it forms a band. The back of the dress is cut in one piece; the front panel dips well below the hemline. 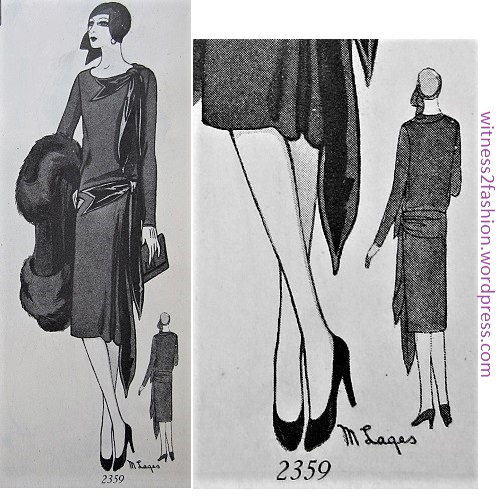 Front and back views of Butterick 2359, from December 1928. Delineator, p. 31. [When I think about how I would make this dress, with the weight of the hip bow and the stress that tying it tightly would put on the crepe fabric where the velvet gaps in front…. The inside of this dress might need some engineering to make it stay bloused this perfectly when worn by an actor.**]

Illustrations are by M. Lages.

Perhaps too much of a good thing, Butterick 2312 has three bows in a line from shoulder to hip. Delineator, Dec. 1928, p. 28. This is a dinner dress for young or small women.

The hem is longer in back than in front — it has “the backward dipping flounce that marks the new mode.” The dress has the curve: the flounce is “straight.” It attaches to an upward curve in front and a downward curve in back. The shoulder bow ends in a long streamer. 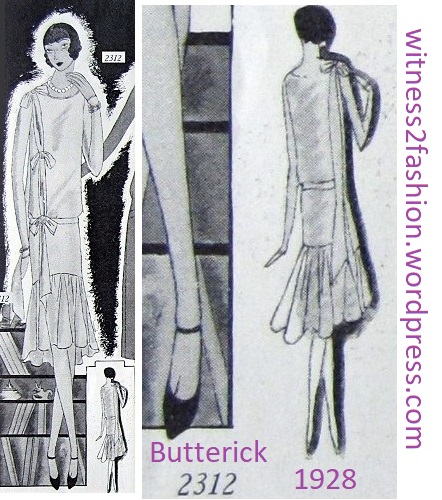 ** Unlike models, actors have to sit down and get up and move like normal people.  Costumers use the term “actor-proofing,” not as an insult to actors, but because it’s our job to prevent the costume from becoming a problem for the actor wearing it. “Mark Antony” shouldn’t have to worry about his toga falling off his shoulder — it took years of training for a Roman gentleman to master toga-wearing. Directors are always asking actors to do things that can’t be done in restrictive period clothing; it’s the costumers’ job to make the clothing look authentic but allow such movement 8 times a week, month after month. 1920’s two-piece dresses often suspended the skirt from an unseen bodice top (like a modern camisole.) That meant the skirt could hang straight from the shoulders, without being shaped to a waistband. If you want a blouson to stay bloused, you can attach it to that “skirt” so the blousing can’t slip down unevenly.