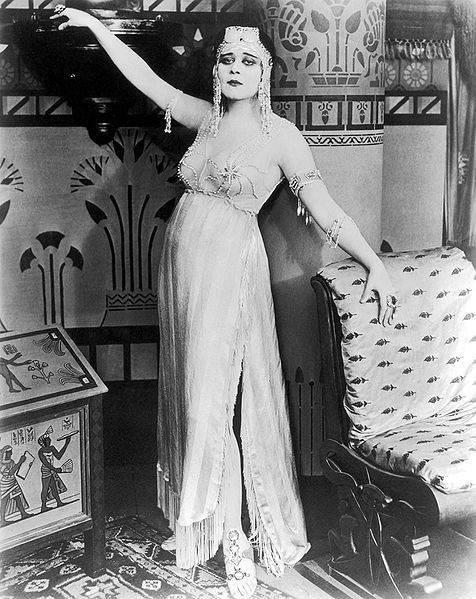 Public domain image of Theda Bara as Cleopatra, 1917. From WikiMedia Commons. She was at ease in very revealing costumes.

Bonus sighting of Cleopatra’s knickers: The 1917 film of Theda Bara’s Cleopatra is lost, but an attempt to reconstruct it from surviving footage and still photos is being made. The lavish and daring costumes make up in craftsmanship what they lack in authenticity. I especially love this sequence, in which Cleopatra rises from her throne to reveal, under her see-through dress, a pair of very un-sexy 1917 knickers or bloomers. Click here.       (The inter-titles assume you’re a very slow reader; be patient and wait for it….) The elastic seems to have been removed from the legs.

“Mother was right: always wear nice underwear in case somebody sees it….” Public domain image of Theda Bara as Cleopatra, 1917.

Since posting about the confusing names for 1920’s undies, I received wonderful comments, including this from The Vintage Traveler:

“Here’s my take, and I could be wrong. I’ve been looking at catalogs from 1918 through 1925, and I’ve found all the terms you’ve mentioned. I have not found anything referred to as a “teddy”. We used that term in the 1980s when the camisole/panty combination had a comeback. I don’t know if it was used in the 1920s.

“Step-in combinations are different in that they have to be literally stepped in to. The partition between the legs is sewn rather than buttoned and so the garment cannot be pulled over the head and onto the body. It’s easy to see why the combination was starting to be divided in two pieces. How on earth would one be able to use the toilet without completely undressing?

“For the life of me, I can’t see why Butterick 6194 was called knickers. I’ve read all kinds of explanations about why Americans used bloomers/panties/stepins while the British called the same garment knickers. From what I can see, “knickers” was rarely used in the US to denote an undergarment. But from your example we can see that it was, on occasion, used in that way.

“As for outerwear, bloomers are full, and they close at the bottom with elastic. Knickers are much less full, and close at the knees with a band that buttons.”

And this from Dee, who has a 1931 Home Economics textbook:

“I have a high school home economics book, Fabric and Dress, copyright 1931, which includes a table of materials suitable for underwear. It lists slips, teddies, step-ins, bloomers, shorts, brassieres, shirts, union suits, pajamas and gowns. Shirts and union suits are listed as uses for stockinette, and it is indicated just prior to the table that pajamas and gowns are nightwear. There are also references to previous styles of undergarments: Petticoats, camisoles, and this interesting one “Pettibockers (full bloomers drawn in below the knee) were popular when skirts were long. The style of short skirts changed this undergarment, by shortening it and taking out some of the fullness.”

“I also found it interesting that in the chapter which goes over a bit of fashion history, with an emphasis on the “follies of fashion”, (i.e., 18th century headdress, Elizabethan ruffs, 1860 hoopskirts) there is a reference to “Another more recent fashion, which will probably seem as absurd as many of these when it becomes long out-of-date, is the very short skirt of 1928 and 1929, which was about three inches above the knee.”

Sometimes I love the internet!