This costume is nostalgic for me. I can still sing the first line of the Chiquita Banana song: “I’m Chiquita Banana and I’ve come to say….” But I had to look up what it was that she said! 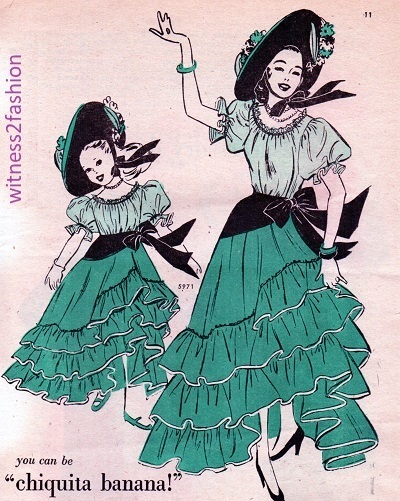 You would be gathering and bias-tape-binding yards of ruffles if you opted for a “Chiquita” costume. The “banana” doesn’t seem to come into it.

Text for the Butterick pattern. It was not issued in time for Halloween, but I bet lots of amateur theatricals had “Latin” numbers.

Butterick apparently licensed the rights to call its costume pattern by this name, although it bore very little resemblance to the original, which had a bolero top with ruffled sleeves. 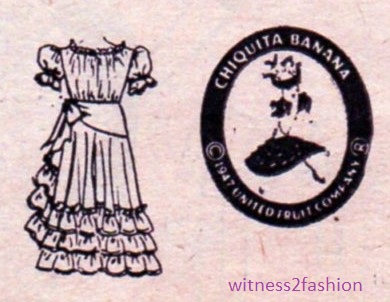 Alternate view and Chiquita brand logo, 1951. Chiquita’s was meant to suggest a basket of fruit — with her stem sticking up through the center.

The Chiquita company still uses a ruffle-clad woman in its logo.

The song first appeared as a radio advertisement in 1944 — and its purpose was to tell people how to recognize a ripe banana, and to remind them not to store bananas in the refrigerator.

“I’m Chiquita banana and I’ve come to say – Bananas have to ripen in a certain way – When they are fleck’d with brown and have a golden hue – Bananas taste the best and are best for you – You can put them in a salad – You can put them in a pie-aye – Any way you want to eat them – It’s impossible to beat them – But, bananas like the climate of the very, very tropical equator – So you should never put bananas in the refrigerator.” — Chiquita Company Jingle

By 1951, when this pattern was issued, people could see the animated commercial in movie theaters and on TV. The tune was embedded in my brain by the time I was six. The Chiquita Company says, “At its peak, the jingle was played 376 times a day on radio stations across the United States.”

Thanks to YouTube, you can watch the original animated Chiquita ad by clicking here.

Astonishingly, a version of the song with less obviously instructive lyrics became a huge hit, covered by many singers. Here is one such version. Inevitably, the song was linked to Carmen Miranda in the public mind. If you search for a Chiquita banana costume today, you’ll find lots of Carmen Miranda costumes instead. A documentary about her is called Carmen Miranda: Bananas Is My Business. [I just learned that she has been credited with popularizing platform shoes!]

Many internet sources say that Miranda wrote the ad jingle. She didn’t.

Sarah Skwire wrote delightfully on this topic, so I recommend you click here to read her essay on the wildly popular Chiquita Banana song. She is right about the wartime scarcity of bananas; I remember reading a memoir of British writer Evelyn Waugh in which his children watched him eat the first banana they had seen in years. They remembered it because he ate it in front of them and did not share even a bite.

Daina Beth Solomon has written about the commercial’s resultant “Latina” stereotyping in her essay “Miss Chiquita Banana: Here to Stay, for Better or Worse.”

All things considered — history-wise — I wouldn’t rush to make a nostalgic Chiquita Banana Halloween costume today — even though it does look much better in this red, yellow, and black version used on the pattern envelope.

Color image from A History of the Paper Pattern Industry by Joy Spanabel Emery. Please do not copy.