These suits are for girls 8 to 15. Today the girls illustrated might be in middle-school — or starting high school — but their clothes could have been worn to the office in the late 1920’s. Yes, it is 1930, so they are actually a bit behind the fashion trend to longer skirts and natural waists. Nevertheless….

Well, the button-on skirt would not be worn by a grown-up (very little boys did wear button-on pants.) 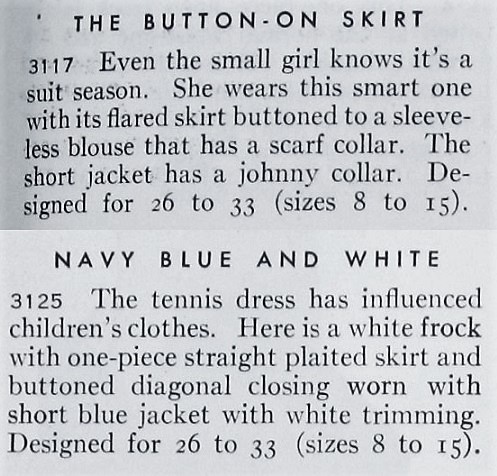 But the “tennis dress” frock with its diagonal closing is pretty sophisticated.

Alternate views of 3117 and 3125. Under their jackets, they are sleeveless.

Coordinated coats and dresses — an ensemble — were chic womens’ wear.

It’s hard to imagine eight to thirteen-year old girls wearing these dresses and suits to school today, but the 1930’s were an era when children had to grow up fast.