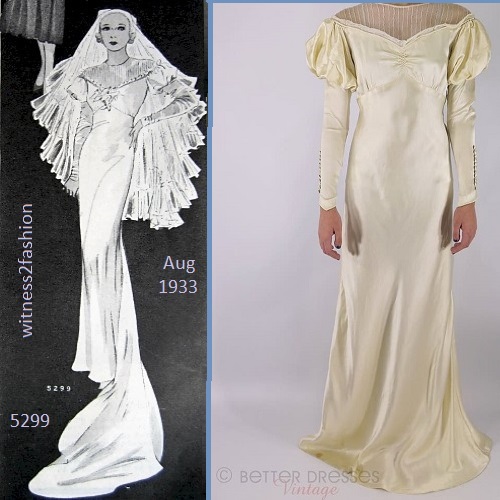 Left, Butterick Starred Pattern 5299, a copy of the wedding dress worn by actress Helen Twelvetrees in Disgraced; right, a vintage wedding dress made from this pattern.

Some time ago I wrote about Butterick Starred Patterns. As far as I know, only twelve Starred Patterns were issued; they were exact copies of movie costumes by top film designers. 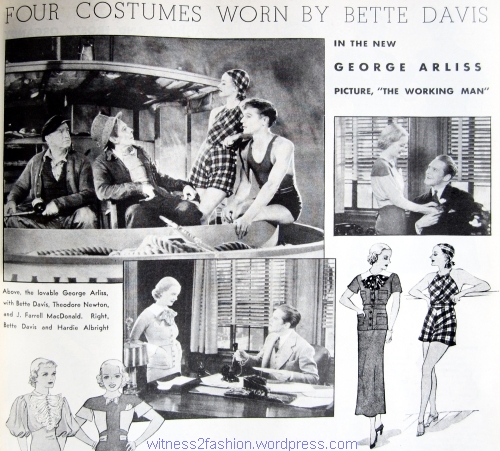 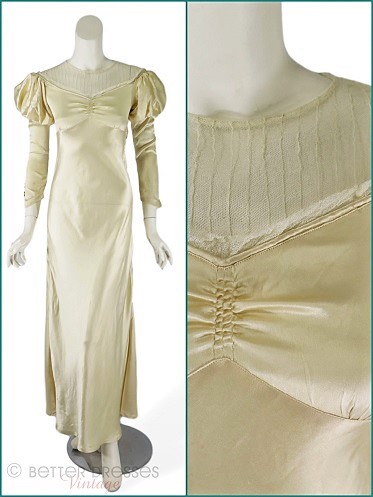 …along with the Butterick pattern used to make it.

Back of Butterick pattern 5299, used with permission of Better Dresses Vintage.

Image from the Deltor (sewing instructions sheet) inside the pattern envelope. The corsage hides the shirring (“gathers”) on the bodice. 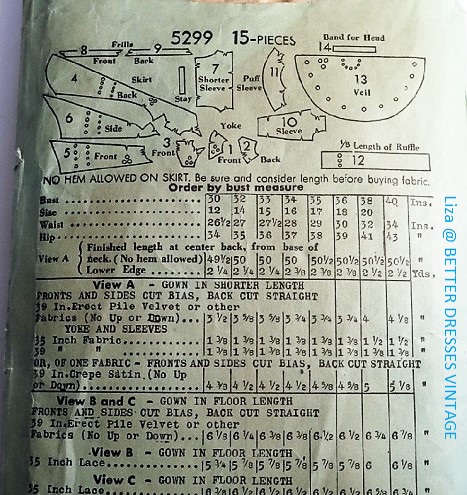 Shape of pattern pieces from the back of the envelope.

I am very grateful that Liza shared these photos with me! As if that connection with a rare Butterick pattern weren’t enough, this was the “cherry on the cake:” the bride had torn a page from Delineator magazine on which this wedding dress was illustrated, and saved it inside the pattern envelope!

Liza D found this page from Delineator, September 1933, folded inside the pattern envelope.

Here is a clearer image of that wedding gown illustration.

It was originally featured in an article which showed the gown as worn in the movie — these illustrations come from Delineator’s August 1933 issue:

Liza realized that “Dot’s Wedding Dress,” as it says on the pattern envelope, was made for a small woman, not the six-foot fashion mannequin she originally photographed it on. (Look at the sleeve length:) 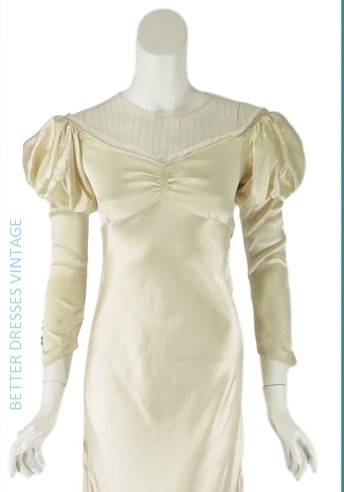 The dress on a too-tall mannequin; those sleeves should be wrist length.

The 85-year-old dress on a model the right size is still beautiful. Cream colored satin dresses were a chic Thirties’ choice.

Puffy “Directoire” sleeves made a comeback in the early 1930s.

It’s not often that a vintage gown can be dated this precisely when we don’t even know the full name of the bride, or her wedding date. [Edit 1/27/19: Liza says, “I know the bride’s name and who she was, because I asked the family I acquired it from. She was their mom’s cousin. Yes, I’ve asked them to share a photo of her in it if they come across one.”  We can hope!]  We do know that she read Butterick’s Delineator magazine 🙂

Butterick 5299 was used for this 1933 wedding dress, beautiful enough for a movie star.

Liza D says it was made without a train, “perhaps for an in-home or informal wedding? There was no veil included.”

I am very grateful that Liza D remembered reading about Butterick Starred Patterns in this blog, and that she was willing to share these photos of her unusual vintage find! Check out this dress (and the pattern) and her other items for sale by clicking here. Thanks to her daughter, too.

P.S. If you missed my five posts on Starred Patterns, here they are: (Sorry I about the font size!)