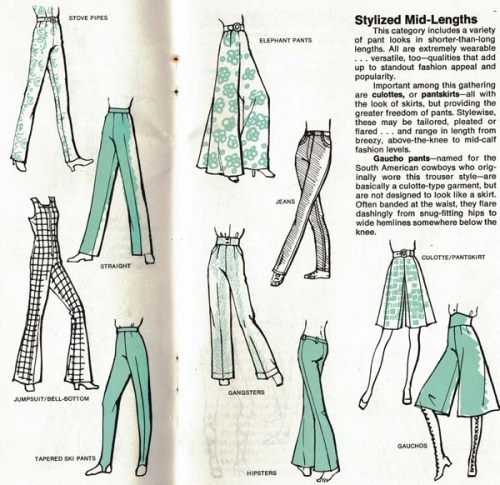 Image from 1971 Vogue booklet Everything About Sewing Pants and Jumpsuits. Courtesy of Lynn Mally.

Lynn Mally at American Age Fashion wrote about her “find” last week: a 1971 booklet from Vogue patterns, Everything About Sewing Pants and Jumpsuits. Since I had been wondering whether my memories of vocabulary from this era were correct (or possibly just regional) I was delighted by her blog on this very topic.

I asked if I could enlarge some of the images so the labels would be easier to read. Here are the results:

Lynn and I agree that we wouldn’t call them “elephant pants;” I opt for “palazzo pants” and Lynn offered “just wide legged pants today.”

We agree that the “gangsters” are now “Hepburn style,” with a pleat in front. Lynn quoted advice that “Even the short, curvaceous woman could look good in pants, especially if she chose straight-legged styles to add height.” I am a tall “curvaceous” woman who always searches for straight legs — by which I mean that the circumference at the ankle is not obviously smaller than the circumference at the thigh. (Costumers’ fact: 16″ is the narrowest trouser cuff a man can take off without removing his dress shoes. Does the actor make a fast change? Choose trousers for him with at least a 16″ circumference at the ankle.)

Jeans are the classic Levis worn by working cowboys and generations of young people. They are similar to stovepipe trousers. These “Hipsters” seem also to have flared legs (wider than “Boot” legs.)

I called low-waisted jeans and trousers “hip-huggers;” “hipsters” were people.

Ski pants and a bell-bottomed jumpsuit from 1971.

Those ski pants, held taut by straps under the foot, had been around since the 1950s. Stretch gabardine was becoming available. “Bell-bottom” trousers were originally copied from sailors’ pants. For a few years the U.S. Navy was right in step with women’s street wear. (Old song: “Bell-bottom trousers, coat of navy blue; he’ll go skipping up the rigging like his daddy used to do.”)

Culottes (aka a pantskirt) usually had pleats, like the ones shown here; when you stood with your legs straight, they appeared to be a pleated skirt, rather than a “divided skirt.” Gaucho pants didn’t have pleats, so it was obvious that they were pants. (They look like the “elephant pants,” shortened, but were not made of soft, flowing fabric. [However: see culotte pattern 5586, far below.] 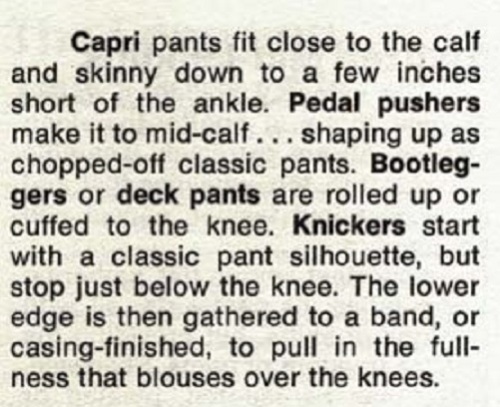 In 2019, we are used to seeing skintight “leggings” worn without a covering tunic blouse or dress. These tight, close-fitting Capris probably look attractive if you’re used to our current tight clothes. However, these 70s’ versions did not benefit from stretch fabrics and were usually made of poplin or another non-stretch, non-knit fabric. Mary Tyler Moore looked great in them on the Dick Van Dyke Show in the 1960s, but they were controversial.

If they were cuffed and rolled up, pants (the ones  now called “cropped”) might be described as “deck pants ” or “clamdiggers.” Knickers appeared until the 1980s, although they did not flatter many figures. I only saw them worn by very young women — they were rather “costumey.” 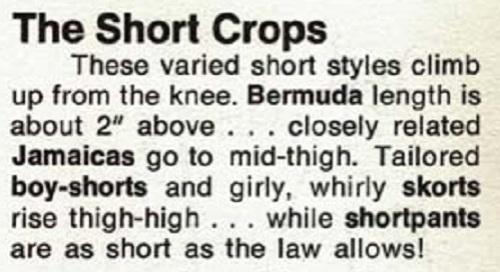 Bermudas stopped at the knee; Jamaicas were shorter.

This was a “Preppie” fashion (“yes, we are collegiate!”) and most people called any thigh-covering shorts “Bermudas.” For perfect 1960s’ Preppie shorts, Indian Madras plaid was the favored fabric — although the real thing ran (“bled”) when washed….

“Boy shorts” were the most modest option. If you bent over while wearing a “skort” or “hotpants,” your butt cheeks showed. I owned a skort in 1971, but quickly realized that I had to wear matching dance briefs when riding a bicycle. (It had looked modest enough standing still, in the dressing room….) I never heard the word “shortpants.” These are “hot pants.” If you made your hot pants by cutting the legs off a pair of jeans and leaving the edge frayed, you had “Daisie Maes” (after the character in the Li’l Abner cartoon strip) or “Daisy Dukes” (after a character on the TV show Dukes of Hazzard.

As a sidelight: when women proved not eager to trade their mini-skirts for midi-skirts, mid-calf skirts that buttoned down the front were sometimes worn open over hot pants as a sort of compromise. Not for the office!

As I said before, fashion nomenclature is variable. A quick flip through patterns produced these: 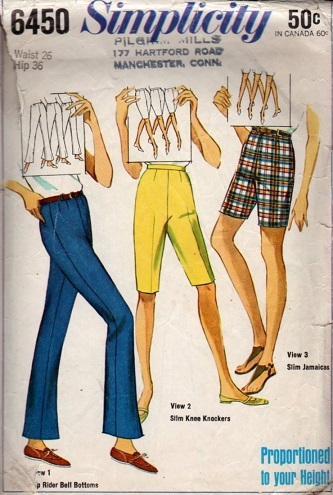 19 responses to “Capris or Pedal Pushers? Pants Vocabulary from 1971”