Scallop-shaped button tabs from 1930. Sometimes they are bound with bias tape. The ones on the left may be topstitched, instead.

Sometimes a minor fashion detail will catch my eye as I browse through photos. I don’t think this one was a major fashion trend, but it does show up enough for me to make quite a collection of examples. Scalloped hems had been seen in the 1920s, but these button tabs seem to be a 1929  – 1931 feature. They are shown on women and children.

Scalloped button tabs on a woman’s tunic and a girl’s dress. Butterick patterns, 1930.

Sometimes they appear on skirts.

Scallops are a theme on the collar and button tabs of this dress from October 1930.

I think the dark outline of the scallops is not bias binding, but the artist’s attempt to show a shadow. The tabs on the skirt hold a pleat in place. They probably don’t unbutton.

A “tailored” wool dress. “Like many this season, it’s a buttoned frock with scallops used smartly.”

I’m not sure how popular bias-bound scalloped button tabs would have been with home stitchers…. It’s relatively easy to make a scalloped edge when it is finished with the garment’s lining, like the hem of this blue dress:

The blue dress on the left has a scalloped hem lined with gray taffeta. Butterick pattern from 1926.

Left: A day dress from 1929 has scallops at the waist, the collar, and the hem. The hem appears to be bound with bias tape.

This apron from 1931 uses bias tape for trim and to bind the edges of hem, neckline, armholes and waist ties. 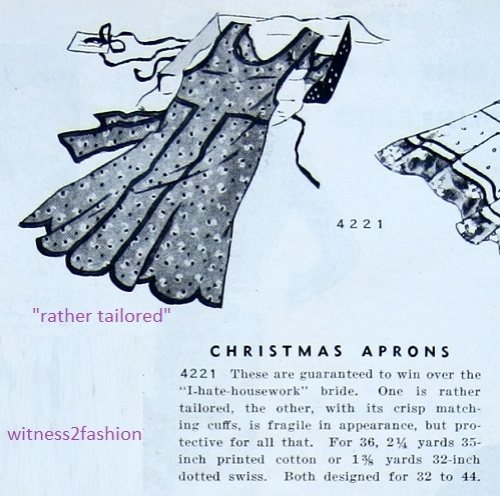 The curved part of the scallop is easy to bind, but the points where the curves meet take some practice.

Scalloped button tabs on a blouse and skirt, Butterick 2916. November 1929.

The blouse and skirt on the left, Butterick 2916, was illustrated on two pages of Delineator, November 1929. Note the natural waist (a new fashion) and the  knee-length hems (about to go out of style.)

There are subtle differences, like the color of the attached scarf and the size of the buttons.

Two versions of Butterick 2916. 1929. The blouse tucks into the skirt, which has matching scallops.

It’s likely that many of these scalloped button tabs were purely decorative, and the dresses opened under the arm, along the side seam.

Scallops showed up on house dresses… 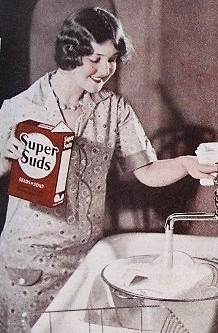 A series of rounded button tabs on this suit are not actually scallops. The text commented on the natural waist of this suit. Butterick 3151, April 1930.

Scallops had long been popular on girls’ clothes. 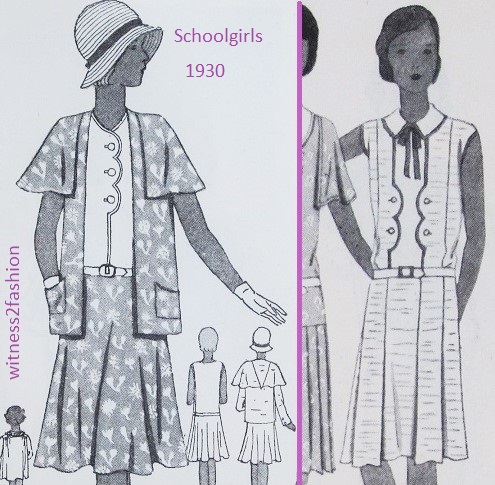 The next illustration gives us a combination of scallops and straight lines! Probably artistic license….

One armhole and one side of the neckline have scallops. The buttons have scalloped tabs. Illustration for an article on sportswear, Delineator, May 1930.

Occasionally the button tabs took on an angular, zig-zag quality: