My local newspaper regularly runs large ads from a plastic surgery clinic, showing before and after photos. The ads that annoy me the most are ones suggesting that a tiny, turned-up nose on women is preferable to an “ethnic” nose — regardless of how it would relate to her other features.

This focus on the “perfect” nose isn’t new. I found ads for two competing “nose shapers” in the same issue of this Motion Picture Magazine from December, 1921. 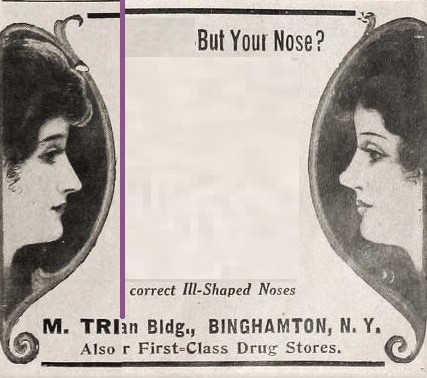 Which is the “Before” and which is the “After?” Trilety ad from Motion Picture Magazine, Dec. 1921.

Other ads for the Trilety Nose Shaper clarify the problem: Pug noses were not in fashion with M. Trilety.

Ad from Motion Pictures Magazine, 1923. (To be fair, actor Michael Caine*** has also advised that no one wants to see inside your nostrils in a close-up on the giant screen.)

The Anita Nose Adjuster was not specifically concerned with pug noses:

“Refined features attract; misshapen features repel. Such is nature’s law. If your nose is ill-shaped, you can make it perfect with ANITA NOSE ADJUSTER. In a few weeks in the privacy of your own home and without interfering with your daily occupation, ANITA NOSE ADJUSTER shapes while you sleep — quickly, painlessly, permanently and inexpensively. There are many inferior imitations, but the ANITA NOSE ADJUSTER is the ORIGINAL and ONLY comfortable adjuster highly recommended by physicians for fractured or mis-shaped noses. Write to-day for free booklet, “Happy Days Ahead.” No obligations. 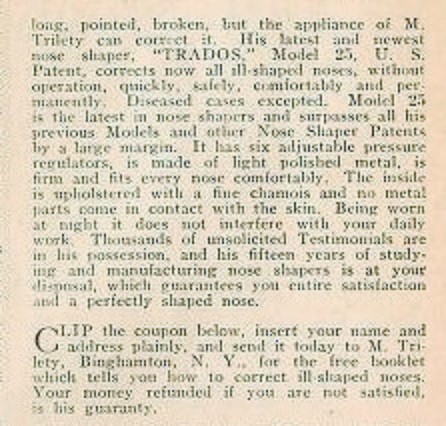 More from the “How the Shape of My Nose Delayed My Success” Trilety Nose Shaper ad, 1923.

Model 25 “has six adjustable pressure regulators, is made of light polished metal, is firm and fits every nose comfortably. The inside is upholstered with a fine chamois skin and no metal parts come in contact with the skin. Thousands of unsolicited Testimonials ….”

It’s incredible how long this company lasted, considering its offer of “your money refunded if you are not satisfied.”

One of the concepts that got me through my teen years was the realization that there is a difference between being pretty and being beautiful. The bust of Nefertiti in the Egyptian Museum of Berlin shows a woman who is beautiful by the standards of almost any nation and era.  Many girls are pretty, at least for a brief time when they have youth and health working for them. But mere prettiness is much more common than beauty, which may require a certain amount of maturity and experience of life. Sophia Loren and Audrey Hepburn were inspiring to me in the 1960s, because they were beautiful, rather than pretty. They didn’t have blonde hair or tiny, turned-up noses, or perfectly regular features. They were not “cute.” Neither was Greta Garbo. Maybe confidence, and feeling comfortable being who you are, is more important than trying to conform to “the norm.” Josephine Baker from St. Louis, MO, made herself the most glamourous woman in Paris — couturiers sent her free dresses and begged her to wear them.  Would Frida Kahlo have been more beautiful with a tiny nose and plucked eyebrows?

*** Sir Michael Caine has written more than one book about acting on film, as well as making an entertaining Video in which he explains why a simple thing like smoking a cigarette while delivering lines in a movie is much harder than you’d think.