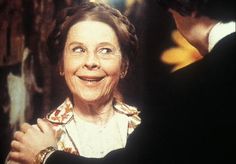 I am indulging an old addiction by re-reading all of Ruth Gordon’s non-fiction books. Most people know her from the movie Harold and Maude, (in which she is perfectly cast!) but she was already a well-known stage actress. (She started in 1915, flunked out of drama school, wouldn’t give up; by the 1930s she was a huge hit in London and on Broadway; she gave 1,078 performances as Dolly Gallagher Levi in The Matchmaker, and was nominated for a Tony award in 1956.)
She was a playwright (selling an autobiographical play to MGM for $100,000 in 1952 — it’s called The Actress, and Spencer Tracy plays her father;) a screenwriter (5 Oscar nominations with her husband Garson Kanin, including the Tracy/Hepburn comedies like Adam’s Rib.)
And she won her first Academy Award as Best Supporting Actress in Rosemary’s Baby in 1968-69. (She was 72 years old; she’d been acting since 1915.)  Accepting it, she said, “I can’t tell ya how encouragin’ a thing like this is….) See her acceptance speech here:
She published three books in her 70s and 80s; won an Emmy when she was 83 ….  In other words, a good role model for all of us!
I want some of her zest for life to rub off on me. (And her memory for funny stories. Among her many, many friends: Harpo Marx, Thornton Wilder, Charles Laughton, Helen Hayes, Lillian Gish, Dorothy Parker, Walter Matthau …. A lot of laughter!)

Typical story: In the 1910s, Ruth was still a nobody, but she was friends with a Broadway star who asked her to keep her company on the way to a movie audition. The would-be movie actress was asked to improvise a scene. She was shown a movie set which contained a table with a vase of flowers, a letter, and a pistol. As Ruth described the try-out, (I’m paraphrasing:) The actress enters the room. She goes to the table. She sees the letter. She opens the letter. It’s bad news. It’s terrible news! She sees the gun. She picks up the gun. She shoots the letter.

And she didn’t get the part! I guess the studio already had a comedienne.

Another story: When Gordon was a Broadway star herself and a member of the Algonquin Round Table (along with writers and wits  Robert Benchley, Alexander Woolcott, Dorothy Parker…,) she was also a friend of silent movie and stage star Lillian Gish and her sister, Dorothy. The Gish sisters were living in an apartment in New York. The apartment was on an upper floor, and the Gish sisters had a pet parrot. Its wings were clipped, so it was free to wander around indoors. One summer day, they forgot that the window was open and let the parrot out of his cage. It hopped on to a chair, then on to the table, and then, to their horror, it hopped up on the windowsill and flew out the window — and immediately realized that it couldn’t fly.

Luckily it landed on a canvas-covered truck, rode to New Jersey, and was returned to the Gish sisters, a sadder but wiser bird.

But I don’t read Gordon’s autobiographical books just for the laughs. She writes as if the reader is an old friend, so reading her is like chatting over lunch with a fabulous friend who is wise and shrewd and full of stories, with 80 years of life experience and still interested in everything.
She’s very honest about her life — triumphs and failures, happy memories and regrets. Her first husband died when he was only 36; (she was several years younger.) Later, after an affair with a married man,  she chose to raise her illegitimate son, rather than pretend he was adopted, as other stars did in the same situation. She was often broke, embarrassed by owing money to her more successful friends. When she was successful — as an actor and a writer — she wore couture and loved it. (Of course she wrote about the experience of shopping couture; the pink satin gown she wore while accepting her Oscar was a Givenchy.)
She has total recall of every dress her mother made for her or that she wore early in her career. (And I wonder, exactly what was “tango-colored” in 1913?)
But she also writes about poverty in her teens, when she and her factory-worker father sold everything — including her few childhood books — to pay for her mother’s care after a stroke. Struggling to get a start in her acting career, she was hungry enough to consider the “casting couch” route. If you want to know what it was like to tour with a play that opened in a different city every day, Ruth can tell you. (Some hotels didn’t accept actors, so she claimed to be a traveling saleswoman for Onyx Hosiery.)

She made headlines during World War II:
“‘Actress forty-six marries film director thirty.” Her husband said he liked the headline. “If it said ‘Actress forty-five’ a lot of people would say ‘She’s fifty if she’s a day,’ but when an actress says she’s forty-six, you have to believe her.” It was a long, happy, successful marriage and writing collaboration. And the snappy exchange of dialogue in those Spencer Tracy/Kathrine Hepburn movies was the work of Ruth Gordon and her husband, Garson Kanin. (Adam’s Rib, Pat and Mike, etc.)
Incidentally, the only award she usually mentions was that Oscar in 1969.  In 1915, The American Academy of Dramatic Arts told her “Don’t come back. You don’t show any promise.” In 1968, they asked her to come back to give her an Award for Achievement and to make a speech to the students. Boy, did she!
Here’s Ruth:

“I think what it takes is don’t give up! DON’T GIVE UP! Just don’t give up and that sounds like a put-down, but it isn’t. And it sounds as though it’s easy and it isn’t. DON’T GIVE UP! I learned that at the Academy and it was all I did learn. It wasn’t what my father paid four hundred dollars [tuition] for, but it may be the best lesson I was ever taught. DON’T GIVE UP! …. At the end of the year [Mr. Sargent] said, “Don’t come back. You don’t show any promise….”
I was scared. I was scared I wouldn’t find out how to be an actress because in that year the school hadn’t taught me. I’m smart and I can learn, but the school hadn’t given me a clue. Four hundred dollars and all I got for it was fright, because even to myself I didn’t show any promise….  ‘Don’t come back,’ he said. That’s a terrible thing, you could drop dead…. You could kill yourself…. You could give up….
Or you could learn something. Isn’t that what we came to the Academy for? So I learned something and what I learned here was and is DON’T GIVE UP…. When somebody says to you,”You’re not pretty enough,” “You’re too tall,” You’re too short,” “Your personality’s not what we’re looking for,” DON’T GIVE UP!’ “

I bet she enjoyed saying every word of that! And she said a lot more, too…

“Most every moment along the way takes courage. Courage is like a strain of yoghurt culture, if you have some you can have some more.” (From An Open Book.)

Start by reading My Side, her autobiography. Published in 1976, available in paperback or hardback. Her style is conversational; she skips from topic to topic and memory to memory as if she was chatting with you, but once I decided to go with her flow, it was wonderful! And, if you want to know more about shooting movies, Ruth tells you the details of filming Harold and Maude.
Next, An Open Book,  published in 1980. (It includes that lecture at The Academy.}

Then, if you’re hungry for more,   Myself Among Others , published in 1971. You probably haven’t heard of many of the early 20th century celebrities Gordon knew well and writes about. Luckily for me, I bought an anthology of articles and celebrity photos from Vanity Fair magazine in the 1920s when I was a teenager in 1960 and didn’t own many other books. This photo of Leslie Howard permanently warped my idea of “an attractive man.”

How to wear a top hat, white tie, and tails: Leslie Howard photographed by Steichen for Vanity Fair, 1934.

Not only did this book prepare me for many of the plays I have designed costumes for, it acted as my first door into a different era, with jokes and essays by many writers and critics who were household names in the 1920s and 1930s.  If you love those decades, it’s full of photos and articles — not about the 1920s and 1930s but from the 1920s and 1930s. Many copies are available online, from under $4.

So, in addition to Ruth Gordon’s various memoirs,  I also recommend Vanity Fair: A Cavalcade of the 1920s and 1930s, edited by Cleveland Amory and Frederic Bradlee.

Clara Bow, photographed by Dyer for Vanity Fair in 1928.

And if you haven’t seen Ruth Gordon at work as an actress, forgive Harold and Maude for being so “Seventies” and just watch a genius at work. (It’s on YouTube and on Prime.) A big part of acting is listening — I just watched a brief clip and now I want to watch the whole movie again. Gordon also gave a Golden Globe-winning (and Oscar nominated) performance as Daisy Clover’s mentally ill mother in Inside Daisy Clover. (1966) It is not a good movie, but Gordon is truthful and real in every scene she has.