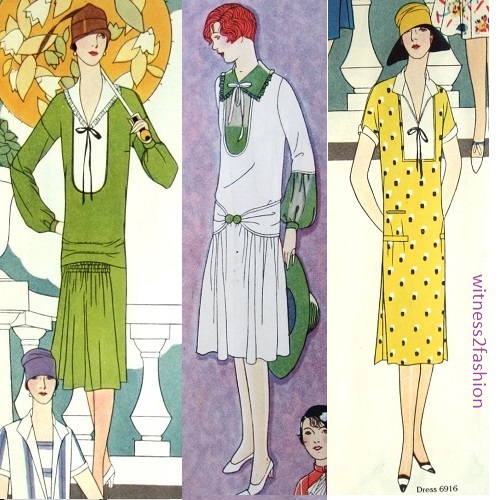 Three dresses with bib or plastron fronts, from Delineator, July 1926.

Costume designers know that for most stage actors it’s a good idea to choose designs that draw attention to the face. (It’s much easier to hear the dialog when you can see the actor’s lips moving….) The contrasting color of bib front dresses is one flattering 1920s’ trick for drawing the eye up from the hip width and toward the face and upper body. 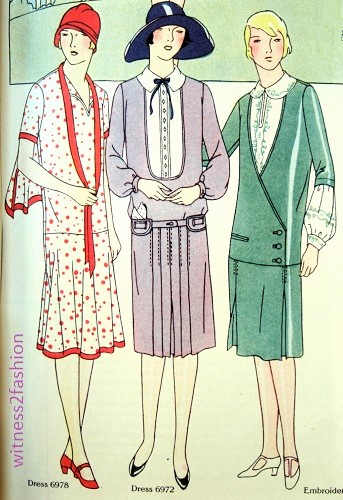 Center, a lavender dress with white bib front. Butterick 6962 from August 1926. (Notice the “tricks” used on the other dresses to lead our eyes up from the hip toward the face.)

The “gilet” or “plastron” or “bosom” front is a style that was shown on Butterick patterns in 1925 and 1926. I call them “bib fronts” because they remind me of the stiff, starched bib front on men’s formal shirts: 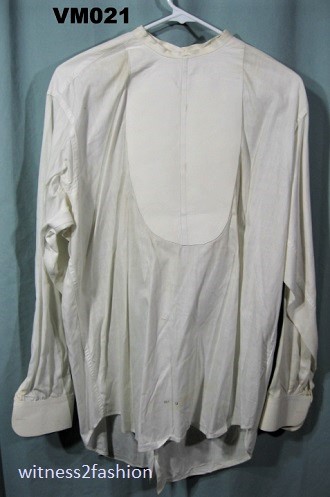 This man’s shirt has a starched white plastron front which would be decorated with a row of gold, onyx, mother of pearl, or even diamond studs. The real buttons, where the shirt opened, were in back.

That particular shirt would have been worn with stiff detachable collar and a tuxedo or white tie and tails.

This report of Paris fashions from 1926 calls it a “bosom, gilet, or plastron front.” 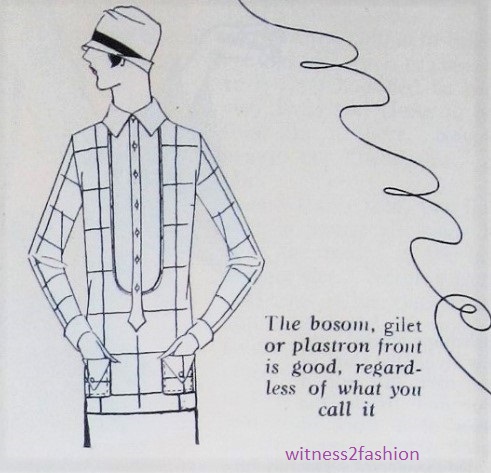 A Paris fashion report in Delineator, April 1926, touts the “bosom, gilet or plastron front” for women’s wear. I call it a bib front.

It offers some strong vertical lines to counteract the horizontal line at the hip. 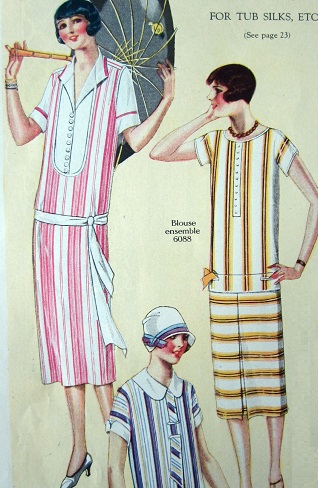 There are plenty of vertical lines on these dresses from June 1925. A plastron front (at left) often had a row of buttons, as well.

In the same Paris fashion report, Delineator showed this dress: 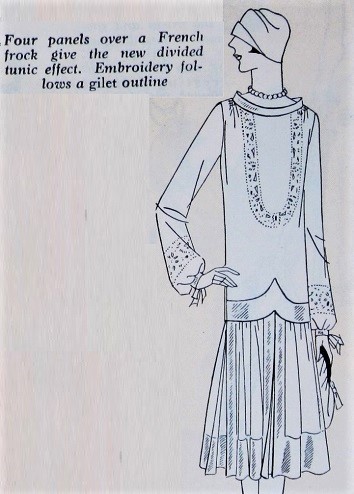 On this dress supposedly from Paris, a row of embroidery follows the same lines as a long necklace, creating a “gilet outline.”

Butterick copied that dress quite literally, if it wasn’t actually invented by Butterick: 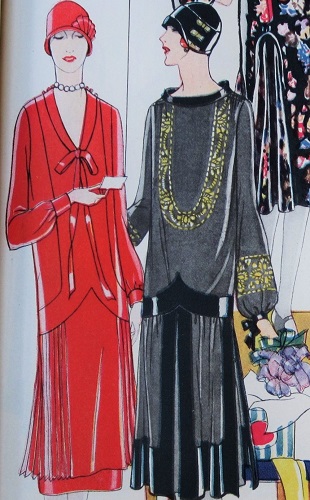 But the plastron front really was a designer fashion; this design is by Agnes Haver (Mme. Agnes). 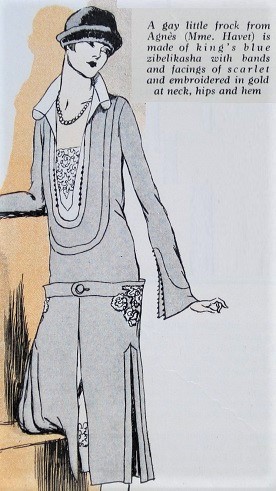 A series of curved lines outlines this gilet and evoke the lines of long necklaces. Couture from the house of Mme. Havet.

Another (similar) mid-Twenties’ style was the suspender skirt, which was worn over a separate blouse.

Butterick called these either dresses or suspender skirts, but the pattern numbers make it clear that the blouse was bought separately.

It’s not always easy to decide which: suspender skirt or bosom front dress. 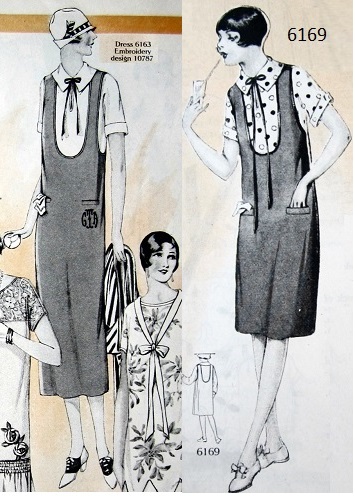 These Butterick patterns from July 1925  look like suspender skirts, but were described as “dresses” without a separate blouse.

They do have a shorter “bib” area.  Some plastrons were rectangular, instead of rounded at the bottom: 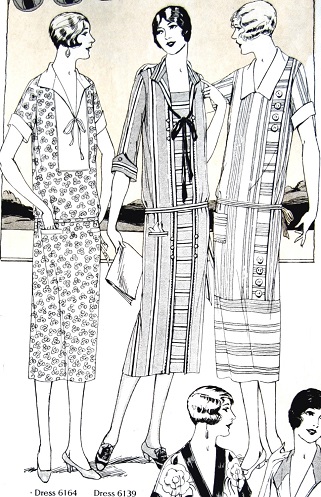 A squarish white plastron brightens a house dress (and distracts from its resemblance to a sack-with-a-hip-belt.) July 1925.

This white gilet has a long button placket adding to its vertical look. May 1926.

Other shapes were possible: 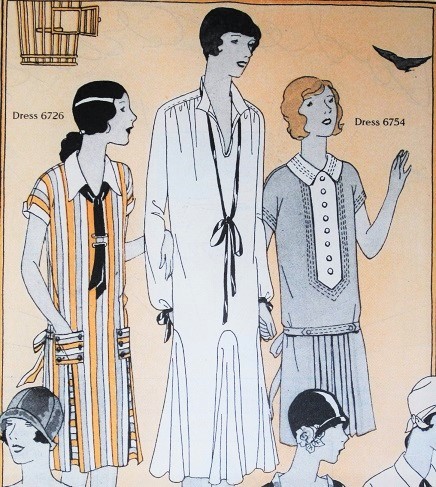 The plastron/bib/gilet at right is pointed at the bottom. April 1926. 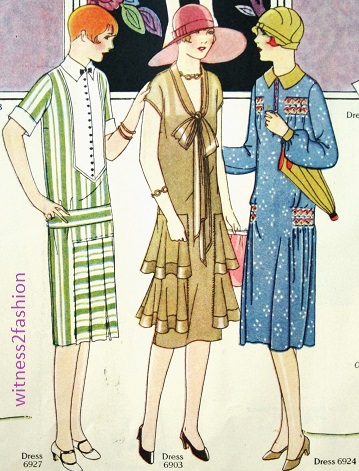 One of the reasons the “bib” look ought to be in our 1920’s fashion vocabulary is its versatility. I like the crisp look of a white plastron, but it could be made in a contrasting color, or in a print fabric, or even in stripes, with the dress and plastron stripes going in different directions. 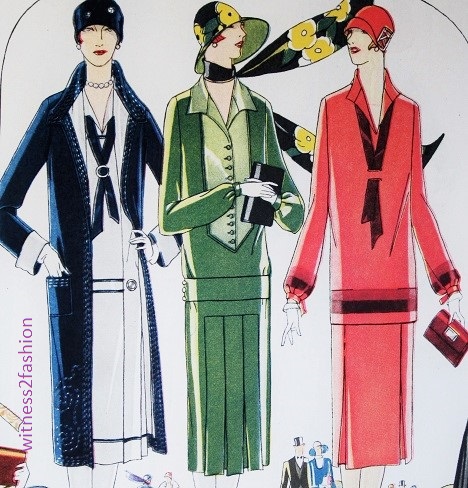 Center, a plastron and collar in a coordinating lighter green color. April 1926. 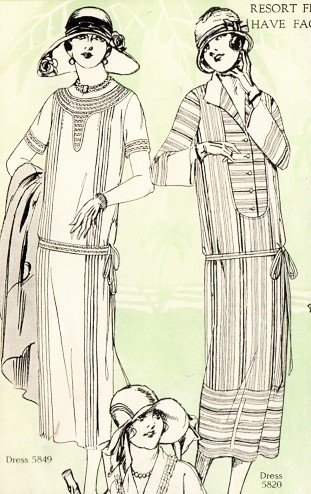 A girl’s bib dress plays with horizontal and vertical stripes. May 1926.

Another use of pleats and stripes on a woman’s bib dress, May 1926. 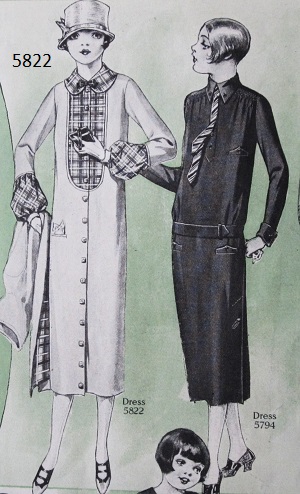 Left, plaid adds interest to the gilet and the sleeves (and the matching coat lining.) 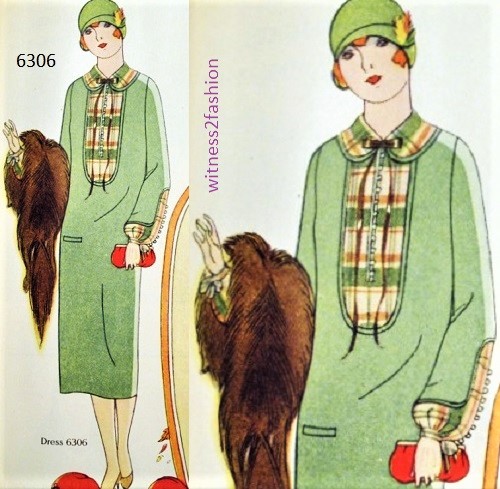 A colorful plastron on a teen style. October 1925. Many buttons on that sleeve! 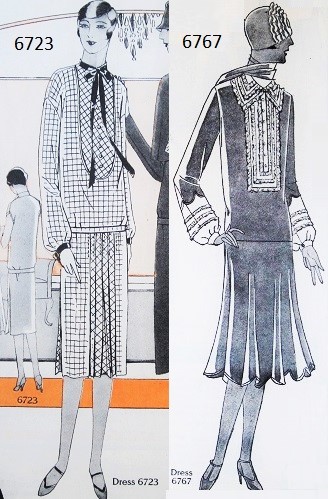 A gilet or bosom front could also be quite sophisticated, with the use of a more luxurious fabric: 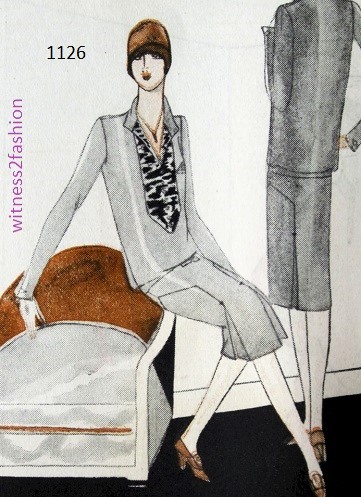 The bib in a dressy incarnation, from Delineator, November 1926. The rear view at right shows an inventive skirt design whose angles echo the gilet/bib shape.

Or you can enjoy/adapt the basic shirt bib or “bosom” version: 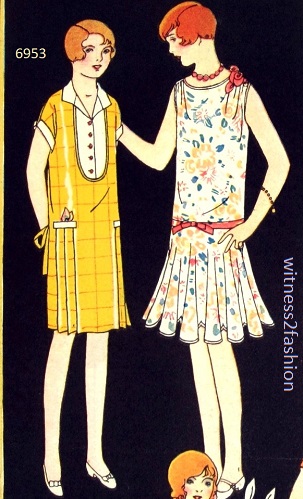 Dresses for girls, August 1926. School and party wear. (Within a year, women would be wearing dresses almost this short!)

3 responses to “Bib or Plastron Fronts on 1920s’ Dresses”