As much as I admire the Art Deco geometry of many 1920’s dresses, I can’t ignore the huge number of softly draped dresses accented with big bows, like this couture dress by Lucien Lelong from 1928.

A day dress from Paris designer Lucien Lelong; sketched for Delineator, August 1928. “Deep blue is very new for fall. It is the color of this crepe satin frock with its drooping skirt and bow-tied bolero.” 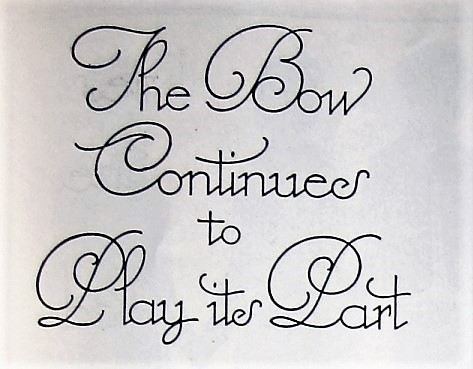 A solitary bow at the shoulder could be used to balance asymmetrical skirt drapery, as in this evening pattern:

Bows could be placed symmetrically in the center of the body or and/or neckline:

When two bows were used, they could balance each other by being offset, one high on the right side and one near the waist on the left, but this was not always the case.

Left, a day dress with a bow centered on the neck and another bow, far to the side, on the hip. Far right, a more formal dress with bows that balance each other, one on the right shoulder and one on the left hip. Butterick 2129 and 2178. August 1928. On No. 2178, the eye is led from the shoulder to the hip diagonally across and down the body, for a dynamic and slenderizing effect.

Sometimes bows were both placed on one side of the body: 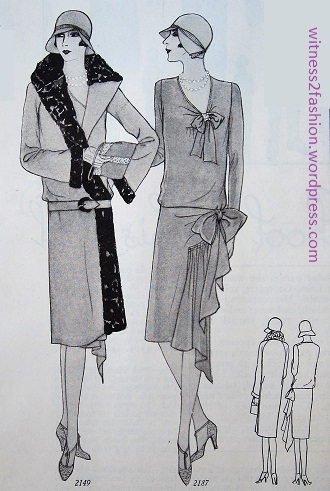 In this dress, all the interest is on the frock’s left side, at the asymmetrical neck and the skirt — not an easy look to do successfully.  Butterick coat 2149 and dress 2187. August 1928. The side panel on the dress hangs below the coat hem; this was acceptable in the twenties.

Butterick afternoon dress 2174 has a bow centered at the neck line and another off to the side hip. Butterick dress 2174 and coat 2151. Delineator, July 1928. (In this case, the illustrator does not show the side panel of the dress hanging out below the hem of the coat, as it does in the previous coat and dress illustration.) 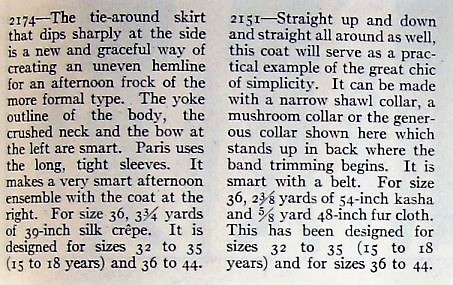 Even schoolgirls had bows on their “good” dresses:

Left, Butterick 2137 — with four bows — shown on a teen-aged girl. Right, a “bolero” outfit, Butterick 2167. August 1928. After idealizing the “boyish” look, now the magazine extols the “new feminine feeling.” The book Uplift says teens were buying brassieres, not flatteners, in the late twenties.

Dress 2137 — with four bows — was not just for teens; the pattern was also available for women sizes 36 to 44 bust. There’s a different illustration of the same dress later in this post. The dress on the right, below (No. 2066) was similarly available for teens or adults.

The dress on the left has a “bridge coat” worn over a sleeveless chiffon evening dress. “Without the coat it is a chic evening frock….” Day dresses were usually not so completely sleeveless that the shoulder bone was visible; evening dresses were sleeveless and had lower-cut armholes than tennis dresses. 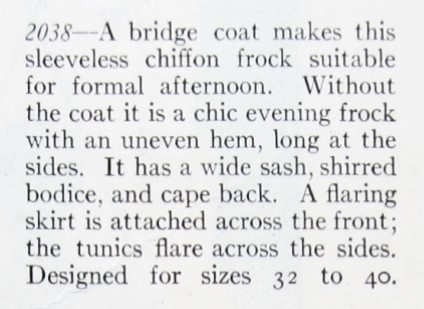 The print dress in the center has “a blouse with crushed waistline, square neck, and bows at hip, neck, and wrists;” for sizes up to 44 inch bust. For the dress at the right with shirred front, a color scheme of red, white and blue was suggested.

Even dresses with a modern geometric quality might be made with an accent bow:

Butterick 2137 and 2127 have a style moderne quality — and big bows. Delineator, July 1928. This illustration of 2137 is much more stylized than its version for a teen, shown earlier. 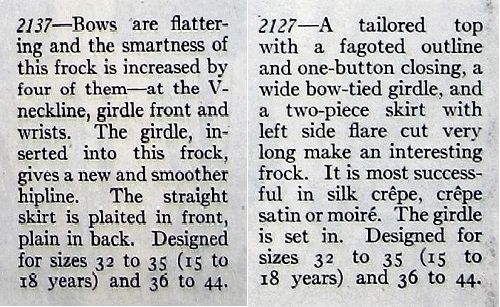 Number 2127 could be made without the bow:

As you might expect, bows reached their full glory in evening wear. The bow could be at the back, suggesting a bustle…

Butterick 2087, an evening dress with enormous back bow, June and July illustrations, 1928. For young or small women.

Like the dresses of the thirties and forties, its bodice has an underarm opening in the left side seam.

… or the bow could be at the side:

Butterick evening dresses 2112 and 2123 have bows at the side hip. July 1928, Delineator. Showing bare shoulders with narrow straps, seen on No. 2112, was a very new fashion. They were called “lingerie straps.”  Chanel showed one in 1926.

Paris designer louiseboulanger (the house of Louise Boulanger) even put one enormouse bow on the front of a dress, an idea which Butterick seems to have copied…. [Butterick’s bow could be on the left side of the front — the illustration is hard to read — but the dress itself is symmetrical, so I would guess the bow’s in the center.]

Left, couture gown by louiseboulanger, sketched for the May issue; right, Butterick pattern 2108. Delineator, May and July 1928.

This complex satin dress was featured in an ad for Kotex:

Draped satin dress from an ad for Kotex sanitary napkins, Delineator, August 1928. The effect of a bow seems to be created by the tucked satin, but it is probably a separate piece of fabric.

I didn’t find a credit for the dress designer. Is the model a living woman or a store mannequin? What a lovely face….

I think she resembles Lee Miller, photographer and model. Mannequins were sometimes based on recognizable people.