These are Foot Saver Shoes from a February 1929 ad in Delineator. Foot Saver Shoes emphasized comfort over high fashion, but these shoes are also chic; the dressy shoe on the bottom has a delicate strap and gracefully curved heel.

Nineteen thirties’ shoes from the same company look “clunky” to me. Their thick heels drop straight from the arch to the ground, and the shoe covers much more of the foot.

These dressy shoes (one of them trimmed with sequins) are also Foot Saver Shoes, from an ad in Woman’s Home Companion, October 1936. To me, they look thick and chunky, with high vamps guaranteed to make a woman’s legs look shorter and thick ankles look thicker.

I see a big difference between the fashionable shoes of 1929 — most of which seem graceful and beautiful to me — and the chunkier, more covered-up shoes of 1936.

Styles from an ad for Dorothy Dodd Shoes, Delineator, March 1929. How delicate they seem.

In March 1929, Delineator ran a fashion article (by Lucile Babcock) on Spring shoes, which featured these six shoes, from different manufacturers. The following quotations come from Babcock’s article. 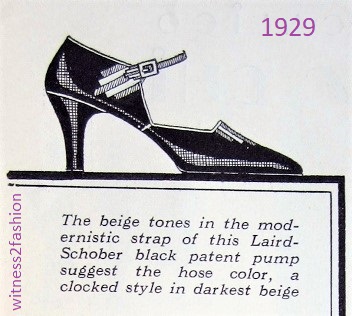 “Patent leather is most successful when combined with lizard or kid in a monotone.” 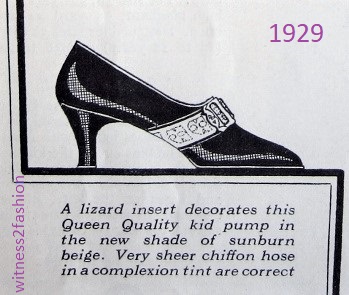 “Water-snake and lizard are carried over for the spring session, and those lovely gray-beige tones which blend so well with frocks of beige, gray, blue or green are witnessed everywhere…. Kid-skin colors hold a brief for the sunburn vogue, and all tones of beige are important.” (Suntanned skin was just becoming chic in the late twenties.)

“The fabric shoe, essentially a sports style, is very definitely on trial for its acceptance by smart women…. In its best aspects, the fabric shoe is the prefect final note of gaiety for the white costume.” 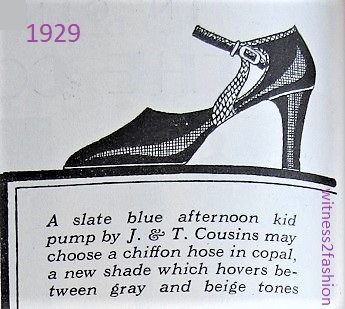 “A new leather called “frosted calf,” with a lustrous surface, is seen in gray (a deeply beautiful gun-metal hue) in beige, brown and black.”

Coordinating stocking colors were recommended for each featured shoe. “So specialized is the hosiery situation with its complexion tints and sunburn hues that the wise woman saves time and effort by selecting her hose wardrobe at the same time that she makes her shoe decisions.” [1929]

Shoes and stockings are coordinated to the clothing in this Arch Preserver shoe ad, June 1929.

Stocking colors in this ad from October 1929 could match your gown, your shoes, or your skin tone.

By 1936, stocking colors were more natural, but still coordinated with shoes and/or clothes.

Foot Preserver shoe ad, March 1929. Delineator. The lace-up shoe on the bottom is similar to the “old lady shoes” of the 1930’s, shoes my grandmother still wore in the 1950’s.

The Foot Saver shoe at the top of the ad has a thick strap, but it’s trimmed with a fancy buckle and has a graceful curve on both sides of the heel. March 1929.

These shoes foreshadow the higher, chunkier shoes of the 1930’s, but the 1929 sport shoe (below at top left) still has thin, graceful trim.

Speaking of sport shoes, this nineteen twenties’ ad for ZIP depilatory shows them worn with socks. 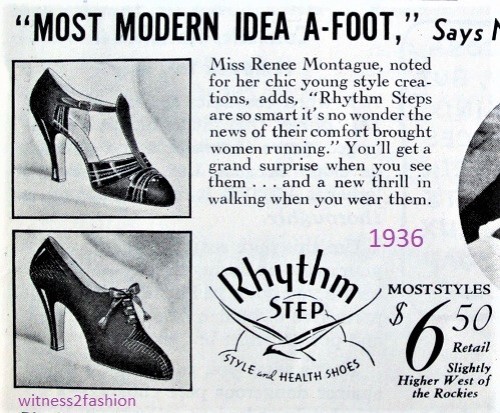 But the lace-up shoe in the same ad was more in line with mainstream fashion by then, with a high heel and high vamp  covering most of the foot.

I love the Twenties’-look shoes used in this 1936 Lux soap ad:

But fashion is a tyrant. Did they look old-fashioned to the eyes of 1936? 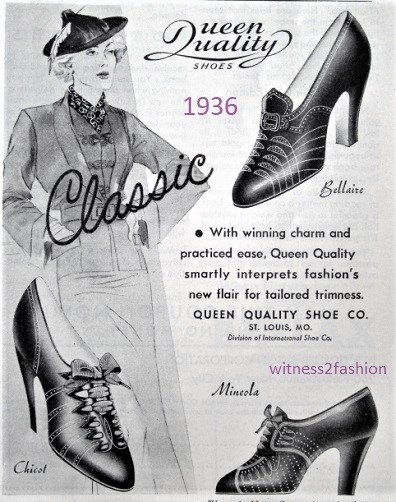 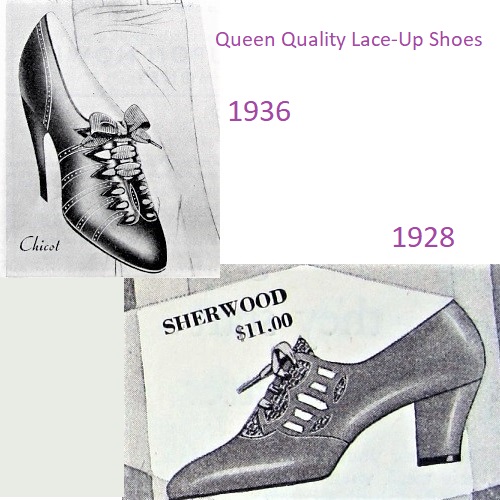 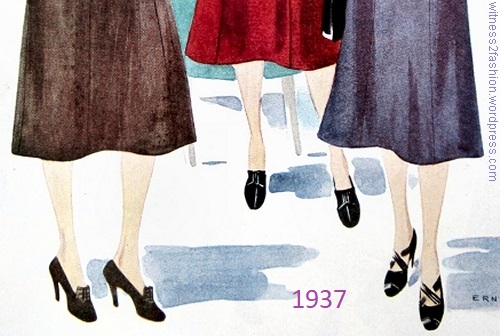 Three generations, 1937. Can you tell which are the young woman’s shoes and which are her grandmother’s? Pattern illustration, WHC. 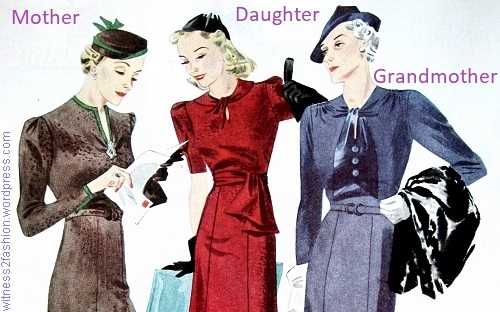 Three generations of fashionable women, 1937. Were you able to match the shoes to their ages?