A Perfect Fit: Clothes, Character and the Promise of America

A Perfect Fit: Clothes, Character and the Promise of America was first published in 2001, but I discovered it at the library this year. This is such a good book that I wish it had a better format. Professor Joselit writes about the way clothing “Americanized” immigrants and helped other Americans — “outriders” by virtue of race or economic status — integrate into the mainstream culture. 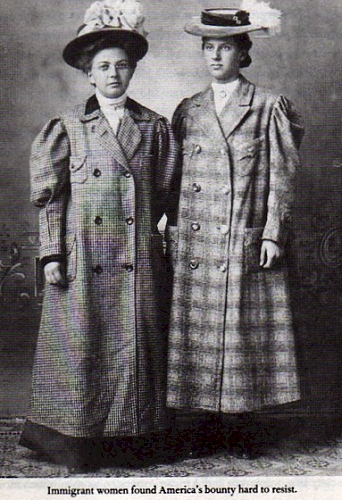 Illustration from A Perfect Fit; from the Peter H. Schweitzer collection. Please do not copy this image.

The chapters can be read as independent essays on topics ranging from “The Mark of a Gentleman” to “The Truth About Fur” (with a necessary side trip into egret feathers and the founding of the Audubon Society) — all researched primarily in periodicals, trade journals, and newspapers. Consequently, there is a lot of information from previously neglected sources. Other chapters discuss changing ideas of modesty (corsets and hemlines), men’s clothing and hats, shoes (“Oh, My Aching Feet”), and other accessories (“Say It with Jewelry.” )

There is much to like about A Perfect Fit — including the extensive use of primary sources that are not on the usual fashion writers’ list:  Hadassah Newsletter, Council Woman, Catholic Citizen, Scientific American, and the records of the Alabama Cooperative Extension Service, among many others.  But it can also be exasperating, chiefly because of problems that should have been addressed by the editor.  Since the preface says,  “the 1890s, when this book begins, and the 1930s, when it ends,” it’s disconcerting to see undated illustrations from earlier and much later decades.  To Joselin’s credit, the illustrations include Americans of African and Jewish ancestry wearing elegant clothing, in keeping with her theme of “The Promise of America.”

Her discussion of “fashion shows produced by rural women and their daughters,” between the wars, with the encouragement of 4-H clubs and the U.S. Department of Agriculture was news to me, and fascinating — in spite of this photo illustration that is clearly from the post-war era.

Illustration from A Perfect Fit. From collection of Hadassah, the Women’s Zionist Organization of America, Inc. Please do not copy this image.

The chapter on fur and feathers is very interesting, and answered a question that had been in my mind: How was it possible that photos of the 1930s — the Great Depression — showed so many ordinary women (like secretaries and typists) wearing furs? The answer illustrates the problem of unintended consequences: to eliminate the cruelty of steel-jawed traps, fur farming was encouraged as a more humane solution. “In 1917, there were only four fur farms in the entire United States; by 1930, there were more than forty-five hundred.” This drove down the price of furs — and millions of animals were raised for slaughter.

“A la Mode,” the chapter that best explains the subtitle “Clothes, Character and the Promise of America,” shows the aspiration to “blend in” and the consequent emphasis on materialism that is still [in my opinion] an American plague. It also discusses the revolution in dress that resulted from improvements in mass-produced clothing.

Illustration from A Perfect Fit. From the Peter H. Schweitzer collection. Please do not copy this image.

There is even a mention of early charity thrift shops and the “I cash clothes!” man who was familiar in many neighborhoods.

Since so many of the sources are periodicals, the lack of a bibliography is perhaps understandable, but the decision to avoid numbered footnotes — or even an asterisk — means the reader has to flip back and forth constantly, trying to track and date the sources. (The footnotes are sorted by page number; until you look for a citation, you don’t know whether there will be one or not. There usually is one — or several — identified by phrases from the text. ) Finding out more about an intriguing statement is not easy. Joselit examines trends, using copious citations but without much regard to strict chronology; it’s possible to find references to articles dating from 1911 and 1925 in the same sentence, e.g., in a sentence on p. 175 about the popularity of  ” ‘interesting insect jewelry’ and strings of pearls.”

[My husband has had several books published, so I’m aware that editing is often up to the writer these days. One publisher even told him to avoid putting dates in the text, because “people don’t like books with lots of numbers.” And some publishers are footnote phobic — but luckily, not Mary Roach’s. Her Packing for Mars would be much less funny without the footnotes at the bottom of the page. I hope other publishers notice that footnotes at the bottom of the page have not discouraged readers from buying her books. ]

I just wish A Perfect Fit had a better format and the quality of editing that it deserves.

The final chapter, “Emphatically Modern,” covers the nineteen forties and the fifties, and ranges to the 1970s ( in spite of the date range set out in the preface.) It covers man-made fibers, zoot suits, women wearing trousers, etc. — and the citations at the back of the book offer some great leads to further research.

A Perfect Fit: Clothes, Character and the Promise of America is crammed with marvellous quotations from usually neglected sources. Joselit is concerned with the everyday clothing of Americans, new and old. And she discusses both men’s and women’s fashions. It’s definitely worth reading — but you’ll need to keep a bookmark in the footnotes section; you’ll probably be flipping back and forth several times per page to check the dates. Available in hardback or paperback. You can read more detailed reviews of this book at Houston Chronicle,  Project MUSE, Kirkus Reviews.

Note — photos from the book have been used only to illustrate points made in the review. They are not to be copied, posted, reproduced, etc. without permission of the copyright owners.