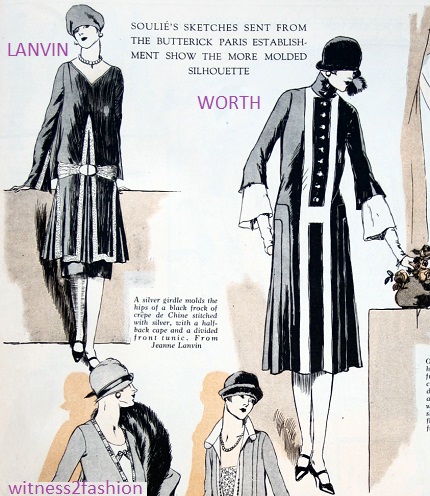 The designer dress by Lanvin has a “silver girdle” molding the hips and its “divided front tunic” is trimmed with silver, perhaps silver stitching. (Custom embroidery is still a mark of couture.)

A closer look at the Lanvin design, which features silver bands on a black dress. Winter, 1925-1926.

Striking, contrasting bands down the center front give impact to this Butterick pattern (right) from January 1926:

Butterick 6543, right, offers a charming solution to “authentic Twenties style” for women who don’t want to exaggerate the width of their hips.

“Crepe satin used with its reverse side” would give a very subtle effect; here, chiffon velvet seems to be suggested, although applying those straight bands to velvet would not be easy sewing. Heavy crepe de Chine would be an easier-to-handle choice.

Right, a good example of the subtle effect of reversible crepe satin; this 1927 dress uses the matte and shiny sides of the same fabric.

The flared sleeves of Butterick 6543 are very like the Lanvin couture design, although the bands ate placed differently. 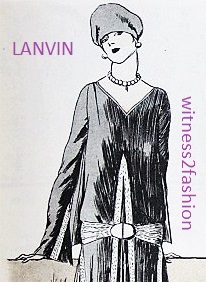 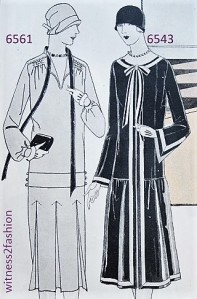 Note the short-sleeved summer version of 6543; the suggested border print fabric would make a dress that looked very different from its dark winter version.

This banded evening dress by Jenny was also illustrated in January 1926 — It’s not for the timid:

A banded evening design by Jenny, a very successful couturier in the 1920’s. For more about those deep armholes, click here.

In “orchid pink crepe satin embroidered with pink pearls and blue flowers worked at hip and shoulder,” it would be modified to suit the woman who ordered it. It was probably available in other color choices — and with a sheer “modesty” insert in the deep V neckline, if required.

For a much less elaborate Butterick dress from 1926 — which used a slimming contrast tie to good effect, see 6553, at right:

The long ties are important to the effect of these dresses, distracting from the horizontal line at the hips, adding the illusion of width to the shoulders and drawing our eyes up, closer to the face.

Butterick 6559 (left) makes good use of a border print.