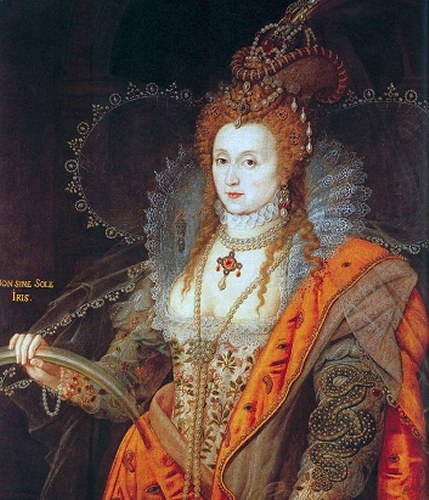 Elizabeth I, detail of the “Rainbow Portrait” in Hatfield House; image via wikimedia commons

Three centuries after the death of Queen Elizabeth I, American women still believed that beautiful skin should be pale.

Advertisement, 1917. “So tanned, so colorless …. However unattractive exposure to the summer sun may have made” your face….

“Fair and tender ladies” with “peaches and cream” complexions — that was the fashion ideal promulgated for thousands of years, and not just in Europe. (Click here for the disturbing “White Skin: A Chinese Obsession.” 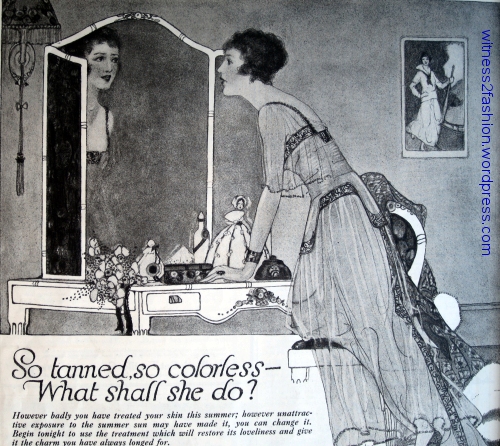 “So tanned, so colorless — What shall she do?” Ad from Ladies’ Home Journal, 1917. Advertisement for Woodbury soap.

Then came the nineteen twenties…. When chic American and European women wanted to be sun-tanned. 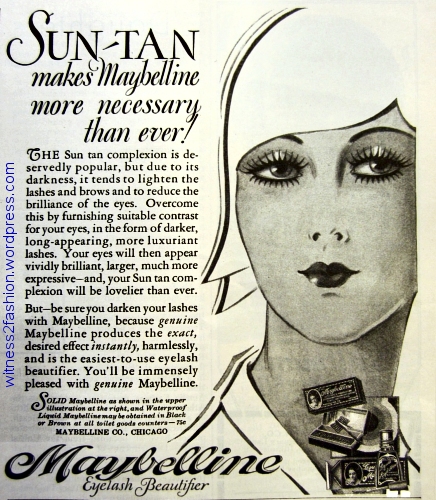 One of the many bizarre ideals of beauty — one that has given pain to as many women as the fashions for impossibly thin bodies or bound feet — is the crazy idea that beauty requires a light or pale skin tone. The Ancient Egyptians and Etruscans often portrayed women in a lighter shade of paint than men. “The feminine ideal during the Han period (2000 years ago) for women of the court was almost unearthly white, white skin. Moon-like roundish faces, long black hair,” writes Ann Rose Kitagawa.  Cosmetics that were supposed to lighten your skin have been around for thousands of years. For women of color, there are plenty of depressing  vintage ads for preparations that are supposed to lighten or bleach your skin. (And plenty of modern ones, too….)

“The Greeks favored light complexions, which they maintained using white lead. This was later replaced by chalk powder (around 1000 BCE) due to the many deaths caused by slow lead poisoning.” [White lead, which was also used in cosmetics by the Elizabethans, is a form of arsenic.]— read more at annmariegianni.com.

At a time when almost all people worked out of doors (that is, for most of human history,) tanned skin was the mark of a peasant, and lighter skin the mark of higher social status: the educated, the administrators, and the aristocrats. This idea was turned upside down between the 1920’s and the 1930’s, when more people worked indoors, and only wealthy people could afford to vacation at beach resorts during the winter months. Suddenly, a winter tan became a status symbol for Americans and Europeans, influencing dress, as explained in this 1929 magazine article: 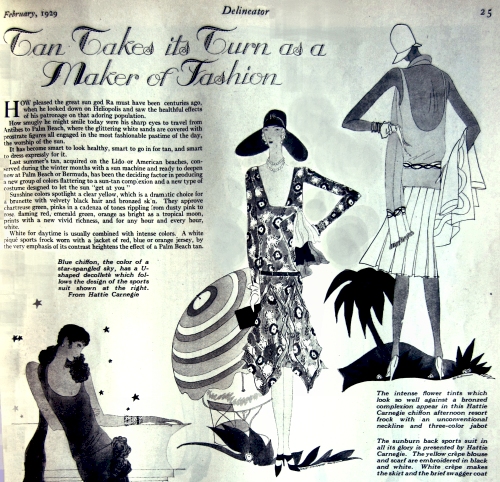 This article even mentions artificial tanning: “Last summer’s tan, acquired on the Lido or American Beaches, conserved during the winter months with a sun machine and ready to deepen now at Palm Beach or Bermuda…,” could be maintained with a tanning lamp like this one. 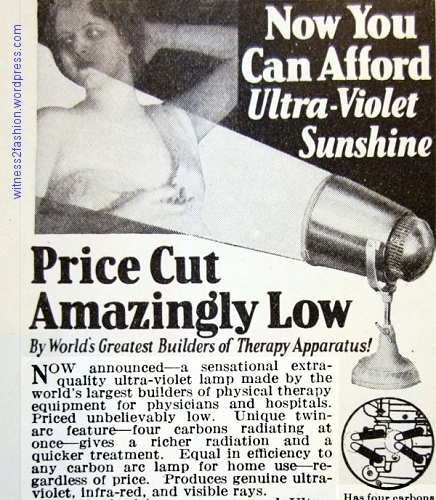 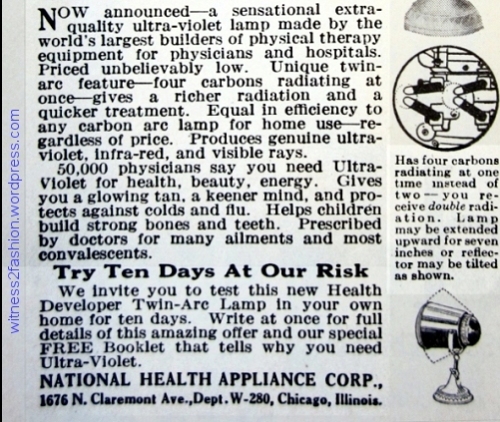 To be fair, the “health” claims were related to the relatively recent discovery of Vitamin D, its part in calcium absorption, and the need for sunshine to prevent the bone-deforming disease, rickets, in children. But the sunlamp was undoubtedly as much a fashion item as a health item in 1929.

It’s not surprising that women were confused in the late twenties and early thirties — To tan, or not to tan? [Personal note:  I am very pale, as California girls go, but my mother, who prized her extremely white skin, was terribly disappointed that her little girl was not as fair-skinned as she was. Apparently, some women who lived through this “tan/not tan” era were never enthusiastic about the new fashion.] 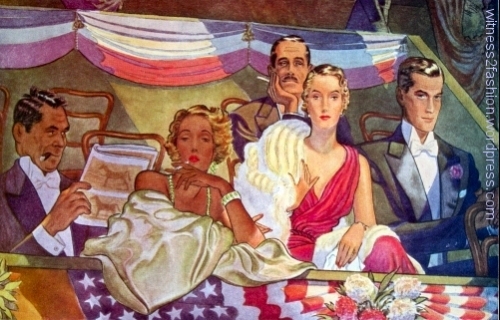 Even in the thirties, not every fair-skinned woman chose to get a tan. Two blondes in a story illustration from Woman’s Home Companion, Jan. 1936.

I was amused to find these two ads facing each other in the pages of Delineator in 1924, before tanning became chic. 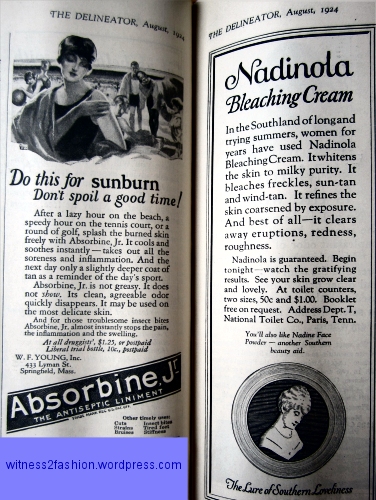 Left, an ad suggesting a remedy for sunburn; right, an ad for a skin bleaching cream.   Delineator, Aug. 1924.

Absorbine, Jr. promised that “the next day,” users would have “only a slightly deeper coat of tan as a reminder of the day’s sport.”  In 1924, getting a tan was an accident that called for a remedy like Nadinola Bleaching Cream, which promised “The Lure of Southern Loveliness.” [Hmmmm.]

In 1928, the unlucky girl who accidentally got a tan could buy Gouraud’s Oriental Cream to cover it up: 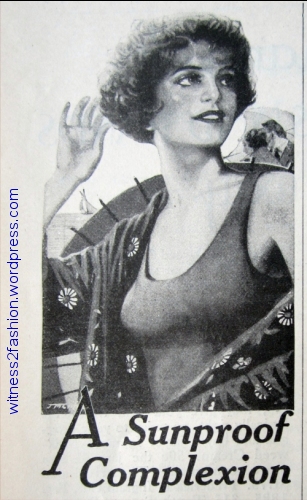 “A Sunproof Complexion” — or the illusion of one — could be applied with a bottle of Oriental Cream, which “renders an entrancing film of pearly beauty….”  Ad, July 1928. 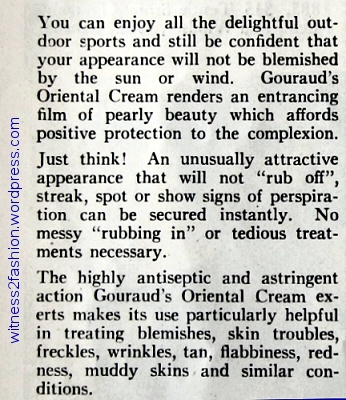 Text of ad for Gouraud’s Oriental Cream, a face and body makeup which covered up a tan, and theoretically prevented one. “You appearance will not be blemished by the sun or wind.” Delineator, July 1928. 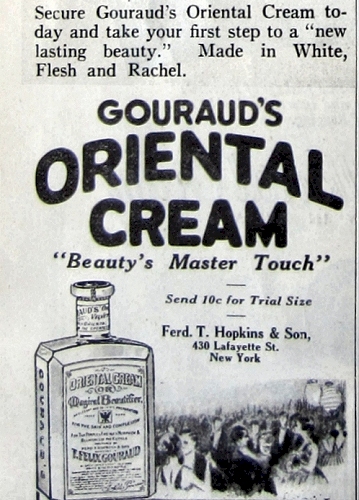 Bottom of ad for Gouraud’s Oriental Cream, which seems to be a liquid body makeup. July 1928. Delineator.

Apparently a liquid body makeup, Oriental Cream was available in “White, Flesh and Rachel.” “Rachel” was a dark-ish makeup color for olive or tanned complexions. Here is a “don’t fear the beach, use Apex Bleach” ad aimed at women of color in the 1920’s.

[I can’t read “Flesh” color without thinking about comedian and civil rights leader Dick Gregory‘s sixties’ joke (I’m paraphrasing from memory) that he really thought we were making progress towards racial equality — until he “tried to buy a flesh colored bandaid.” Dick Gregory opened some windows in my little, white world. And guess what? — that joke is still valid.]

However, by 1929 suntanned faces and bodies were in style, according to fashion magazines: 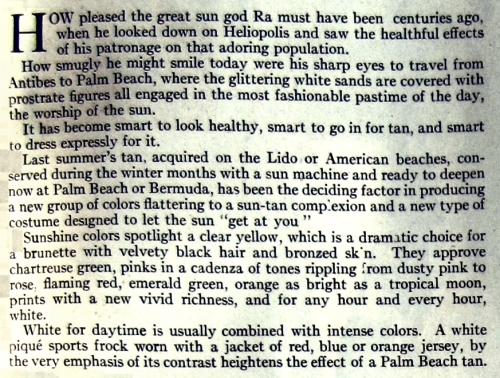 Beginning of article about fashions and colors to flatter a suntan in Delineator, February, 1929.

Notice the references to American and European resorts: Palm Beach, Antibes, the Lido (Venice), Bermuda…. French resorts like Deauville and Biarritz– where Chanel started her rise to eminence — were part of the phenomenon. “It has become smart to look healthy, smart to go in for tan, and smart to dress expressly for it.” 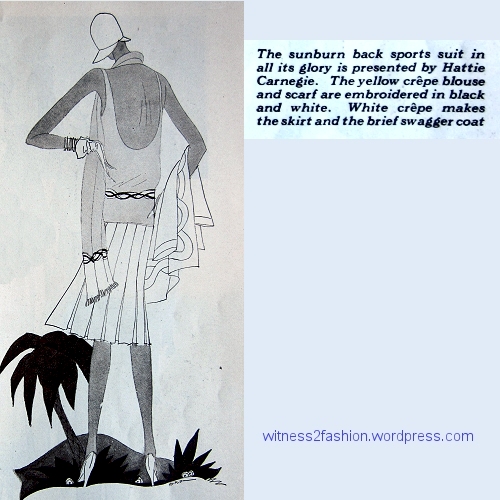 A sports suit with “sunburn back” used white with vivid colors to compliment the tan. Delineator, Feb. 1929. Her back is bare, but wrinkled by the model’s pose. 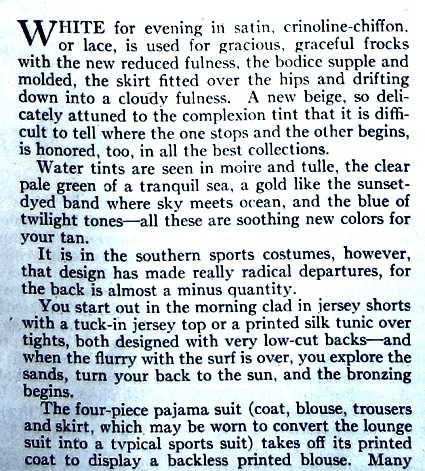 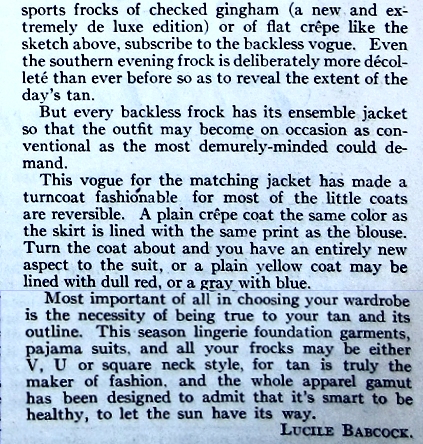 “Even the southern evening frock is deliberately more decollete than ever so as to reveal the extent of the day’s tan.”

“The necessity of being true to your tan and its outline,” e.g., U shaped, V shaped  or square-shaped, is important, since your bathing suit line would dictate the other clothes you could wear to show off your tan. “Tan is truly the maker of fashion.” 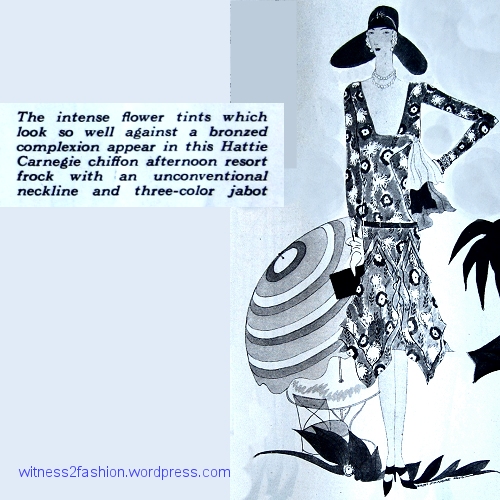 A deep neckline in front and intense flower prints to go with a tan. Feb, 1929, Delineator.

Low-cut evening gowns also exposed your tan, front and back. 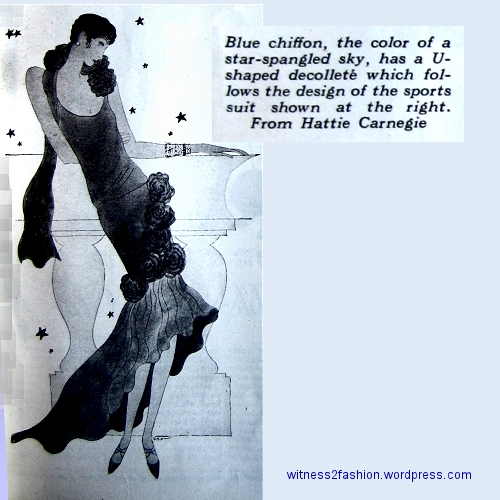 Evening gown in blue chiffon, Delineator, Feb. 1929. It “Follows the design of the sports suit” with the very deep “sunburn” back.

That’s not to say that women were not conflicted by contradictory advertising. 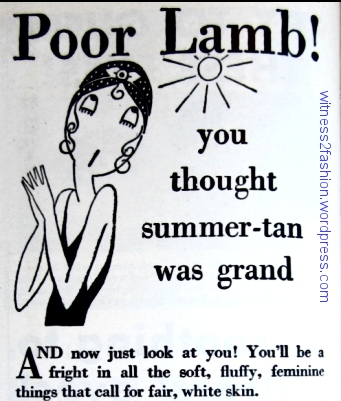 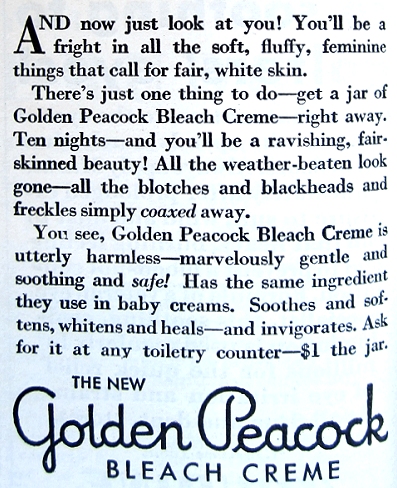 Note that these skin bleach ads from Delineator magazine were primarily aimed at women with Caucasian/European ancestry. Many other products that claimed to bleach or lighten skin were advertised to women with naturally dark complexions.

B. Vikki Vintage has written a well-illustrated review of  Style & Status: Selling Beauty to African-American Women, 1920-1975 by Susannah Walker. Visit her blog here. 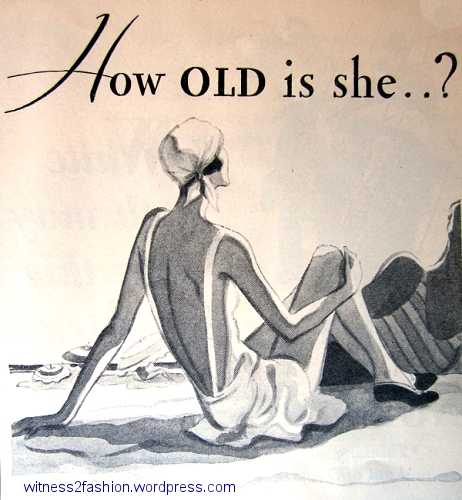 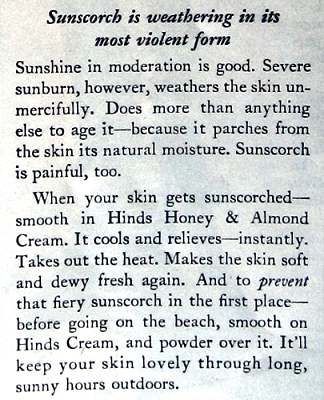 “Sunshine in moderation is good. Severe sunburn, however, weathers the skin unmercifully. Does more than anything else to age it.” Ad for Hinds Cream.

“To prevent that fiery sunscorch in the first place, — before going on the beach, smooth on Hinds Cream, and powder over it.”

“Powder over it?” In 1931, Dorothy Gray offered a product that claimed to prevent sunburn by “absorbing ultra-violet rays.” (It probably did work better than powder over moisturizer): 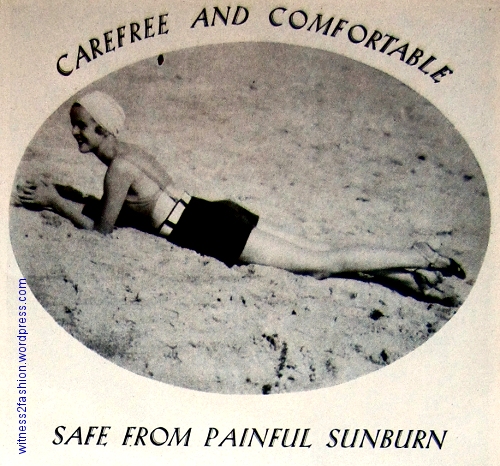 Ad for Dorothy Gray sunscreen. July 1931. Note the peculiar suntan lines that will be caused by this swimsuit, which the model has obviously not worn before. Judging by her legs and midriff, she tanned her arms and upper back while wearing a dress. 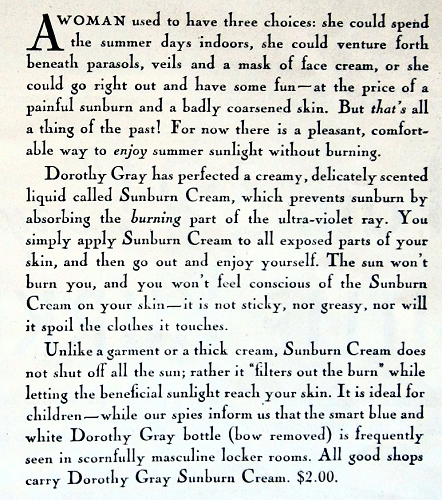 The fashion for tanning was not necessarily long, or universal, and like all fads … It faded. 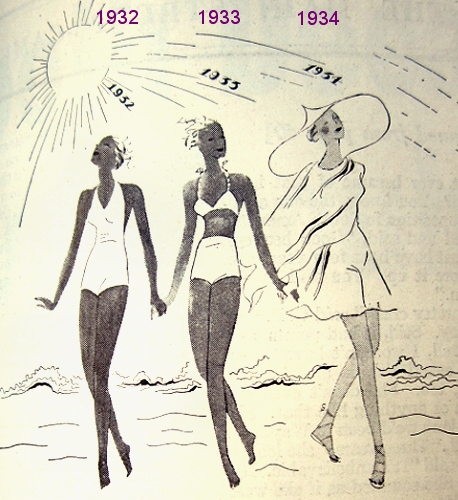 “News” seems to suggest that very deep tans were losing their cachet by 1934. But this cartoon from 1936 contradicts it — at least for an English humorist: 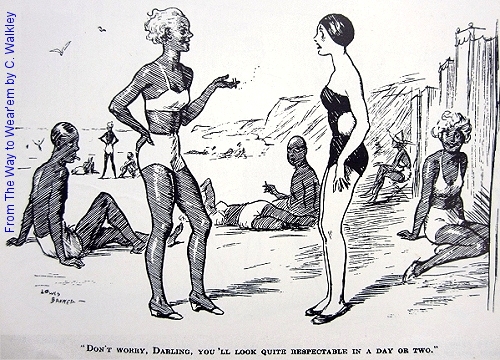 “Don’t worry, darling. You’ll look quite respectable in a day or two.” Punch magazine cartoon from 1936, in The Way to Wear’em, by Christina Walkley.

I’m afraid, from the dismay on the dark-suited girl’s face, that the cartoonist did not agree that a dark tan was “respectable.” The old “peasants versus aristocrats” stereotype had not died.

Sadly, millions of women in third-world countries are still using skin bleach products that contain mercury and other toxic ingredients in the quest for lighter skin. Click here to read The Global Phenomenon of Skin Bleaching: A Crisis in Public Health.