This vintage blouse uses hand smocking to control fullness at the shoulders, waist, and sleeves. Probably before 1920’s.

It’s very similar to this pattern from McCall: 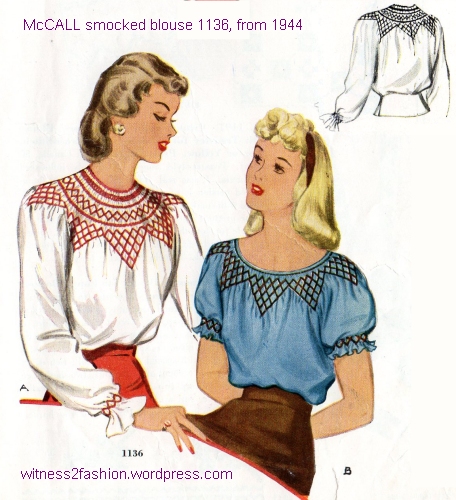 But those forties’ blouses have a peasant influence; they are based on smocked ethnic clothing.

An ethnic peasant blouse with hand-smocked neckline and wrists.

An ethnic flavor was also very popular in the nineteen twenties. 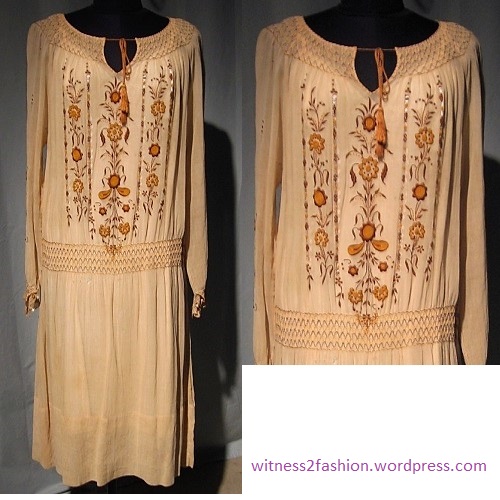 This earlier blouse, however, bares little resemblance to “peasant” styles.

Vintage smocked blouse made of sheer fabric with woven stripes.

The collar covers much of the smocking across the shoulders. So-called “Armistice” blouses are usually short-wasted in back.

I flipped the collar up to show the hand smocking on the back of this blouse. It seems a shame to hide all that work!

I had forgotten about this vintage blouse — it is probably from the “teens.” It uses the stripes woven into the fabric as the grid for smocking, and uses smocking instead of machine-stitched tucks to control the fullness at shoulders, sleeves, and waist. 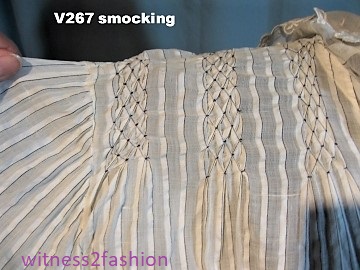 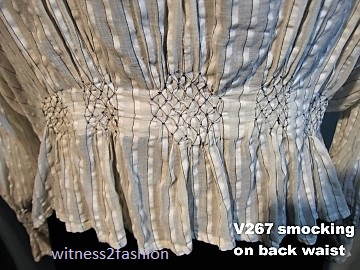 The back waist is elegant, although the blouse would look better after ironing. (But smocking makes ironing more difficult.)

The sleeves have a smocked area near the wrist, creating a modest frill.

Smocking in the wrist area. There is a narrow dark stripe in the fabric next to each tightly woven white stripe.

I believe this is called honeycomb smocking: 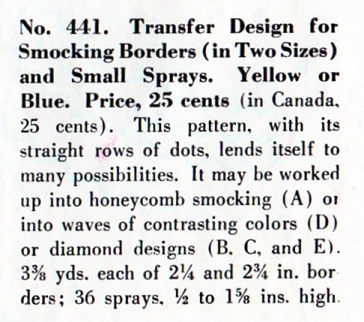 Using striped fabric as a base for smocking produces interesting effects; this image from A-Z of Smocking, by Sue Gardner, shows how the stripes become part of the grid:

Striped fabric can be smocked in ways the either preserve the stripe, as here, or turn them into a “solid” color. Both effects are pictured in the book A-Z of Smocking, reviewed below. Image reproduced for purpose of review example only. Do NOT copy.

I found another — to me, unexpected — use of smocking on a black silk apron from an era when most older women were almost perpetually in mourning. 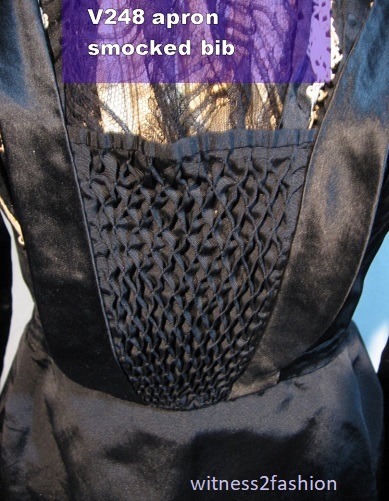 A black silk apron with a smocked bib. It’s shown over an unrelated turn-of-the-century blouse.

Perhaps this apron was worn for nothing more taxing than a little hand sewing — or pouring tea.

About the A-Z of Smocking, by Sue Gardner:

I was fascinated by the many smocking patterns I found in 1940’s McCall catalogs, so I wanted to learn more about this old technique for fabric modification. If you want to find beautifully illustrated, step-by-step smocking instructions, this book couldn’t be clearer. If you are a beginner with an interest in the history of smocking, this may not be quite what you are looking for. 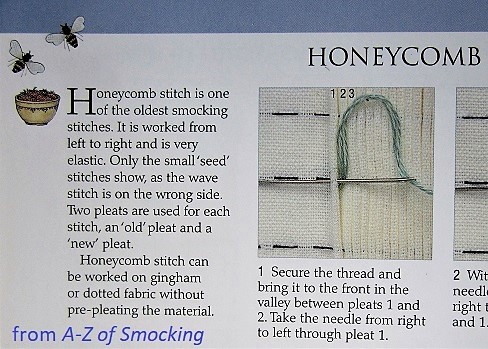 The text can be this brief because the illustrations are so informative and well organized.  Photo from A-Z of Smocking for purpose of review. Do Not Copy.

There is a whole series of A-Z books from Search Press. It’s my fault that I assumed “A-Z” meant “from beginning to end;” instead, it means that the book is organized in alphabetical order, so a lavishly illustrated section on “Honeycomb” smocking comes before an equally fine section on “Trellis” smocking. And an advanced technique, like smocking with Beads, appears before the basic stitches, because it begins with “B.”

On the other hand, because the book is illustrated with step-by-step photos instead of line drawings, it couldn’t be clearer:

A typical section from A-Z of Smocking will have at least two pages of careful and very clear instructional photos like this for every technique covered. Do Not Copy Image.

It even explained (and illustrated the steps to using) a machine that gathers the fabric for you. But the topics I was looking for — about the history of smocking, why it was used for work clothes, which stitches were stretchable and used for the wrist area, for example, were hard to find.

This is the entire passage about Traditional Smocking. No illustrations. A-Z of Smocking is not a history book. Do Not Copy This Image.

Some of the oldest smocking techniques — sometimes called English smocking from its use on shepherd’s smocks — depend on first gathering the fabric with several rows of identically spaced stitches, and then stabilizing them with the decorative smocking stitches. When I read that, in combination with seeing the many stitching examples, I realized that a smocking grid looks a lot like the grid used for cartridge pleating, which had been used to gather fabric in garments for centuries. 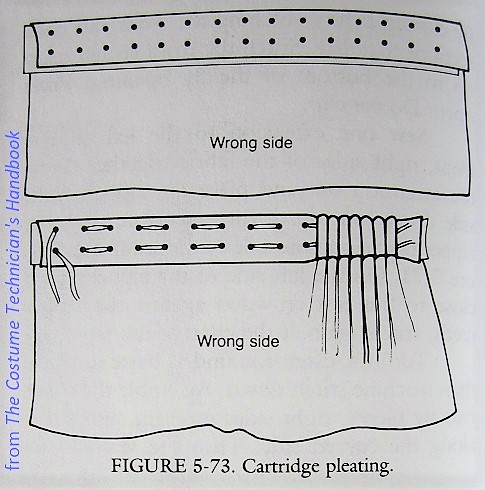 Illustration from the section on cartridge pleating in The Costume Technician’s Handbook, by Rosemary Ingham and Liz Covey. Do Not Copy Image.

If you’ve examined mid-nineteenth century dresses, or made Renaissance costumes, this technique for gathering fabrics evenly and stitching them to armholes, yokes, or waists will be very familiar. 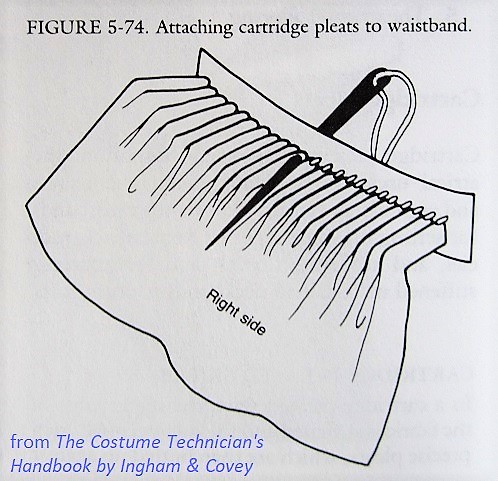 Attaching cartridge pleated fabric — e.g., a skirt — to a waistband. From The Costume Technician’s Handbook. Do Not Copy Image. 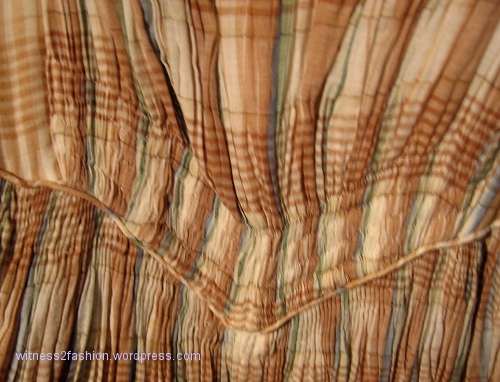 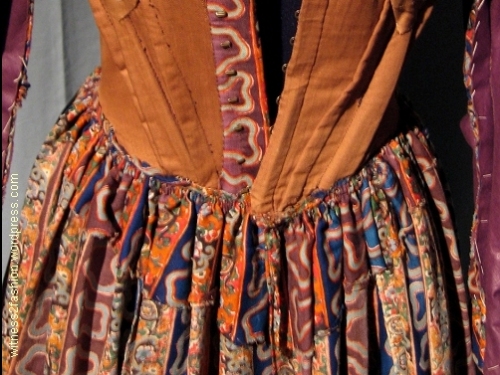 Typical cartridge pleated skirt, stitched to bodice binding. Inside of dress showing extra fabric at CF. You can also see that the front opening is boned.

For me, this links two very useful books: The Costume Technician’s Handbook, which I cannot recommend frequently enough (the techniques are not limited to costumes,) and the A-Z of Smocking, which I would eagerly buy if I had a practical (rather than academic) interest in smocking.

This color page of dresses (and blouses and skirts) from Delineator magazine shows a change in silhouette, from full to narrower skirts. (Tubular Twenties ahead!) Here are designs by Gabrielle Chanel, dated 1916 [from Doris Langley Moore’s Fashion through Fashion Plates via Quentin Bell] :

And here is a Delineator sketch of an influential Chanel suit from January 1925 — very a different silhouette.

(You can read about the “Tubular Twenties” here.)

I’ll show the July 1918 images in greater detail below, but first, a few words about underwear and the “ideal” figure. 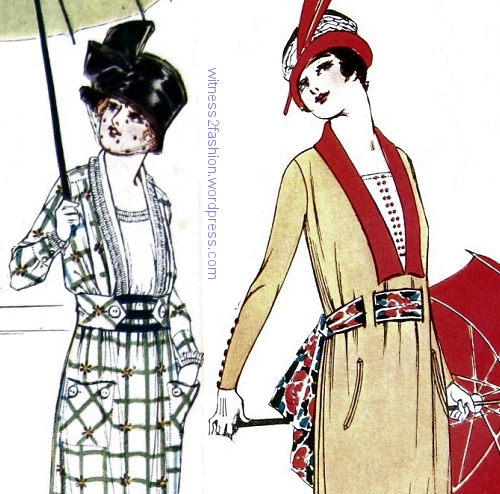 Ideal fashion figures in July 1918 were thick in the waist, droopy in the bust — even with the model’s shoulders thrust back — and slightly swaybacked.

I’m always unnerved by the emphasis on thick waists and low busts of this period. (How is is possible for a slender young woman to have such a low bust? — The explanation is two-fold: the exaggerations of fashion illustrators, and 1917-1918 corsets and brassieres.)

The brassiere of the World War I era was more likely to smash the breasts than to lift them. The corset of the “teens” did not reach (or support) the breasts at all. It extended down over the thighs and pushed the body very flat in front, causing a posture which made the waist higher in the back and lower in the front, as you can see from these 1917 skirt illustrations. 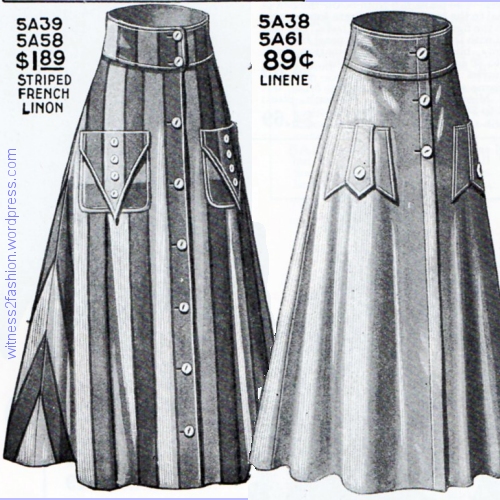 Women’s skirts, Perry Dame catalog, 1917. The waistlines dip low in front and rise high in back.

Skirts, blouses and dresses, from July 1918 show the oddly high waist in back.

The beautiful vintage blouses of this period (sometimes called “Armistice blouses”) are often so short in back that they have to have a tail of fabric added before they can be worn without the corset. Otherwise, they won’t stay tucked in.

This vintage “Armistice blouse” is shorter in back than in front, even allowing for its position on the hanger. It has not been altered; the ties are original.

The page of color fashions (p. 52)  had a half-page of black and white ones, along with all their descriptions, on page 53.

I’m afraid the colors are overexposed in my photos, but still worth looking at. For those who want details, I’ll show each outfit with its original pattern description at the bottom of this post.

Butterick 9992 and 9447, July 1918. Delineator. Belts that crossed over and buttoned in front were a distinctive feature of the “teens.” 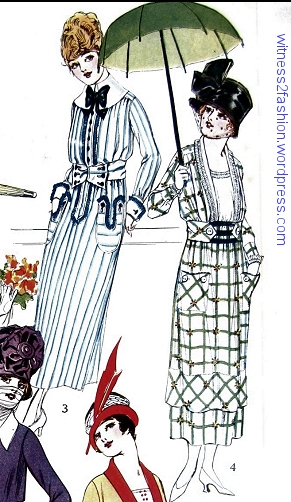 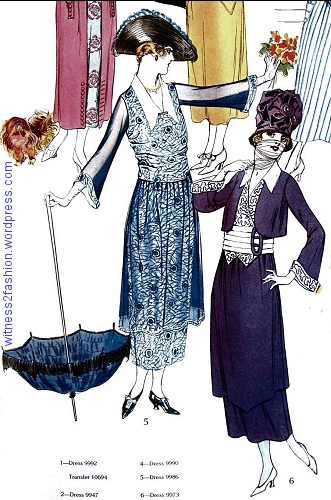 Butterick 9986 and 9973, July 1918. Delineator. There was nothing but fashion to prevent a shapely girl from wearing her belt (or her basque bodice) tighter….

In case anyone is inspired to recreate these fashions, here are the original descriptions and alternate views.

The high collared blouse fell out of fashion around 1912, when bare necks became acceptable, (cf Lucy Barton, Historic Costume for the Stage) but the V-neck in daytime was a new idea in 1914, so most of these patterns show a high-necked alternative for conservative women. 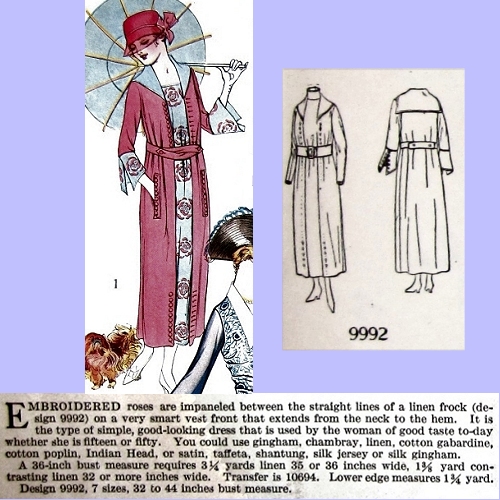 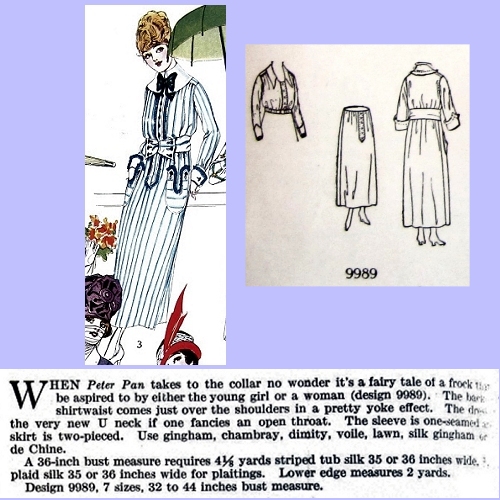 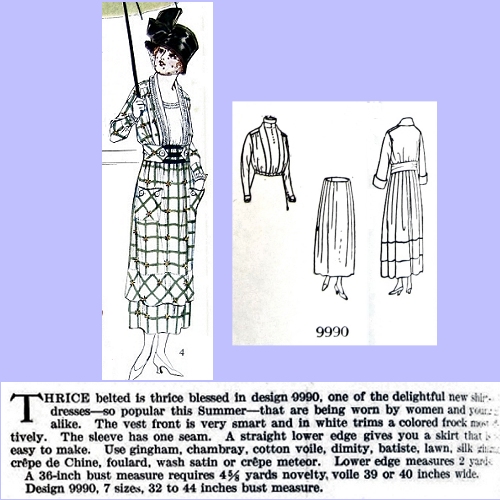 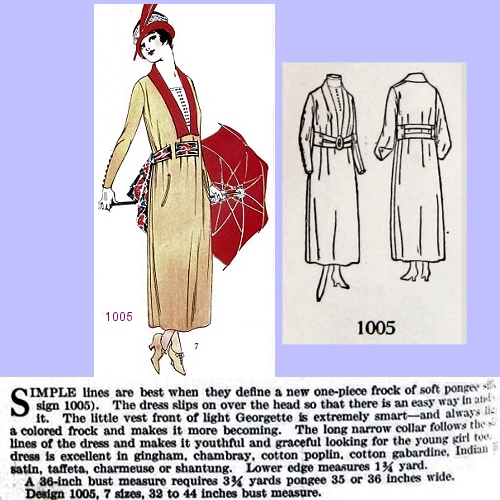 Butterick 1037, July 1918. Delineator, p. 52. The front panel could be asymmetrical. I’m surprised this dress is not shown without its tabard-like top layer.

Recently Lynn at American Age Fashion posted photos of some older women wearing sheer day dresses in the 1930‘s and the 1940‘s. 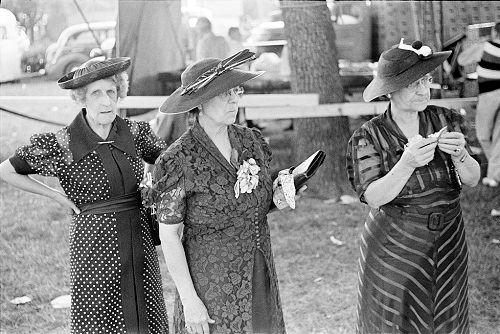 Like Jennifer (from Holliepoint) in Lynn’s comments section, I was surprised that older women would wear sheer dresses that showed their slips. In the fifties and sixties, just having a slip strap drop off my shoulder and become visible was a mortifying experience for me.  “Intimate apparel” was not supposed to be seen except in intimate situations.

However, I was forgetting that many fashions of the 1900’s and 1910’s were sheer, and that women who had been twenty or thirty at the turn of the century would not think of summer dresses that revealed your lingerie as shockingly new. Au contraire.

Ladies’ blouse/waists, Delineator, July 1917. Most of these are sheer; you can see through the sleeves, and probably through the bodices, in real life.

Early in the century, there was even a long-running fashion for “lingerie dresses” like these; they are made of sheer “handkerchief linen,” or cotton batiste, or lawn and ornamented with inset lace, like the underwear (lingerie) of their day.

Lingerie dresses. Left, early 1900’s; right, 1910’s or early twenties. These were photographed over a black slip to show the lace to advantage. A white slip would have been very visible through these dresses. 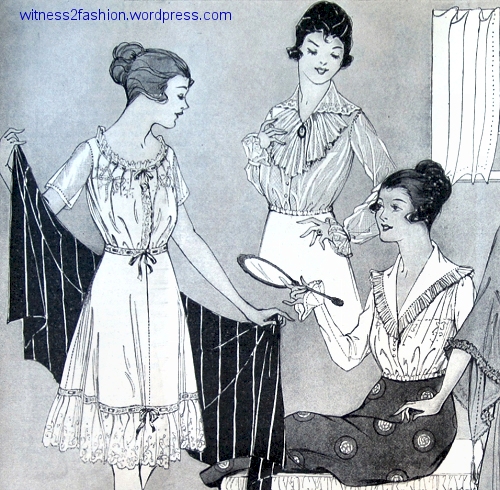 Thin cotton fabrics and lace inserts were used to make undergarments and also to make blouses. Butterick patterns from Delineator, 1917. The blouse/waist at right is sheer enough to show the model’s embroidered underwear, or a lace underbodice.

This beautiful — and very sheer — blouse was made of two layers of netting: 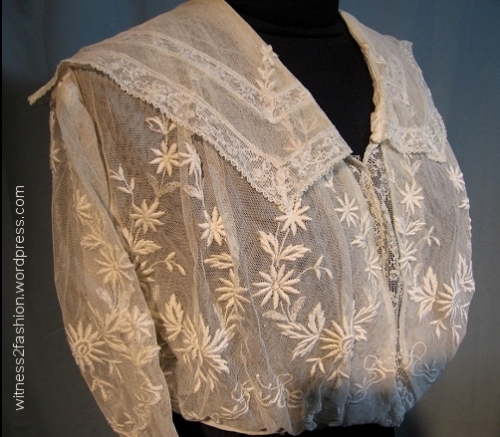 A blouse/waist so sheer that it is made of two layers of netting. Private collection.

Here is its equally beautiful back:

Sheer blouses like the one below are now called “Armistice Blouses,” but it probably dates earlier than 1918, when the Armistice ending World War I was proclaimed.

A sheer vintage blouse, circa WW I, sometimes called an “Armistice Blouse.”

In this photo, you can easily see the coat hanger through the blouse. Underwear would have been equally visible.

Skin and underwear would have been visible through this sheer cotton vintage blouse. Private collection.

During the 1910’s, a skirt and matching bodice (called a waist) were often worn instead of a dress. The patterns were sold separately. These surviving waists show that  they were part of see-through fashions:

It makes sense to me that women who wore these sheer clothes in their prime . . .

. . . would be perfectly comfortable in sheer dresses in their middle and old age: 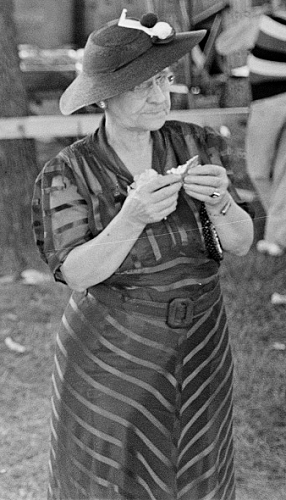 No wonder they took to the sheer fashions of the late 1930’s: 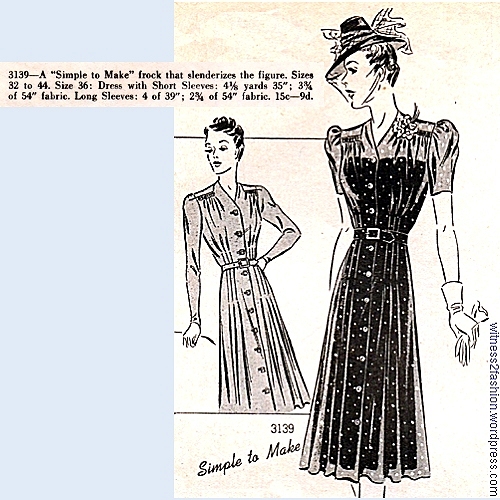 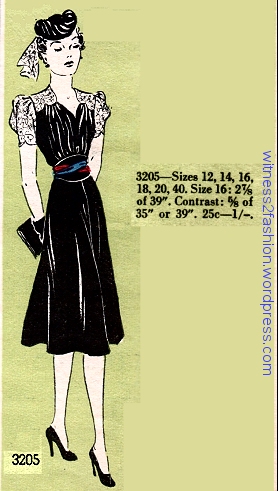 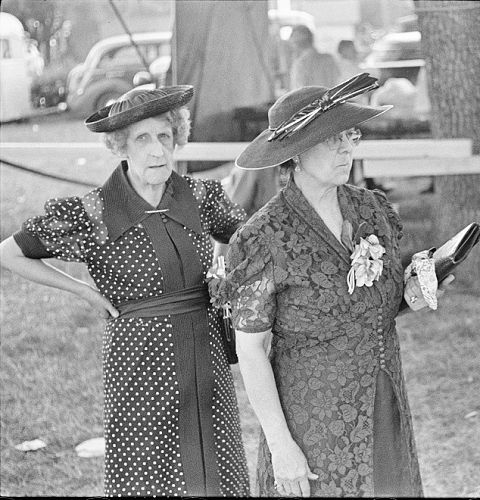 Fourth of July, 1938, Ashville, Ohio. Photo by Ben Shahn from Library of Congress. Detail. A sheer dress with polka dots and a lace dress.

The lace dress has a curving under-bust seam like this one: 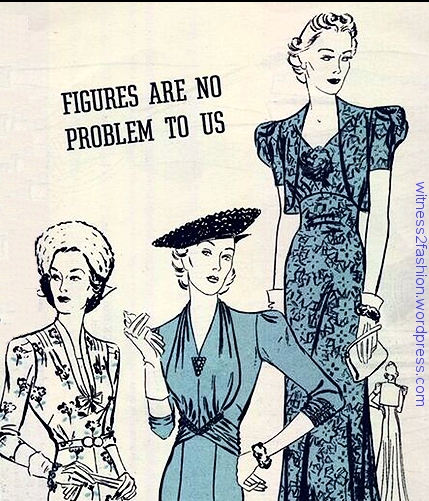 “Figures are no problem to us.” A lace evening dress with bolero jacket, Butterick Fashion News flyer, August 1938. 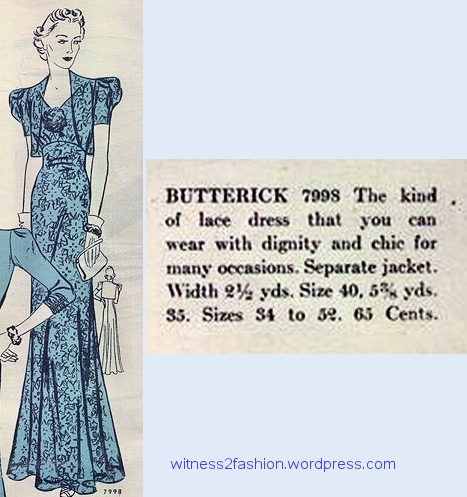 For more about these and other sheer nineteen thirties dresses, click here.

Thanks again to Lynn at American Age Fashion for writing about photos of older women in sheer dresses!