This is one of those surprises that makes reading old magazines so much fun.

“Here is a costume that provides its own underclothing…. The two-in-one blouse slips on over the head and extends into panties.” [It would have had a button crotch, like other combination underwear, called “teddies,”  “step-ins,” or “an envelope chemise.”]

I remember wearing a bodysuit — that is, a blouse that stayed tucked in because, below the waist, it became a snap-crotched panty. As the “bodysuit” it was popularized by Donna Karan, and other manufacturers followed suit. 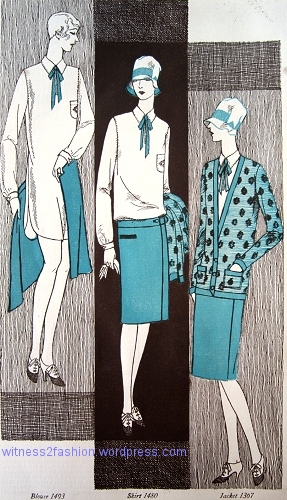 When writing about a 1929 blouse/underwear combination attributed to Madeleine Vionnet, I said, “The problem of wearing a 1920’s wrap skirt which rides far below the natural waistline (the skirt over a satin blouse would have a tendency to migrate around the body as you walk), and the problem of keeping the blouse tucked in when you sit and stand, or raise your arms, are both neatly solved by the “culotte blouse,” as it was called in 1929.

Delineator’s sketch of a suit by Vionnet, and the Butterick copy, pattern 2526. Delineator, March 1929. This “culotte” blouse was also a “step-in” panty.

At the time, I was interested in the fact that a couture design using a very visible zipper and attributed to Vionnet in 1929 pre-dated Schiaparelli’s use of zippers by several years. [To read that post, click here.]

However, I was surprised to see this blouse and panties combination (Butterick  1493) even earlier, in June of 1927, when it was called the “Two-in-One Blouse.”

“The two-in-one blouse is more than a blouse — it is a combination tailored shirt and panties…. It is splendid for sports and for riding since it can’t pull up. ” A “printed silk cardigan” — “the most important sport jacket of the year” — sounds pretty nifty, too.

Butterick cardigan 1367 could be made of wool, velveteen, jersey, or printed silk. The skirt fabric was used for binding on the jacket, creating a suit look.