Do they look a little unfinished? Like something is missing? Do you have an urge to add a long necklace — or something — to these dresses? Here are the original illustrations: 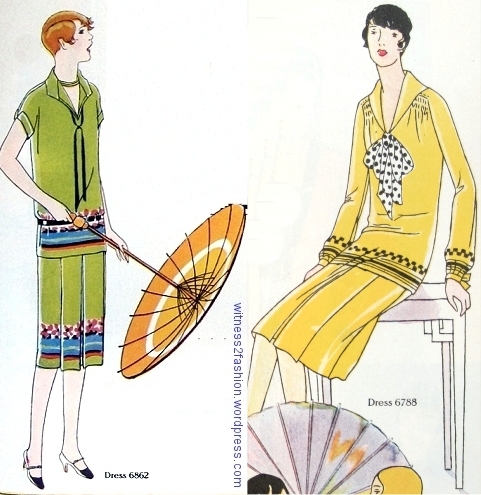 Two-piece border-print dresses as they were meant to look. Illustration from Delineator, May 1926.

Writing about the ways that 1920’s designers tried to add vertical lines to their designs (click here and scroll down) made me realize how much may have been lost from vintage clothing that appears to be complete.

I would be happy to find that 1928 dress with its belt still attached; would I realize that something else might be missing?

Anyone who works with vintage clothing knows how often the matching, self-fabric belt gets lost, leaving just the belt loops as a clue. Without a buckle, however subtle, in the middle of the waist, the design is incomplete. In fact, any items that had to be removed before dry-cleaning — from belts to rhinestone or glass buttons, or bows, scarves, artificial flowers, even jeweled dress clips that were sold with the dress — are liable to have  disappeared over time.

The vertical pattern in the black chiffon velvet, the deep V, the row of decorative buttons, and the rhinestone buckle all attract the eye to the center of the body, instead of to the width at the hip.

The decorative buttons and buckle are essential to the design of this vintage twenties’ dress.

I wonder how often I’ve seen a dress that looks complete but slightly boring, and assumed that it needs jewelry. Until I started playing with my photo program, modifying illustrations from 1926, it never occurred to me that what was missing might be two yards of contrasting ribbon!

Left, original pattern illustration; right, as they would look without ribbon or silk ties,  and belt. Patterns from May  1926. Delineator.

Since there is no black on the original dresses, there is no clue that a black accessory is missing. Imagine how easily the black ties (or a belt) would become separated from their garments! 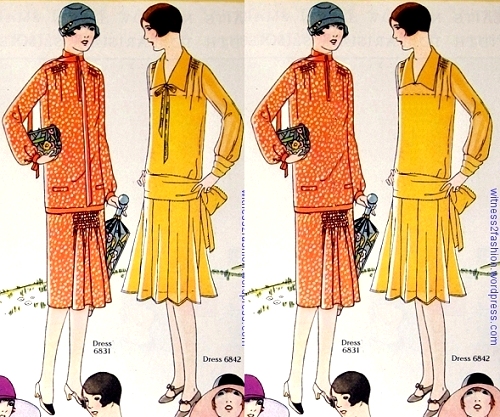 Two dresses from 1926, left, and with their long, vertical ties removed, right.

The dress on the left had long ties as part of the collar, so they would probably be intact. But the figured ribbon tie on the gold dress is not part of the dress itself, or even the same fabric. Would I think of adding such a simple accessory instead of jewelry?

Do these 1926 dresses look rather like bags? Bland? The illustrations have been altered.

I removed their vertical trims. This is how they ought to look:

All three dresses were intended to have long ties, which create vertical accents.

The struggle to draw eyes away from the horizontal hip band of the twenties took many forms, including vivid neck scarves which direct attention to the face.

Scarf from Callot Soeurs, Delineator, April 1927. No solid-color dress could compete with that high-contrast scarf. 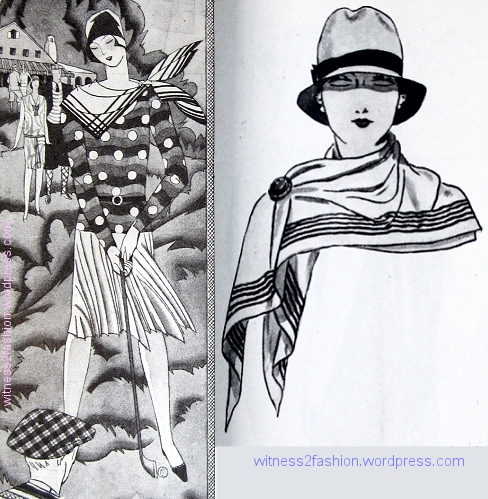 Many women used a neck scarf to draw attention up toward their faces in the 1920s. Both illustrations from Delineator, 1928 and 1927. (Even with a scarf, it’s hard to focus on the face above that striped and dotted golf sweater!) The round belt buckle (at natural waist!) is also important. 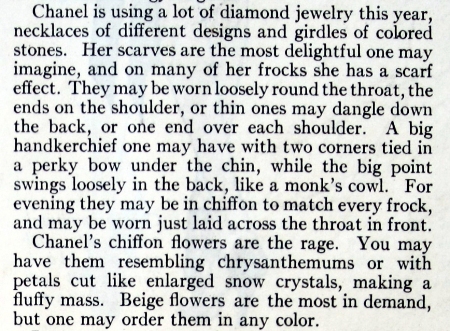 Fabric flowers, or abstract pompoms at the shoulder, were another device for drawing attention toward the face and away from the hips. 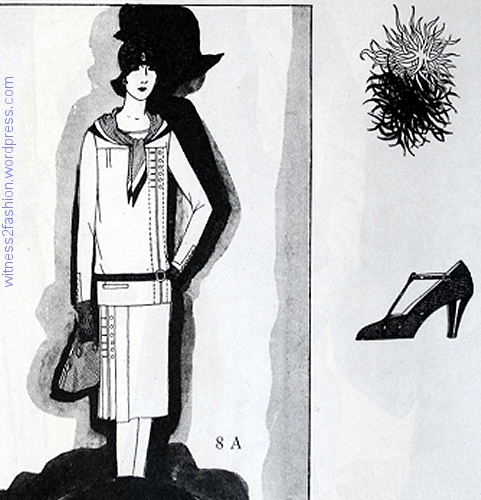 Left, a dress worn with a high-contrast bordered scarf; right, a floral pompom made of organdy, to be worn at the shoulder. Delineator, Oct. 1927. You can see it on an evening dress, below.

Twenties’ dresses with floral pom-poms at the shoulder, both 1927. Delineator.

Even in a very poor photo, this tomato red vintage dress is completed by a “pompom” of self-fabric leaf or petal shapes on the shoulder.

A cluster of red georgette petals is original to this vintage “bolero” dress.

This vintage dress from the late twenties retained both its belt with rhinestone buckle and the flowers that can be attached to its shoulder. (Removed before dry-cleaning, they were luckily stored with the dress.)

A vintage dress, late 1920s or early 1930s, which still has its original belt and its floral trim at the shoulder.

Vintage late 1920s dress, with original fabric flowers. You can see wisps of shredded organdy among the artificial flowers.

Of course, sometimes the “missing” touch is a very long necklace: 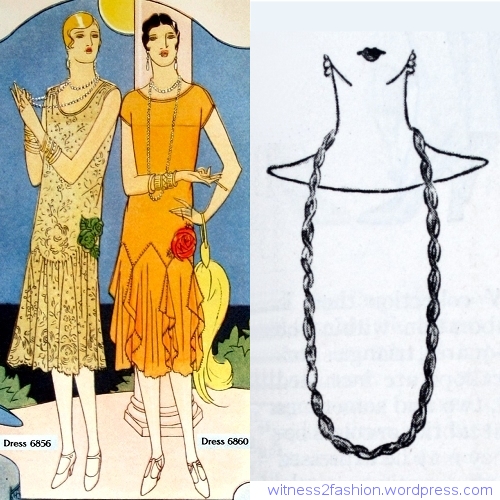 [I just saw Pola Negri in A Woman of the World, made in 1925. Click here. She was glamorous, charming, and tremendously likeable, but not as slender as usual when it was filmed. Those long pearl necklaces hung all the way to her — um — “pelvic area!”]

But a necklace would not necessarily have been the best vertical accent for these dresses: 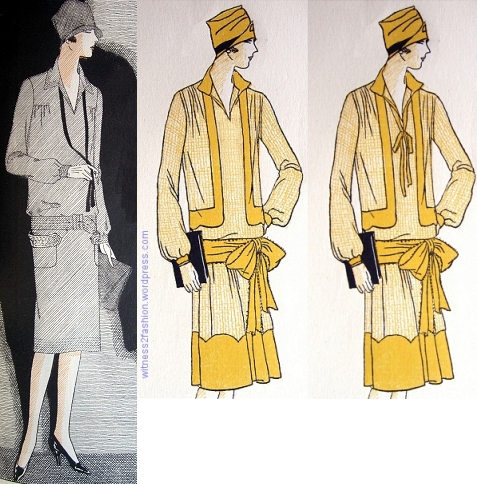 Dresses that would not be complete without their long, narrow ties. Delineator, 1927. Center, a dress with its final touch removed — and as it looked originally, right.

The dress in the center may look wider, but that is an optical illusion. Center, without its narrow self-tie, the three lines of horizontal trim dominate, drawing our eyes to the sides of the dress. Right, the tie draws our eyes to the middle of the body, and reinforces the vertical lines of the bodice trim and the hip bow.

What a difference two yards of ribbon can make.

P.S. There was a twenties’ fashion for very long necklaces — sautoirs — which had fringe or tassels at each end. They could be wrapped once around the neck — or not — and loosely tied wherever the wearer thought most becoming. Usually, this was very low, at the midriff or close to the natural waist. Such a necklace would look very much like the dark ribbon worn in the illustration at left. There is a good slideshow of a beaded, tie-able sautoir at 1stdibs.

At Antique Gown you can get a better idea of their length.