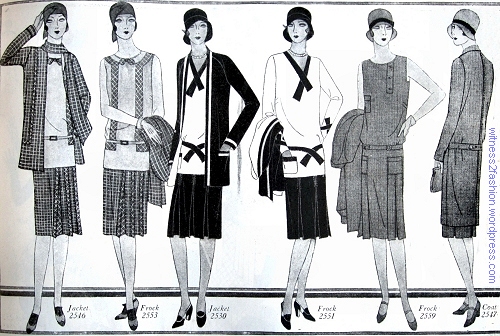 There is a time machine in San Francisco. Every year, thanks to the SF Silent Film Festival, I enter the Castro Theatre, a 1400 seat “movie palace” built in 1922,  and spend several days watching movies from the 1920’s, (and earlier) in the building where they originally played. Unlike so many of its peers, the Castro has not been divided into tiny screening rooms with the seats not-quite-facing the screen. Here, silent movies are shown on a full-sized, correctly proportioned screen, not chopped and cropped, letterboxed, or panned-and-scanned to fit a TV screen or modern movie proportions. They are accompanied by live music, just as they were in the 1920s. I enjoy my time travel with thousands of like-minded people, a number of whom dress in vintage or replica 1920’s clothes. In honor of The SF Silent Film Society, (you can scroll through their archives here) I’m sharing some suit, coat, dress and jacket ensembles ideal for an afternoon matinee in 1929. 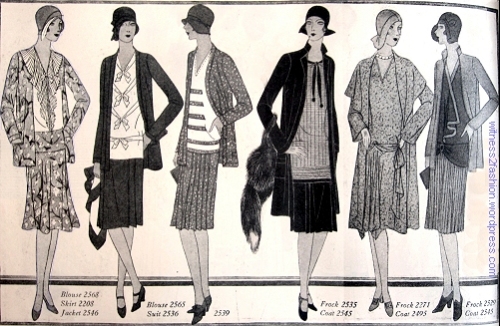 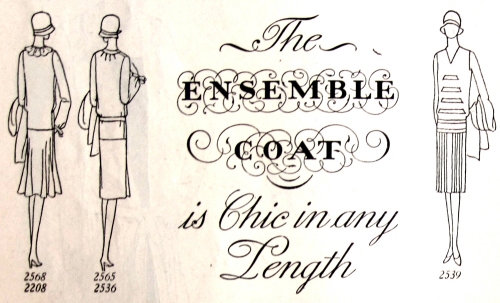 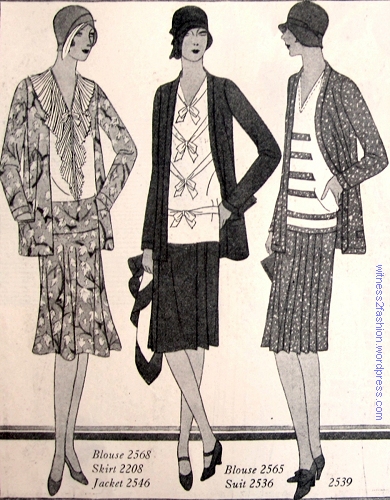 The skirt on the left is worn over its blouse; in the center, a blouse is worn over a skirt. The bands of trim on #2539’s dress form a triangular shape. This sleeveless dress has the new, square armholes. 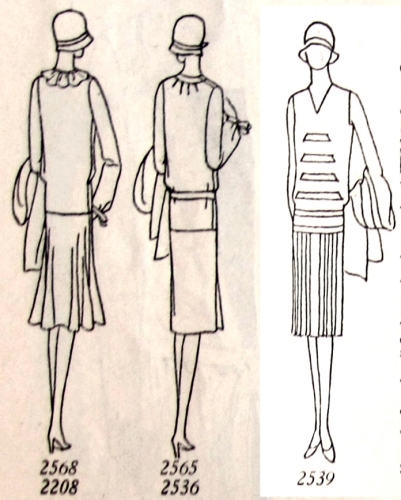 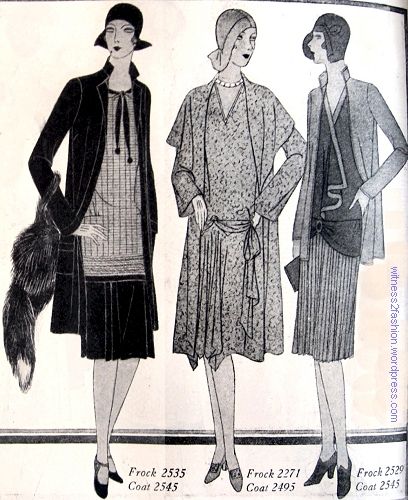 “A high color with a white or off-white blouse, or a light suit with a dark blouse — this is the new mode for ensembles.”

Coat # 2545 is shown at left in seven-eighths length over a two-piece dress which uses a border print for its very long top. At right, the same coat (#2545) is shown in jacket length. Both have standing collars. The coat in the middle, with “a youthfully wide collar,” reminds me of one I owned in the 1980’s, made of reversible material. 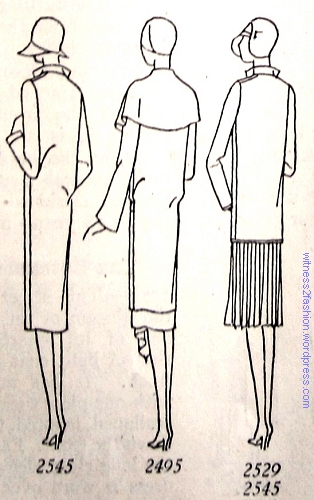 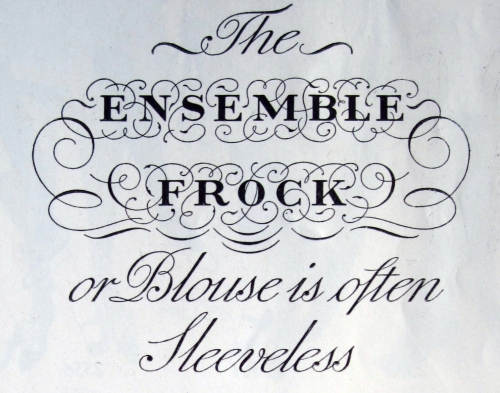 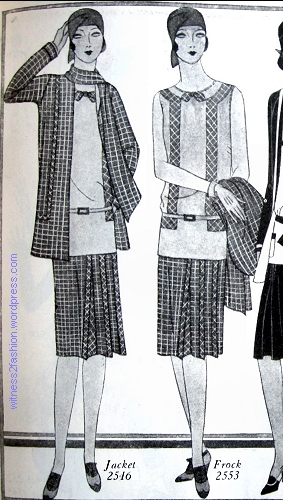 This jacket is made of light-weight [“sheer”] checked wool, with a scarf collar; it is trimmed with bias-cut bands of the same checked wool, which is also used as a trim on the wool jersey bodice of the dress (#2553). More challenging is the use of the bias check on the pleated skirt. It is drawn as if panels cut on the bias were inserted between the straight-grain pleats of the skirt. (I’d be more inclined to cut the skirt entirely on straight grain and apply the bias bands to the stitched-in pleats — I think.)

On the jacket “the bands and the scarf collar may be omitted.” In fact, this is the same jacket shown earlier, when it was made from printed fabric and worn with a matching print skirt and a ruffled blouse. 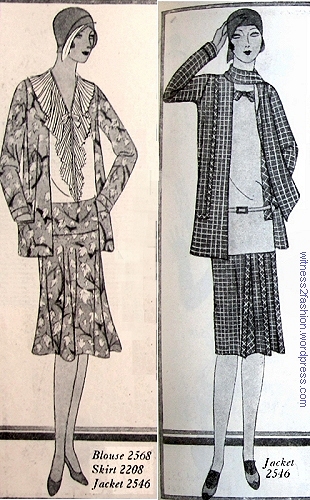 This high-contrast dress and jacket ensemble looks great in black (or navy?) and white, but Butterick suggested a different color combination. 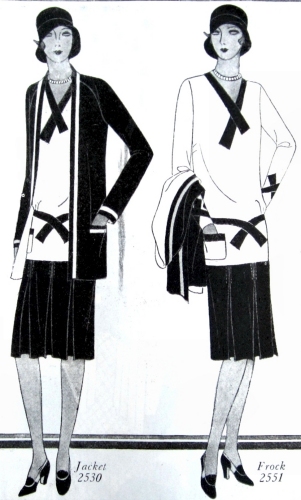 “This cardigan (#2530) is of a new length, it has the new raglan sleeve, and it is linked to its frock (#2551) by bands of the crepe that makes the blouse. The cuffs and pocket are finished with the same bands. It would be smart in a bordered material, jersey, or printed or plain crepe de Chine.” The chic dress “for the first outdoor sports events of spring” is trimmed with the same material used for its skirt and jacket. According to Butterick’s Delineator magazine,  “Chartreuse with blue or brown is very smart for this frock.” [For more 1920’s color combinations, see “A Lament for Bound Periodicals” or “1920’s Orange and Black: Not Just for Halloween.”]

I confess, I’m very impressed with Frock #2559 and its geometric but asymmetrical design: 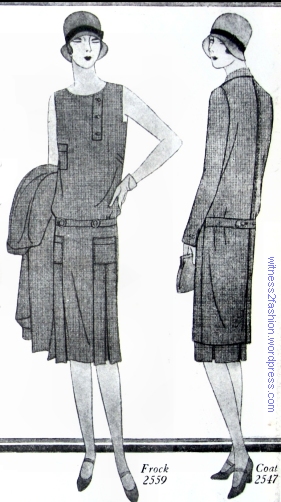 I almost think you could wear this frock  today (adjusted to normal body proportions) without  people realizing it was a vintage dress. It has square armholes, as well as square pockets. 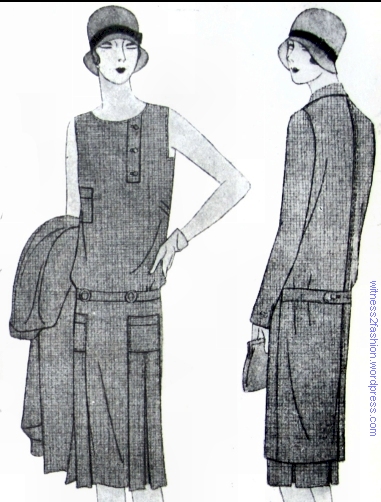 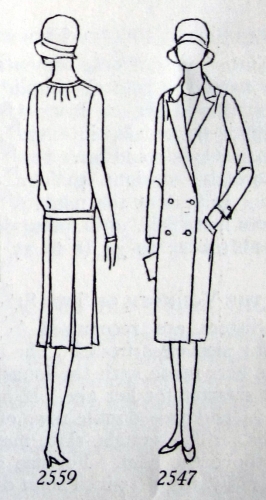 The “Reefer Top-Coat,” #2547, “is a fashion classic — double-breasted with a belt and vent in the back — but it is in the new seven-eighths length. In navy or white cheviot with brass buttons, it becomes the nautical reefer that is worn aboard ship by the smart yachtswoman. At Palm Beach it was worn for sports.” — The Delineator.

Speaking of normal proportions:  on all the dresses that are not covered by jackets, there are two shallow bust darts on each side. 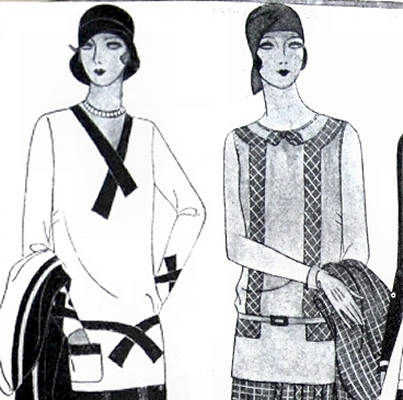 Their location is rather low by modern standards, perhaps because the torso is very elongated in these illustrations.

Also worth noting:  most of these cloche hats for Spring of 1929 have very little brim in front — if any. 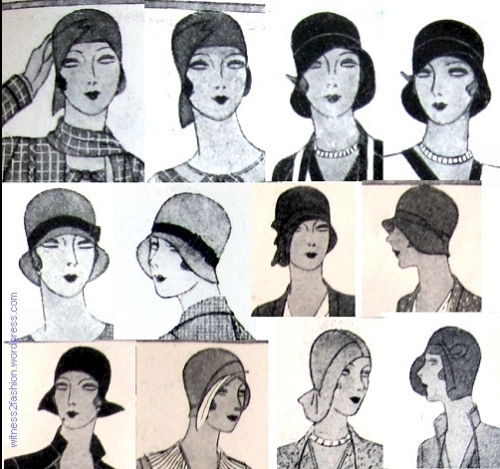 Also, the “High Style” exhibition from the Brooklyn Museum Collection at the Metropolitan Museum will be in San Francisco until mid-July. What a great summer!