Four Blouses and a Hat from January 1924

After showing sketches of Paris fashions for January 1924, it seems only right to show some simpler garments: four blouses and a cloche hat which could be made from Butterick patterns. (The two embroidered blouses are luxurious and not an overnight project, but all four are “do-able” home sewing patterns.)

“The long blouse and godet skirt are new entries in mid-year’s styles.”  From the left:

Like the other blouses in this illustration, it buttons at the hip band. Imagine how fabulous — and relatively easy — this would be in printed velvet, as shown. 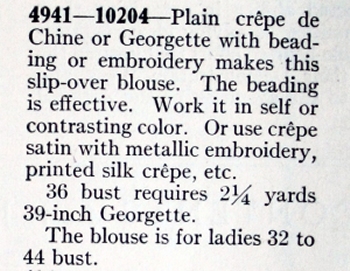 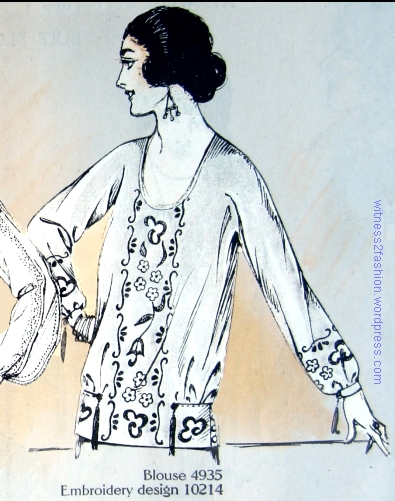 Two of those blouse patterns were available in larger-than-average sizes. (The normal range of Butterick patterns in the 1920’s fit bust sizes 32 to 44 inches.) To see more embroidered garments from the 1920s, click here.

Another blouse from the same issue of Delineator magazine is more tailored, intended to be worn with a suit; Butterick also sold the pattern for making the model’s charming cloche hat decorated with a ribbon cockade: 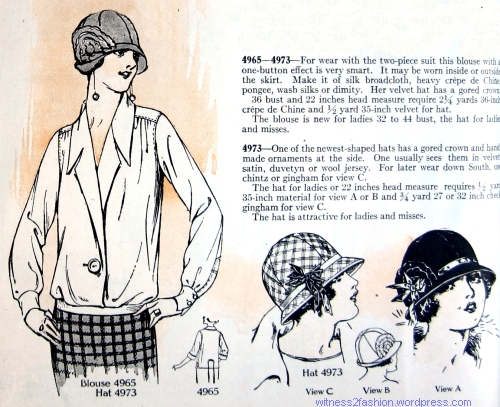 “For wear with the two-piece suit this blouse with a one-button effect is very smart. It may be worn inside or outside the skirt. Make it of silk broadcloth, heavy crepe de chine, pongee, wash silks, or dimity. . . . The blouse is new for ladies 32 to 44 bust.”

“One of the newest-shaped hats has a gored crown and hand-made ornaments at the side. One usually sees them in velvet, satin, duvetyn [a brushed wool] or wool jersey. For later wear down South, use chintz or gingham for view C. . . . The hat is attractive for Ladies or Misses.” I never thought of a chintz hat as a twenties’ authentic style, but here it is suggested by the Butterick Publishing Company.  Although Butterick sold many children’s hat patterns, hat pattern No. 4973 is not for children  — even when made from chintz or gingham. 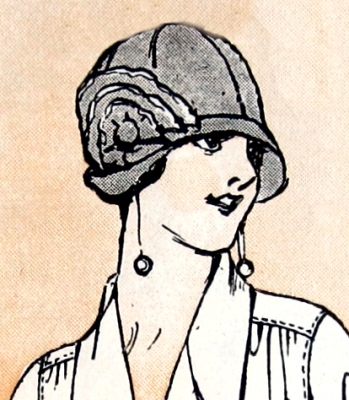 You can see more 1920’s hat patterns and hat trims by clicking here.