In 1924, dresses were still longer than our usual image of the nineteen twenties — even dresses for young women, who were usually illustrated in the shortest styles. 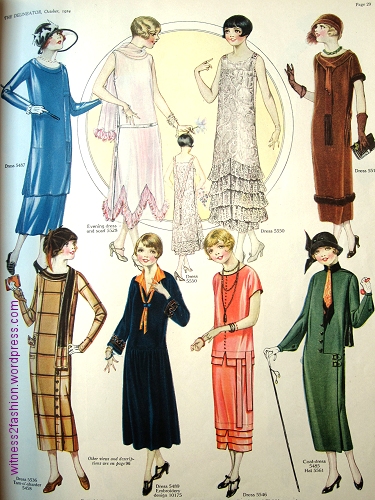 For their back views, see the end of this post.

This group reminds us that there are fashions in color combinations, as well as in cut. In 1924, orange and navy, coral and black, or green with orange and black did not evoke Halloween. Delineator, Oct. 1924. 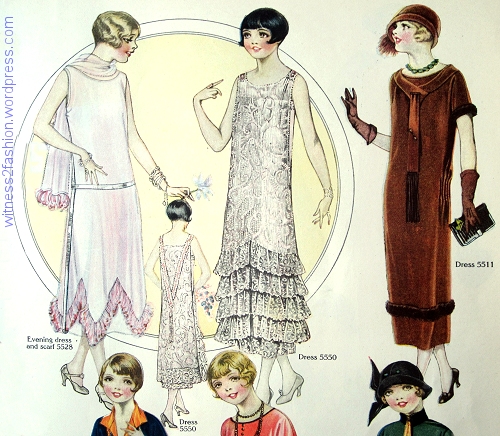 These three dresses look very long, but any of them might have been skillfully shortened and worn later in the decade. Delineator, Oct. 1924.

The evening dresses would have needed a clever remodel around 1926 — cutting them at the 1926 hip or waist line, and raising the lower part of the skirt. The new seam could have been hidden with a sash or belt, too. The tunic dress at right might have simply discarded the underskirt.

Butterick also offered many cloche hat patterns — and tam-o’-shanters — during the twenties — including two that were shown with these dresses.

A Closer Look at These 1924 Dresses and Hats

Butterick 5487, dress pattern from Delineator, Oct. 1924, p. 29. “Plaited” means pleated, not “braided.” Its scarf collar seems to end in a long fringe. This pattern was also available in Ladies’ sizes, usually 34″ to 44″ bust. The bird-trimmed hat is not a Butterick pattern, but it does have comic possibilities! [A hat trimmed with stylized bird silhouettes would be a little less old-fashioned than this flock circling her head.]

Butterick pattern 5528, for an evening dress trimmed with feathers. Delineator, Oct. 1924. A light, floating effect was recommended for dancing. 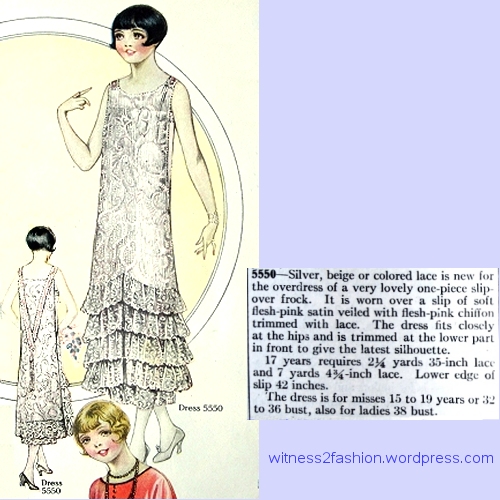 Butterick pattern 5550, from Delineator, Oct. 1924. “Silver, beige, or colored lace is new…” There is an interesting free-swinging back detail trimmed with a large tassel; but only the bottom layer of ruffles continued around the back. Available up to bust size 38 inches.

“It is worn over a slip of flesh-pink satin veiled with flesh-pink chiffon trimmed with lace.” This suggests that the impression of a nude body glimpsed through the lace was the goal. Other lining colors were, of course, possible — tan, coffee, pale blue, yellow-green, etc. In the image below, it appears that the chiffon-over-satin layer was visible at the sides.

Back trim on evening dress 5550. The trim begins with the straps in front, and extends into a long tassel, with a surprise lining of strong pink, and plenty of beads or pearls. 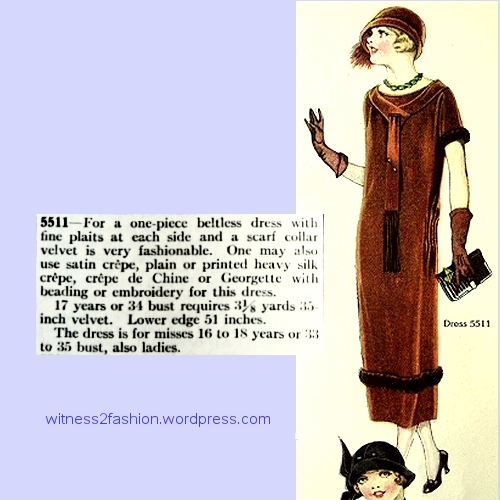 Butterick dress pattern 5511; Oct. 1924, Delineator. Velvet, trimmed with fur, and with long fringe extending the collar. The length of the gloves works surprisingly well with the short sleeves.

There are “fine plaits at each side,”  [tucks?] making the dress fit more closely at the hip. This dress from 1926 has the same “plaits” at the hip.

“It is the new narrow type [as] close fitting at the hips as one can sit down [in.]” It closes at the side front, like a Russian shirt. The pattern description suggests making it in dark brown with a contrasting scarf. In an era when ladies still did not go shopping or to work without wearing a hat, the soft, crushable Tam-o’-Shanter was especially popular with girls and young women. 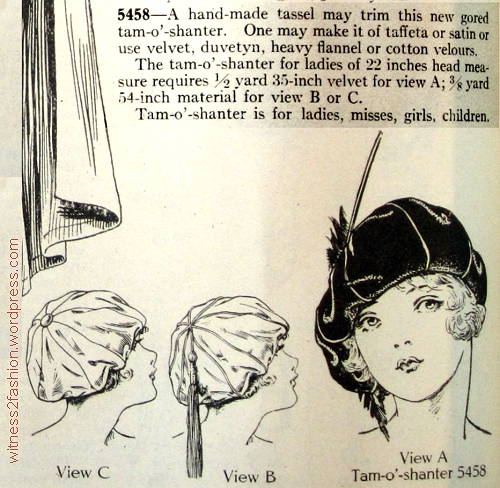 Description of Butterick Tam-o’-Shanter pattern No. 5458, Delineator, September 1924. Another use for a very long tassel. 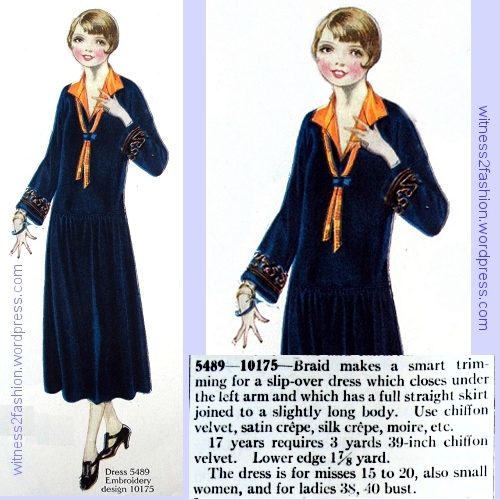 Butterick dress pattern 5489, October 1924. The orange braid on the sleeves is applied in the pattern available as Butterick embroidery transfer #10175. This dress has a gathered skirt attached to a long bodice, called a basque. See back view below.

No. 5489 could easily have been shortened at the hem and worn in 1926, when hemlines approached the knee. Its proportions could have been improved by raising the waist line as well, but it wouldn’t have been necessary.

Butterick dress pattern 5546, Oct. 1924. “It is new to use the shiny side of crepe satin and bind the edges of the bias bands with the dull side, or reverse this order….” However, the illustration seems to show black trim; a pale border this narrow would have been lost in the small printed image. 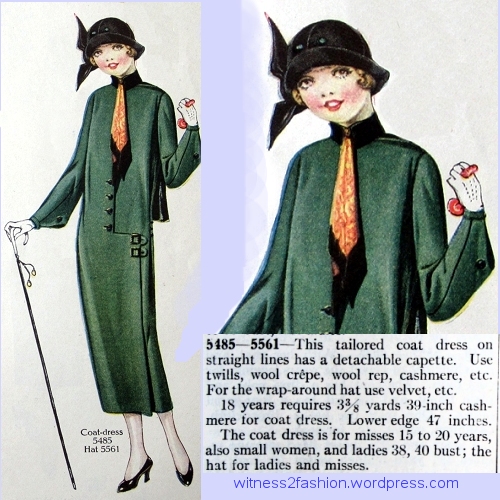 Butterick hat pattern 5561, from 1924. “The hat which ties around the head to form a trimming at the side is typically French.”

I  don’t see any knot, or other sign that it literally ties, in this illustration. This hat appeared in several issues. The side views make it look as though the velvet whatever-that-is-on-the-side is wired and possibly twisted, but not “tied.” It does look, in the side view, as if the front brim extends into a long point which is twisted up, and the back brim has a shorter extension which twists down.  I am glad I don’t have to make it, because I’m not at all certain I understand it!

Butterick hat pattern 5561 was illustrated several times in 1924. I’m not sure the illustrators were really clear on how that side piece worked, either.

Butterick’s cloche hats were usually either four or six gored. I wrote about another cloche hat pattern from 1924 here.  (The variety of easy trims on that one attracted me.)

Here are the back or alternate views for seven of these dresses.  The back of No. 5550 was illustrated in color and shown earlier.

Dresses cut like No. 5489 are often seen in silent movies, but they are usually tightly fitted, with an opening in the left side seam; or the actresses may have been stitched into their evening dresses by hand.