Before “Twenties’ Fashions” Had That Twenties’ Look

The iconic look of nineteen twenties’ fashions — dropped waists, short skirts, an emphasis on youth — didn’t really dominate until the latter half of the decade. These styles from 1924 don’t suggest flaming youth. 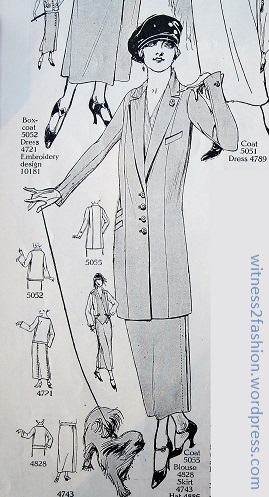 These outfits from the tubular twenties have very long skirts, just exposing the ankle area. Women’s hemlines are not much changed from 1917. The 1924 Butterick suit coat shown above, from the lower left of the page, not only looks matronly to me, it reminds me of the suits of 1910, although the body ideal is quite different. 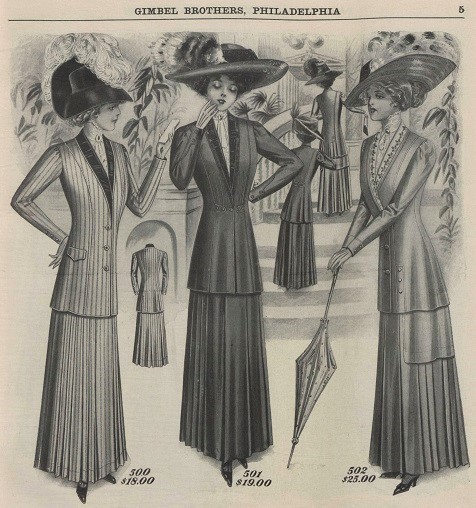 From The Gimbel Book, 1910, a store catalog in the Metropolitan Museum Library. 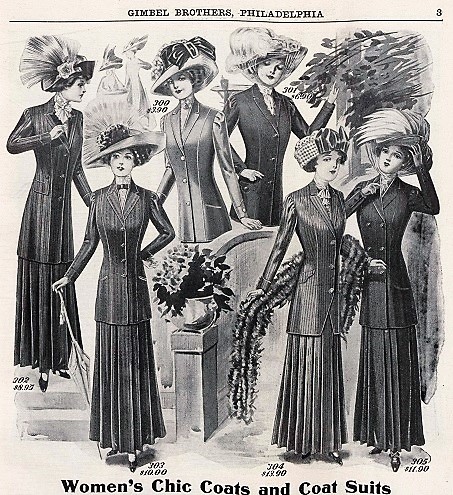 More suits from The Gimbel Book, a 1910 catalog in the Metropolitan museum collection.

Another suit, from the Bendel Collection, by French designer Jenny has a vague twenties’ look, hinting at a lowered waist, but it is actually from 1914. Here’s a closer look at that Butterick style for 1924:

An illustration from later in 1924 shows that this shapeless look (with the same hat) was not necessarily for older women:

Returning to the top of page 32, a “box coat,” elaborately embroidered using Butterick transfer pattern 10181, is at left. The dress worn under it does have a dropped waist.

Butterick coat pattern 5053 treats the female body as a long cylinder, although this pattern was available up to bust size 46 inches, which assumed a proportionately bigger hip measure.

The sack coat (as in the traditional sack suit worn by men) is shown with a Butterick hat pattern, 4973. From 1924. 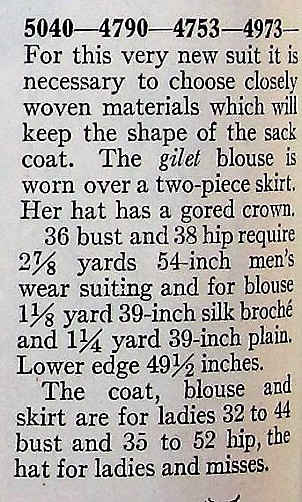 Here’s another illustration of hat 4973, worn by a much more girlish model, from April of 1924.

This last coat, from the lower right side of page 32, is rather charming, perhaps because it looks more like the fashions to come:

The model is drawn as a teen; her hem shows just a bit more leg, and the coat’s pin-tucked trim on cuff and collar hints at an Art Deco influence.

When I look at these styles, I can hardly wait for the “real” twenties to begin. As in the 1960’s, styles favored by young women and teens became dominant as the decade progressed.

One of the pleasures of pattern illustrations in old magazines is seeing the accessories that accompany them. I especially enjoyed these 1924 hats and dresses for “Misses age 15 to 20” (and for “smaller women.”) Some of the hats are actually illustrations of  Butterick patterns. Other hats and accessories seem to be drawn (in both senses) from a selection kept on hand at the Butterick offices. 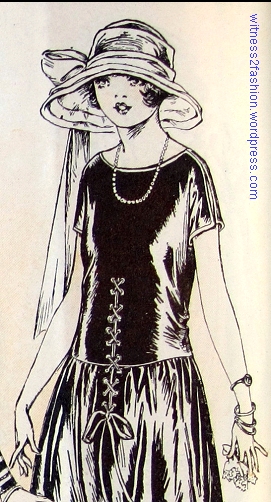 I’ll show most of  these outfits in full at the end of this post; first, I’ll show the hat details.

This Butterick dress with cape is pattern 5099. April, 1924. The cascade of roses on the hat would be easy to duplicate.

This wide-brimmed hat has a free-form pattern on the band. It’s worn with a tunic and slip combination, Butterick 5155. April 1924, Delineator. 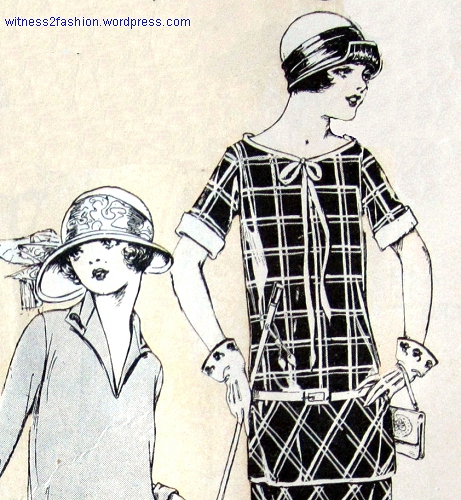 Right, a simple cloche with an oddly cut front brim is shown with a plaid dress and decorated gloves. Delineator, April 1924, p. 36.

Butterick dress 5145 is decorated with a large monogram (from a Butterick embroidery transfer.) The hat is Butterick pattern 4449. April 1924. Note the wallet-like clutch purse with a handy strap on the back. 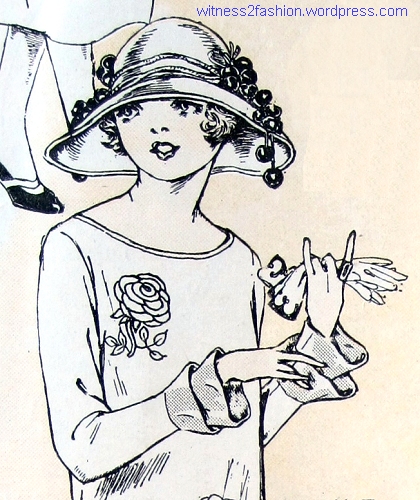 Clusters of cherries cascade from the hat worn with Butterick dress 5159. Delineator, April 1924, pg. 37. The dress is made from fabric printed with large roses, shown later in this post.

A pleated frill trims the front of this cloche, like a 20th century version of the fontange. Butterick dress 5165 is probably an afternoon dress. April 1924.

For those who are curious about the dresses, here are some full-length images:

Butterick 5481 and 5167, Delineator magazine, page 36, April 1924. Even on very young women, the hems are still several inches below the knee. The hips are made snug with tucks and buttons [!] 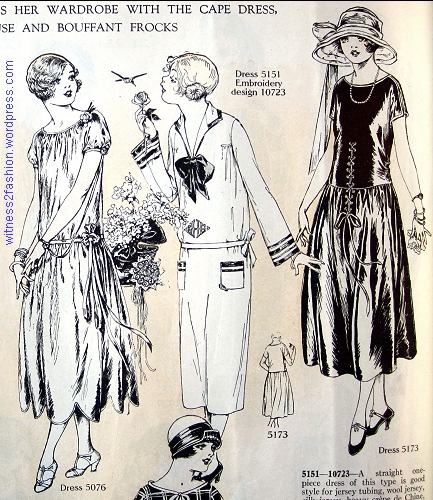 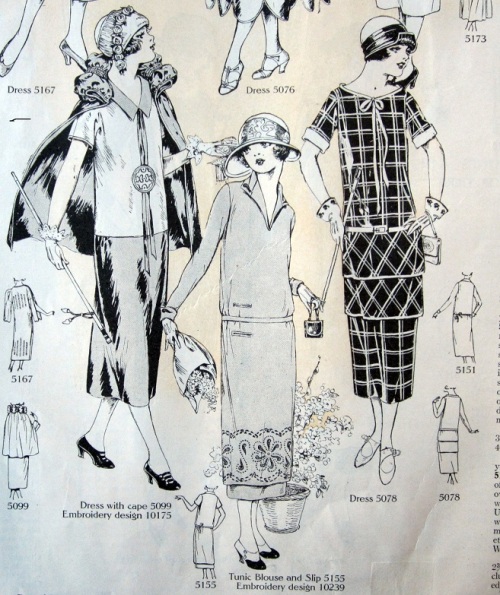 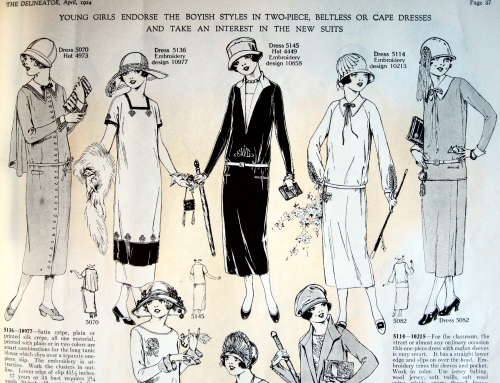