A package of gummed black beauty spots, from Johnson and Johnson, between 1912 and 1927.

When I inherited my Aunt’s house, I found this little envelope, about three inches wide. It originally contained “100 Assorted Beauty Spots manufactured by Johnson and Johnson.”
There are quite are few left in the envelope.

According to the very helpful Kilmer House website, Johnson and Johnson first made this item in 1912, and continued to sell Beauty Spots until 1927. You can read a very good article from Kilmer House about court plasters, beauty spots, and their relationship to Band-Aids (TM) by clicking here.

When I was writing about this vintage masquerade costume pattern a few days ago, I noticed that “Martha Washington” had beauty spots on her face, and remembered the little package that belonged to my Aunt Dot. (no pun intended.) 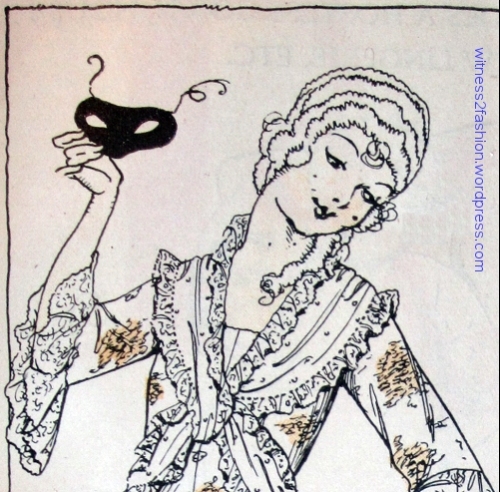 Pattern for an 18th century costume, from 1924. Accessories: a white wig, a small mask, and beauty spots.

The satirists Joseph Addison and Richard Steele, writing in their magazine, The Spectator in 1711, produced a much quoted satire on ladies wearing beauty spots (then called “patches.”) You can read it by clicking here. (It’s followed by a satire on the size of petticoats in 1709.)

The young man has a patch on his neck; the woman is wearing at least two patches. Hogarth, Marriage a la Mode, Plate III, 1745. From Engravings by Hogarth, Sean Shesgreen, Ed.

These little black patches (called “mouches” in France) could be stuck to the face to draw attention to an attractive feature (like the natural mole near Cindy Crawford’s lips.) A small black star near the eye might give importance to that feature, while  distracting us from a missing tooth, or a pimple on the nose. In fact, Steele mentions a lady who used a patch to cover a pimple, which made people misjudge her political affiliation. (He says patches on the right or on the left cheek proclaimed a lady’s politics in 1711.)

There is a wonderful gallery of 17th and 18th century images featuring beauty marks and patches at Poor Little Rich Girl by Boudoir Queen. Click here to enjoy them.

Norma Shearer in Marie Antoinette, Costumed by Adrian in 1938. From Creating the Illusion, by Jorgenson and Scoggins, p. 144.

Here is 1930’s star Norma Shearer as Marie Antoinette wearing beauty patches. Her costumes, by Adrian, were many yards over the top (and the movie was in black and white!)

Here is an Italian diagram for the placement of beauty spots.

This Pictorial Review cover from 1927 shows a woman in an 18th century white wig and a beauty spot.

Men wore beauty patches, too.  According to The Encyclopedia of Fashion,

“Beginning in the late sixteenth century, fashionable men and women imitated this natural mark by sticking black beauty patches on their faces. These patches were eventually used to send signals to members of the opposite sex in flirtatious courtship rituals, but they had a practical use as well. Carefully shaped black patches could be applied to hide blemishes and scars on the face, especially the deep round scars left on those who survived the frequent outbreaks of smallpox.” Read more here.

The historical film spectacle Orphans of the Storm (the storm was the French Revolution) opened in 1921. Rudolf Valentino’s movie Monsieur Beaucaire (1924) may also have prompted some people to wear 18th century masquerade costumes in the twenties. In this poster,  both Valentino and his female co-star wear “patches.” Here is another view.

There  was even a language of patches, just as there was a language of fans and a language of flowers. With three patches you could day “I am married” but “I entertain propositions” and “I know how to keep a secret, ” among other things.

In novels of the early twentieth century, a small cut may be treated with a self-adhesive “court plaster,” which you cut to size as needed. Practical big sisters often carried court plasters in their pockets.  Kilmer House — the history division of Johnson and Johnson —  explains the name:

“Johnson & Johnson made Beauty Spots out of materials left over from making plasters.  Since 1887, Johnson & Johnson had been making Court Plasters, which had the same origins but were the more practical cousin to Beauty Spots.  To confuse matters, Beauty Spots were sometimes referred to as Court Plasters, a name that goes back to their origins in the royal courts of Europe.  They had been used by court women, who set the fashions in their day.  According to Fred Kilmer, Court Plasters started out as fashion statements, before being used by the masses to cover small cuts and scratches. “

Into the Gloss wrote a nice summary of attitudes toward moles and beauty marks over the years. 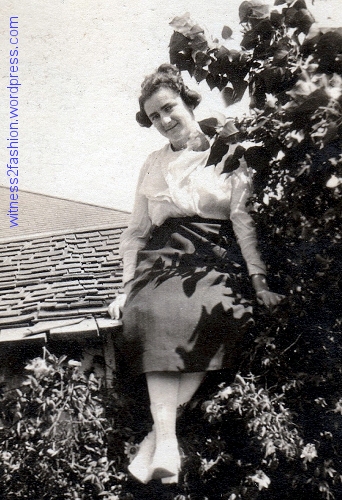 My Aunt Dot, sitting on a roof as a teenager in 1919. She liked costume parties. I wonder when she bought that package of beauty spots, and how she used them.