Redingotes in the 20th Century

A Very Generalized Brief History of the Redingote
The redingote, as the French called this fashion based on heavy overcoats worn by men for riding and coaching, appeared in the early 1700’s as a man’s coat, often split in back from waist to hem in order to fit easily over the back of a horse. By the late 1700’s there were both male and female garments called “redingotes.” [see Boucher, esp. p. 429] The woman’s redingote could open all the way down the front, but some variations were cut away in front at the waist, either partly or almost to the side seam. 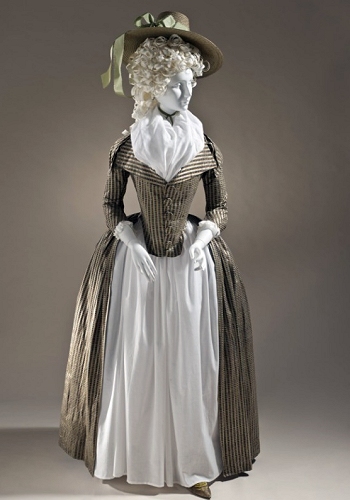 Woman’s Redingote, circa 1790. Collection of LACMA. Click here  for more information about it.

A good source of information about both men’s and women’s redingotes is Francois Boucher’s 20,000 Years of Fashion. Via the frock coat, the redingote was an ancestor of both the man’s cutaway (or “morning coat”) and the tailcoat — both still worn by men today for very formal occasions.

By the 1800’s, “redingote” usually referred to any lady’s over-garment that could be opened from neck to hem, exposing the dress beneath.

A woman’s redingote circa 1800-1805, courtesy of the Victoria and Albert museum collection. Like the male redingote, this one has several cape-like collars.

No longer made chiefly for warmth and weather protection, the woman’s redingote was a popular Regency style.

Redingote, French, 1817 to 1820, collection of the Metropolitan Museum.

Obviously, this was no longer a riding outfit. One enduring (and slenderizing) feature of the woman’s redingote was that it could be worn partially unfastened, revealing a long sliver of the garment underneath. Patterns of History has a good set of early images in its history of the redingote. Click here. The “redingote” persisted into the 1830‘s, and resurfaces periodically as a description of any overdress that can be worn open from neck to hem in front to reveal another garment which is intended to be seen.

“Redingote Effects,” nineteen twenties. The open dress in the middle, sandwiched between other 1924 fashions, is not a true redingote, but has an attached pseudo-underdress. Butterick pattern 5632 in Delineator, Nov. 1924. It was available in large sizes, too.

Couturiers had continued to use the open coat or overdress occasionally, but in the 1920’s, the redingote officially reappeared, worn open over an underdress or costume slip.

The open redingote created a long vertical line from top to bottom; it should have been very appealing to women who were not flattered by the low, horizontal belt of the 1920’s. 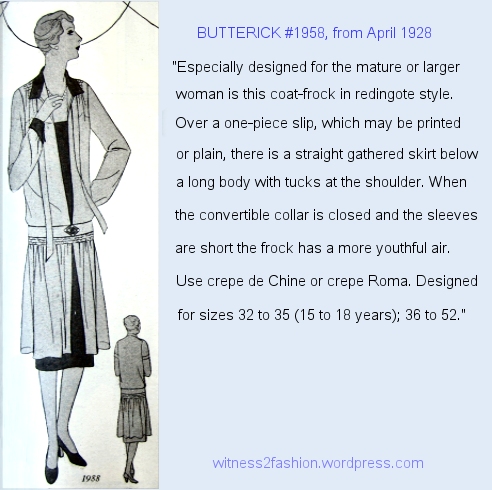 Butterick pattern 1958, from April of 1928, was recommended for the larger woman.

This redingote style was also available for larger women up to size 52:

Butterick pattern 2048, from May 1928. Delineator magazine. “A separate one-piece slip is worn under the dress.”

The next two nineteen twenties’ redingotes, both Butterick patterns, were made of sheer fabrics and worn over an opaque undergarment. They were not described as redingotes, but as coat-dresses. However, the dress and coat are separate garments.

On the left, a coat-dress in redingote style, for young women, from September 1926. Butterick pattern #7024. 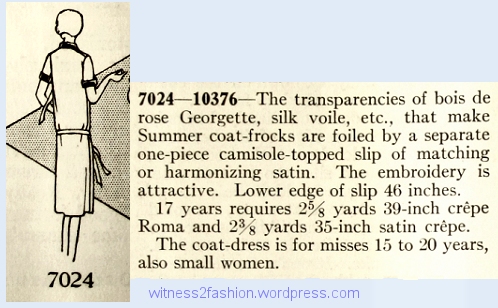 [“Bois de rose” — rosewood — was a chic 1920’s brownish-pink color. The matching satin slip of a coat-dress would never have been worn by itself.]

An “ensemble costume” with a sheer coat open down the front to reveal a polka-dotted dress. Butterick 6952, Delineator, July 1926. This under dress (“slip-over frock”) could be worn separately. 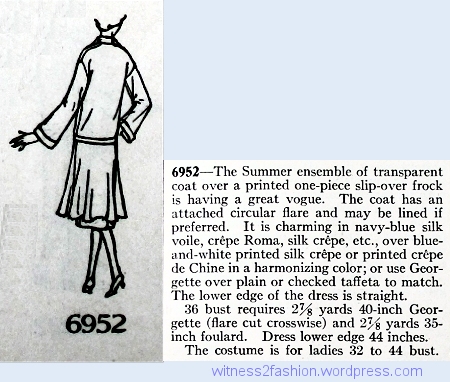 Back view and description of Butterick ensemble 6952, from 1926.

If you’re afraid that you’d look like a sack of potatoes in a 1920’s dress, consider a twenties’ ensemble like this one — perfectly authentic. The print collar draws our eyes up toward the face; the belt is not tight enough to cause a blouson effect.

Redingotes in the 1930’s
The redingote continued into the 1930s, and was made in see-through materials later in the decade.

Delineator, April 1931: “The Redingote … comes up every few years and each time is is an immediate success.” The redingote on the left “has its bolero only in front — the back is made in one piece — bloused at the waistline.” The coats of these redingotes fasten only at the waist. 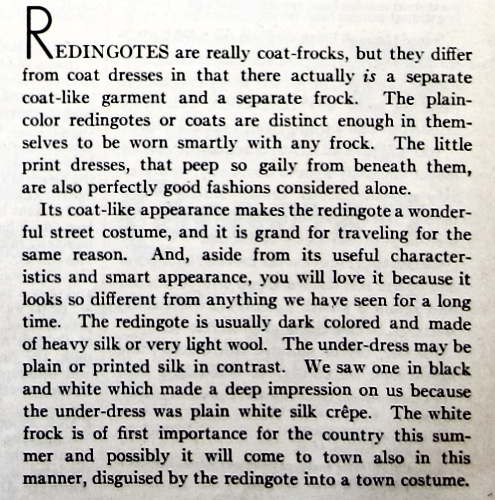 “It looks so different from anything we have seen for a long time.” In Delineator magazine, “a long time” was apparently about three years, but the 1930’s fitted waist and long hem are quite different from 1928’s redingotes. Here are Butterick redingotes 3837 and 3850 without their coats: 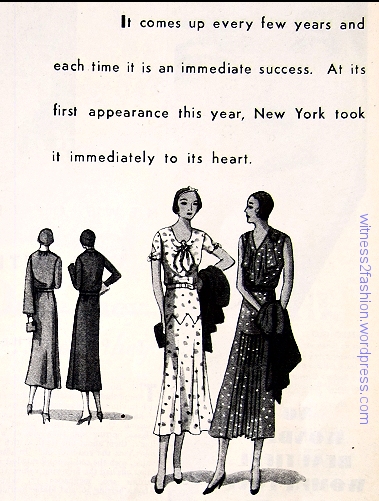 A redingote was again recommended for its slenderizing properties in 1938:

Butterick redingote pattern 7853 from August, 1938 Butterick Fashion News. This pattern was “for shorter, heavier figures” up to bust measurement 52 inches.

But the redingote below, from the same issue, was part of a fashion for sheer summer clothing:

A sheer redingote: Butterick 7991, from Butterick Fashion News flyer for August 1938. Available in bust measurements from 30 to 40 inches.

And now it’s time to thank Lynn at American Age Fashion for showing us this photo by Ben Shahn from the Library of Congress archives:

Two ladies celebrating the Fourth of July, 1938, in Ashville, Ohio. From the Library of Congress. Detail of a photo by Ben Shahn.

It was Lynn’s post about these older women wearing sheer dresses that made me wonder, “Is that a redingote on the left?” (I’m still not sure, since it doesn’t fall open below the waist.)

And, now that I’ve lightened the image, I see that the dress on the right is only closed at the midriff, exposing the under slip. Could it be called a redingote, too? If it opens down her back, or at the side, no. But if those buttons are not purely decorative, and it opens down the front, yes.

Both ladies have secured the collars of their dresses, one with a bar pin and the other with a flower pinned in place.

Thanks, Lynn, for inspiring my 20th century redingote quest!