This is the third set of patterns based on Orry-Kelly’s designs for movie stars and featured in The Delineator magazine. (Click here for Part 1, Bette Davis and more about Orry-Kelly.) (Click Here for Part 2, Kay Francis.) Butterick had permission to make exact copies of the clothes worn in certain movies in 1933. 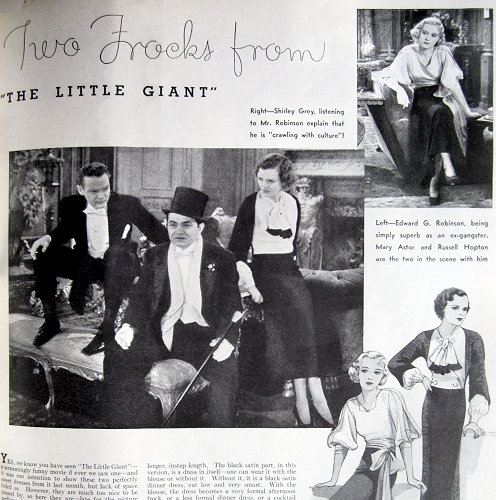 One of these Butterick Starred Patterns was a dress for Mary Astor, who really was a star in the twenties, thirties and forties, and the other was for Shirley Grey, a lesser-known actress. 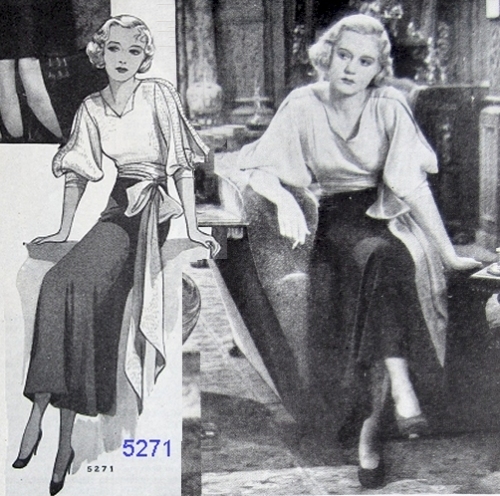 “Shirley Grey’s dress [Butterick 5271]  is one of those “frocks with ideas,” ideas for making itself into several. You can do things to it and obtain at least two frocks, possibly three. Made just as you saw it in the picture, it is simply a lovely afternoon dress consisting of a black satin skirt, on a thin underbody, and a white crinkled satin blouse. But made another way (and the pattern made of this dress provides for this version, too) it still looks just as you see it here except that the skirt is longer, instep length.”

Oddly, although Mary Astor’s dress was illustrated again, in a different fabric, in a later issue of Delineator, the alternate views of dress 5271 were described, but not pictured.  Perhaps they thought this lengthy verbal description was enough:

However, you can see this dress without the “blouse” at the Vintage Pattern Wikia. Click here.

This dress was illustrated in another version in the next issue of Delineator, August of 1933. It didn’t mention Mary Astor or the movies: 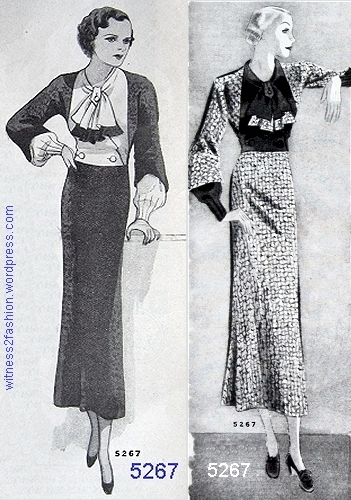 Butterick 5267 as described in the August 1933 Delineator.

You can see a larger illustration of 5267 at the Vintage Pattern Wikia.

Mary Astor was a child actress whose career lasted well into middle age. She played Ophelia to John Barrymore’s Hamlet on the stage,  transitioned easily from silents to talkies, survived a huge scandal, and graduated to mature roles (and an Oscar *TM*) in the 1940’s.  She is best remembered as the temptress in The Maltese Falcon, the mother in Meet Me In St. Louis, and Marmee in Little Women.  The list of her credits (155 movies and TV episodes) at The Internet Movie Database pretty much defines “working actress.”  She also wrote two books: My Story and My Life on Film.  You can get a tiny sampling of her work in this one minute Tribute from Turner Classic Movies.

The real star of the picture was Edward G. Robinson, who had a blazing hit in 1931 playing a ruthless gangster in Little Caesar. The Little Giant allowed him to play a gangster in a comedy. Here he is explaining that he is “crawling with culture.” [In fact, Mr. Robinson was a deeply cultured, educated man, but, as beautifully explained at the Pre-Code movie site, his physical appearance made him an unlikely movie star.]

“You definitely can’t build a star like Edward G. Robinson. A Jewish-Romanian who’d studied to be a Rabbi before trying law school and eventually working his way to the theater, Robinson worked on Broadway for fifteen years and made his first appearance in a silent film in 1923. But when the talkies came, so came Robinson’s voice to the masses– a distinctly New York-ian snappy piece of work, a raspy growl that signifies a great deal of soon-to-come fury. Little Caesar is the movie that made Robinson a star, a role that allows him to embody a character of unstoppable, aggressive malice. His character of Rico, AKA Little Caesar, is a bully in search of the American dream, all too eager to find the next guy to squeeze it out of. He’s not just a thug– he’s charismatic and clever. And, most importantly, he’s ruthless.” — Pre-Code.com

The TCM tribute to Edward G. Robinson is six minutes long, but a reminder of his versatility. Click here.