Delineator ran regular features on the latest Paris collections, often sketched by [Pierre] Soulié or Leslie Saalburg. [“Djersakasha is a cashmere jersey that could be woven as a tube, eliminating the need for seams.”]

The February 1928 issue also showed photographs of designer fashions that could be purchased in New York. [A needed reality check after all those 1920s’ fashion illustrations!]

The coat is by Frances Clyne, a top-level dress shop; the evening gowns are couture designed by Louiseboulanger and Chanel. Delineator, February 1928.

The “flesh color” Louiseboulanger gown could be purchased (and custom fitted, of course) from Frances Clyne. The Chanel could be bought at Lord & Taylor. (Note: Chanel was already selling costume jewelry in 1928.)

I can never get used to the “draggle-tail” look of these evening gowns under a coat, but this 1928 photo is proof: “This is the sort of dress for which the coat at left was created.”

This corduroy coat — very casual — is by Patou [Couture corduroy…!]

This dress by Vionnet is also inspiring. [P.S. I wore dresses with that standing collar in the 1960s. Her influence just goes on.]

Thanks to a lecture by Sandra Ericson, I know that the tucks in the bodice fabric would have been done on the straight of grain, and the bodice pattern would then have been placed on the fabric with the center front and back aligned with the bias. Vionnet sometimes used fabrics so wide that they had to be custom woven. We could imitate this bodice by hiding a seam under one of the tucks, if necessary. The original was in crepe satin, but I can imagine it inspiring a modern top with sheer black sleeves….

This white satin evening dress from Lanvin is really typical 1920’s style, with its beaded hip band and simple lines. A cape was often seen on twenties’ patterns, but, being optional, many dresses were made without the cape.

Delineator sketch of a couture gown by Lanvin, Paris, February 1928.

“Lanvin puts a swinging cape on this white satin frock, since the back is so important a part of a dress for dancing. The waistline is banded with feathery embroidery in small silver and white pearl beads.” That center panel would also be lovely for dancing, and, like the Chanel gown, it seems to have a “paste” jewel as an accent. A stack of bangle bracelets was also a chic Twenties’ touch.

The long-established House of Paquin produced this evening gown:

The V-neck on the back of this turquoise couture gown by Paquin is echoed in the hip band and scalloped hemline. The hip band tied in front. Photo from Delineator, February 1928.

[I think a “flesh” or “cafe au lait” lace inset (or slip) can be seen in the low neckline opening.] This couture original was imported by Hattie Carnegie‘s New York store.

According to Lizzie Bramlett, writing at the Vintage Fashion Guild Fashion History site, customers could buy a Paris original from Hattie Carnegie, or buy one of her copies, made in New York. 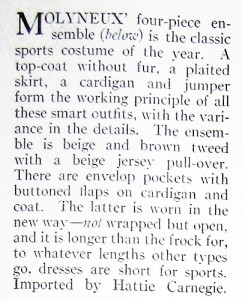 Here is a list of other fashion trends, including colors, which appeared on the same page as the Molyneux ensemble and the Paquin gown: 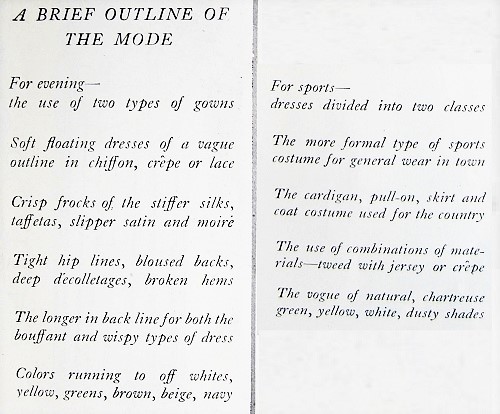