A year ago, I found a way to date Butterick patterns using Delineator magazine (published by Butterick) and later Butterick publications, and posted my results at witness2fashion.com. Click here for my original post explaining my Delineator methodology. For Part 2, click here.

Monthly Butterick Fashion News flyers like the one above were given away by fabric stores, so it is possible to date Butterick patterns — roughly — by following the sequence of numbers that appeared on the cover of each issue. (Butterick resisted putting copyright dates on its patterns until late in the 20th century.) Here’s a small portion of the resulting chart: 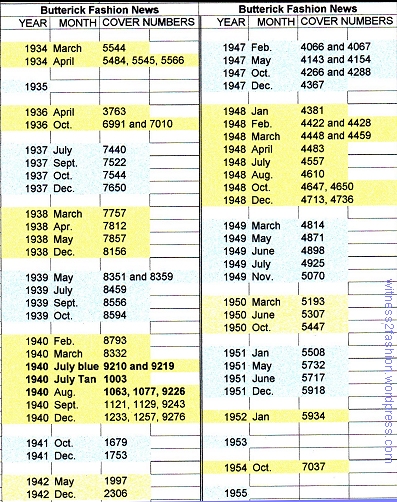 A small portion of my Butterick Fashion News chart relating pattern numbers to dates. April 1936 was an anomaly; otherwise, the numbers are sequential, in spite of large gaps in my data.

This is an ongoing project; I especially want to find flyers from 1962 and 1963, because pattern number 9968 appeared on the Butterick Fashion News cover in November 1961. A new sequence of four digit numbers began soon after that, but I haven’t found any flyers from December 1961 to October 1964 (when pattern No. 3288 was on the cover).  It would be nice to have proof that renumbering began with a 1000 series in January 1962.

I found those 1940’s numbers by searching for Butterick Fashion News  flyers that were for sale online and writing down the number of the pattern on the front cover. I can’t buy them all, but here are a couple (before and after re-numbering started) from my own collection:

Butterick Fashion News cover for December 1942. This is dress pattern #2306.

It’s also possible to date Butterick and other patterns by using the Commercial Pattern Database (CoPA), but this site does not allow you to search by pattern number. You can sample [how] their search works by clicking here.     [Edited for typing error 1/13/2015.]