It’s easy to forget that the decade known as The Twenties saw considerable changes in fashion. The period of ‘bound breasts’ and cylindrical figures was ending by 1925. I think of the early 1920s as the ‘tubular twenties.’ The long, tubular dress pattern on the left, illustrated in Delineator in December, 1924 is closely related to this actual beaded dress from a private collection.

A Butterick dress pattern from December 1924, and a vintage beaded dress from the same period.

Both dresses are very long, and hang straight from the shoulders; the concentration of beading near the hem weights the dress. 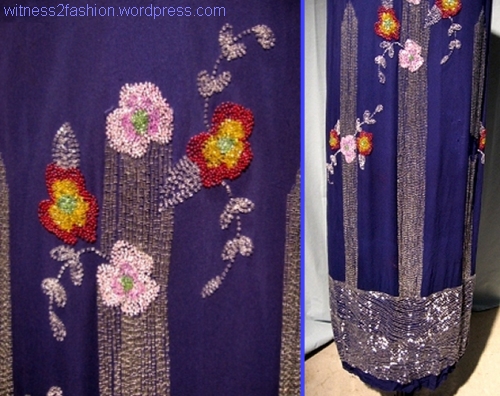 Details of the beading on the front of the dress.

This beading was probably done in China, for export.

The back of the chiffon dress was also beaded, so it was relatively heavy and fell without curves.

Other designs from 1924 show the same long, cylindrical shape, with style variations.

Many fashion trends associated with the later 1920s are visible:  embroidery, a cloche hat, some dropped waists, side panels, etc. But these dresses are actually longer than the dresses of the World War I era, and they share the peculiarly low bust of that period.

The styles above are for adult women. Patterns for teens, then called  ‘misses’ and sold by age (“size 15 to 20 years, or small ladies”) show the same tubular shape and low bust, but are slightly shorter. 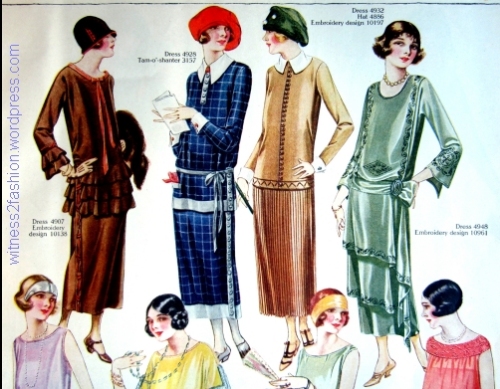 The blue checked dress shows some indecision about the dropped waistline, and opts for two, a belt at the high hip and a band much lower. The dress on the far right has front panels and ends in a sash, like blouses of the early 1920s. It’s hard to imagine how a slim teen-aged girl could have the bust shown in the tan pleated dress, unless she was wearing a bust-flattening brassiere or bandeau, or a tube-like corselette (more about these in a later post.)

The surplice line dresses on the left remained popular throughout the twenties, as did cloches and tam-o’shanter hats. The blue dress on the right — shortened and with a slight change in proportions — became a classic style for the rest of the decade. Below:  This is how Chanel interpreted it in January, 1925. Note the change in length, the bust dart, and the natural bustline. The flattened chest was going out of fashion.

Chanel design, January 1925, as sketched by Soulie in Delineator. 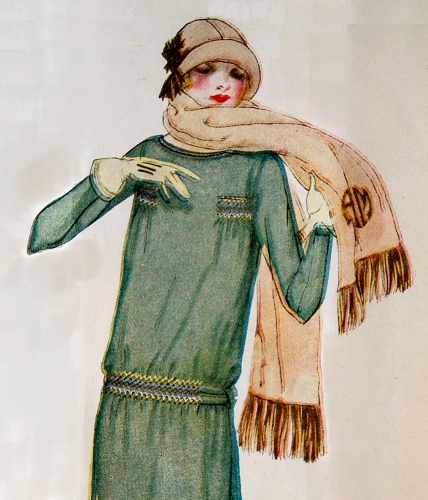 One Vintage Pattern Leads to Another

Photo used with permission of connieandcompany

When I used this blouse pattern, # 5508,  as an example of how vintage Butterick patterns could be dated using witness2fashion.com, I discovered four other interesting blouses on the same page of the Delineator, September, 1924.

Blouse #5486: “A new costume is composed of a jacquette blouse of crêpe de Chine, silk crêpe, or satin crêpe and a one-piece wrap-around straight skirt of soft twills, etc. The embroidery is easily done.” [Hmmmm. Define “easily.” It seems to be done with a blanket-stitch. You could purchase Butterick embroidery transfer 10225.]

Blouse #5490:  “The scarf collar slips through a slash and gives a new effect to this slip-over blouse of plain or printed crêpe de Chine or silk crêpe, or of satin crêpe. 36 bust requires 1 3/4 yard 39-inch novelty crêpe.”

Blouse #5498 and Hat #5353:  “Both collar and cuffs of this slip-over blouse with a shoulder yoke may be sewed to the blouse or detachable. Use silk broadcloth, heavy crêpe de Chine, silk jersey, silk crêpe, etc. For the tricorne hat use velvet, duvetyn, etc. “

Both these blouses could be made with long or short sleeves. [Theatre curtains are often made of duvetyn, a brushed pile fabric which was light-absorbent – like velvet – but sturdy and able to be treated with fire retardant.]

And a 1920s Tricorne Hat Pattern

I associate clôche hats from the Twenties with felt or straw, but several four-gore or six-gore Butterick hat patterns were available for the home stitcher, and could be made of wool, silk, velvet, etc.

#5353:  “One of the latest arrivals in this country from Paris is the smart little tricorne hat with its gored crown. It boasts a hand-made ornament on its brim. Make the hat of wool jersey, serge, soft twills, duvetyn, broadcloth, camel’s-hair, satin, or taffeta.” [The hat would need to be stiffened; Custom Milliner Wayne Wichern says he uses tailoring supply natural hair cloth in his taffeta and silk hats.]