Biased in Favor of Vionnet and Sandra Ericson, Part 1

Back of a gown by Vionnet, 1932. Photos: Metropolitan Museum

I can’t look at 1930’s fashions without being constantly reminded of the genius of Madeleine Vionnet. She was a successful couturier in the 1920’s, when fashions were mostly tubular, falling with the straight of the grain, but it was Vionnet’s exploration of fabrics used on the bias — which allows woven fabric to stretch — that is, for me, the “look” of the thirties.

Dresses that cling to every curve and pour over the body like water . . . .

“Mermaid gowns” that glide over the hips and flare near the hem . . . .

Jean Harlow in a slinky halter dress . . . .  All show the influence of Madame Vionnet.

In November, 2010, I attended a lecture on the techniques of Madeleine Vionnet given by Sandra Ericson, who runs the Center for Pattern Design. It was one of the best organized presentations I have ever heard — packed with information, and illustrated with slides and with half-scale and full scale Vionnet reproductions that Ericson had made. (Yes, we were allowed to touch them and examine them.)

As a member of an organization of costumers who work in professional, educational and community theatres, I took plenty of  notes and shared them with members who couldn’t attend. I will post them in Part 2 of this series.

One of the things Ericson said about Vionnet’s draping technique (there is more about it in Betty Kirke’s book,  Madeleine Vionnet) was a real  “light bulb goes on over my head” moment for me.  Actually, since I had been draping and drafting patterns for 30 years at that point, I should probably call it a “Well, Duh!” moment.

Ericson (and Betty Kirke before her) pointed out that Madeleine Vionnet cut geometrically. Vionnet based her cutting on circles, squares, triangles, rectangles, and especially on the quadrant (quarter) of a circle. Her early 30’s dresses were cut on the straight, seamed on the straight grain, and worn on the bias. [More about that later.] Some of her loveliest bias gowns were based on a quarter circle, slashed to create a V neckline or an armhole, with triangular inserts, or were formed from four identical pattern pieces, often cut as rectangles, stitched on the straight, worn on the bias.

Nightgown by Vionnet, 1930. The quadrant has been slit at the top and sides, and triangles inserted at the sides. Photo: Metropolitan Museum.

I think these concepts are worth writing about here.

Forgive me if I seem to be stating the obvious to some readers; I never took a sewing class until I started my MFA program. My Girl Scout leader taught us how to operate a sewing a machine and use a commercial pattern; after that, I learned mostly from making commercial patterns and following the instructions. So I knew enough to pay attention to “straight of grain” and “bias grain” when cutting out a pattern; I knew what the words meant, but not how they affected the outcome. It wasn’t until grad school, when I started draping fabric on a professional dressmaker’s mannequin (the kind that costs hundreds of dollars) that I had a clue.

Everything that follows applies to simple, woven fabrics, not to knits or stretch fabrics.

The important thing about the bias is that it stretches. If you pull on a square of fabric with a hand at each side, or a hand at top and bottom, it doesn’t stretch much. But if you take hold of two opposite corners and pull, the fabric will stretch. That is why “bias tape” stretches, and bias cut skirts mold to the body. 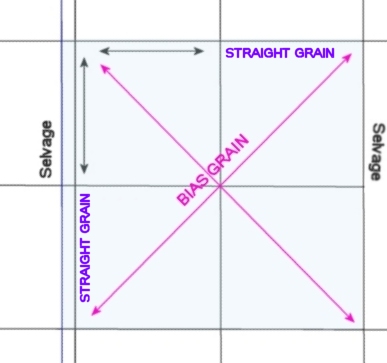 The Magic of Draping

Suppose that you have cut a simple skirt out of muslin. It has just a back and a front, and each is a quarter of a circle, with a slightly curved line at the waist.

If you pin the skirt front to a mannequin and pull the center of the waistline up just a half inch or so, an amazing thing happens:

Raising the center of the waist just a small amount will change the way the skirt hangs.

The sides will move closer together, and the fullness of the skirt, which was evenly distributed, falls toward the center, directly under the place where you raised the waist.  Keep this in mind when looking at 1930’s dresses. The tiniest “tweak” at the waist will determine where the folds congregate — to the center, to one side, etc.

A godet (a wedge of fabric usually shaped like a pie slice) is typically a section of a circle.  Often a godet  is inserted between two straight-of-grain panels, where it falls into evenly distributed folds like these:

But, in the godet at the left, below, and the skirt at the right, the fullness has been “tweaked” to force the folds away from the center front. The fabric has been lifted a bit at the points of the yoke.

Playing with fabric’s behavior and making discoveries like this is one of the joys of draping.

In this evening ensemble from 1932, Butterick mentions the influence of Vionnet. Because the fabric has a vertical stripe, we can see the grain very clearly. The dress is cut on the lengthwise grain, following the selvage. The godets are cut on the cross grain. And the jacket hangs on the bias.

Here is a later wrapped jacket by Vionnet in the Metropolitan Museum collection.

Cut Cut and Sew on the Straight Grain; Wear on the Bias

Another of those “Well, Duh!” moments for me.

To illustrate “cut and sew on the straight, wear on the bias,” I’m rotating that Butterick evening gown 45 degrees.

The panels of the bodice are cut and sewn on the straight grain and used on the bias in the finished dress.

This beautifully made early 1930’s dress was butchered by having one sleeve torn off.  Luckily a collector recognized its quality (the squares were hand-stitched together!)

Vintage bias silk dress made with squares of fabric stitched together with fagoting. On the right, I removed the confusing shadow.

It is a bias-cut dress, and flows over the figure, clinging to every curve. But it was made of squares cut on the straight grain: 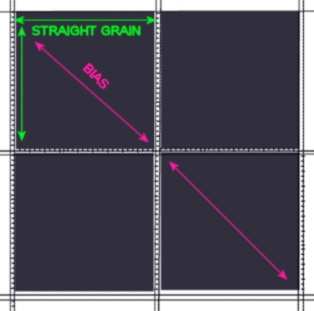 Squares with the seam allowances folded under and connected with fagoting.

Before being made into a dress, the stitched-together squares were tilted 45 degrees:

Now the dress has bias stretch in two directions.

Detail of cross-stitch fagoting, which allows the undergarment to show through. These loose seams allow even more stretch. Vintage black silk dress in private collection.

In the words of the old gravestones: “Go thou, and do likewise.” Play with fabric. Experiment with bias. ( It’s O.K. to use a sewing machine!)

More about Sandra Ericson’s brilliant lecture on Vionnet  in Part 2.