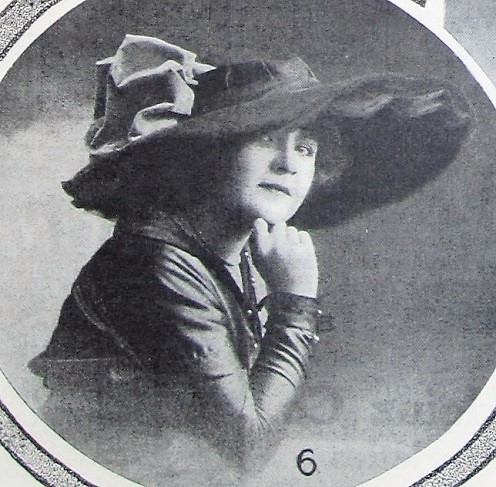 It’s hard to imagine some of these hats as suitable for fall and winter, but High Fashion isn’t supposed to be practical. The wind wouldn’t dare disturb a wealthy Parisienne. 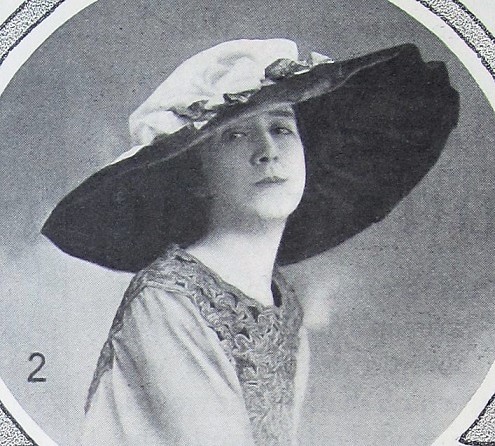 Most of these hats from Paris designers were featured in a two-page photo spread in Delineator, October 1912, pages 272 and 273. 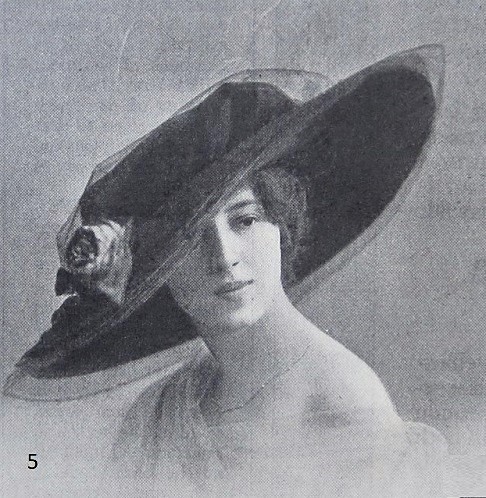 A Paris hat from Suzanne Talbot. Delineator, October 1912. She was a noted milliner and couturier in the 1920s. Hat of auburn velvet, self-colored tulle, with white and brown roses.

A bigger, sheer layer softens the brim of several hats. 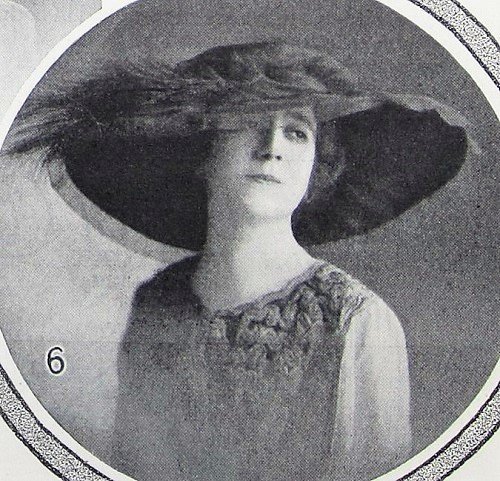 Like Talbot, Lanvin also used a layer of sheer fabric [“frills of black tulle”] to make the hat even wider. 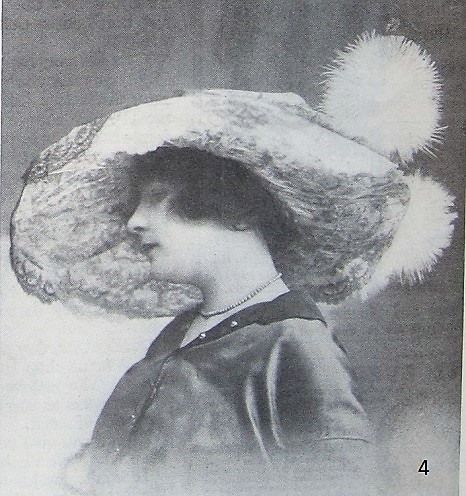 Georgette covered this hat with lace, which seems [to me] an odd choice for fall /winter wear. I had to put this through a photo enhancer to show the detail.

“Evening hat of black and white Chantilly lace turned up at the back. The black lace is used over the white.” Two layers of Chantilly lace? Very extravagant! [This is the first time I have seen an evening hat this large! And the model is not dressed for evening, is she?]

The fabric called Georgette, a crepe-like chiffon, was named after this designer. Georgette de la Plante, who was quite popular in the 1910s and 1920s. 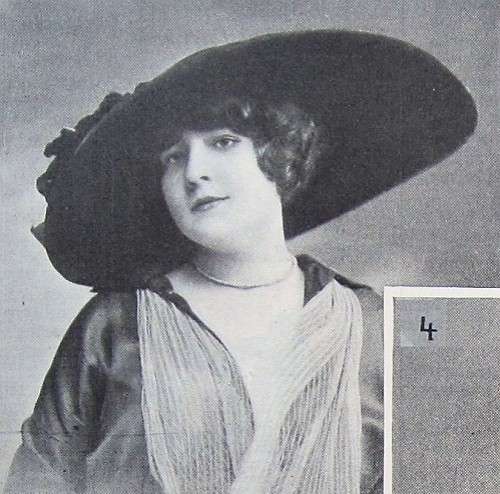 Another very wide hat from Georgette. Delineator, October 1912. “Bell-shaped hat of black velvet rolled up at the back and trimmed with roses.”

Those gigantic hats got my attention, but there were more practical hats from chic designers: 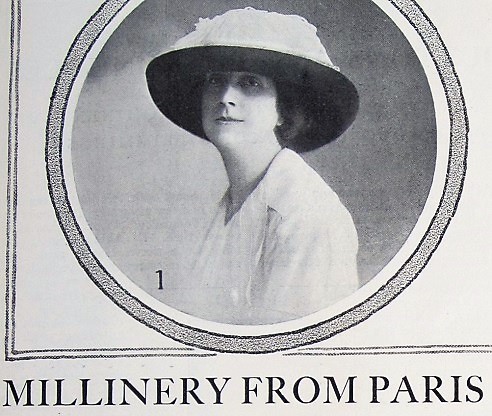 Hat from Lanvin, Delineator, Oct. 1912. “…Black velvet with a trimming of ‘Marquis’ feather.” 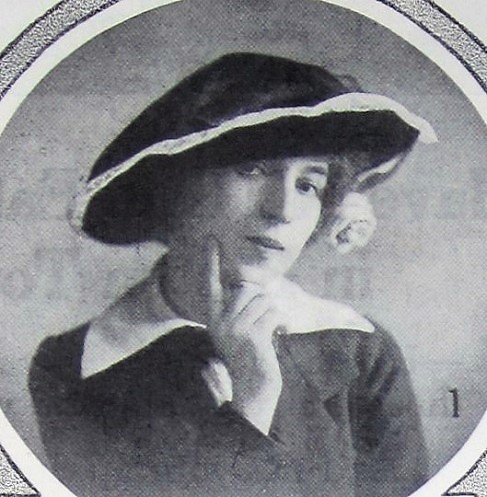 “Hat of black satin with real old lace border. Soft black satin crown and ‘Neron’ rose under the brim. By Suzanne Talbot. [It’s rather like a Tam o’ Shanter.]

Flowers or feathers worn under the brim instead of on top of it  could be very charming. 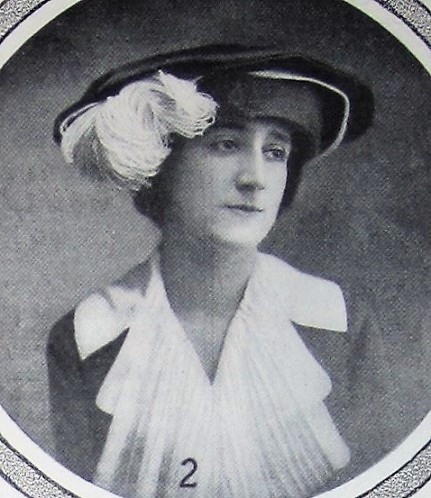 “Brim of black silk sponge tissue, with crown of black satin. White Prince of Wales feather at the right side. By Jeanne Lanvin.” Delineator, Oct. 1912, p. 272. 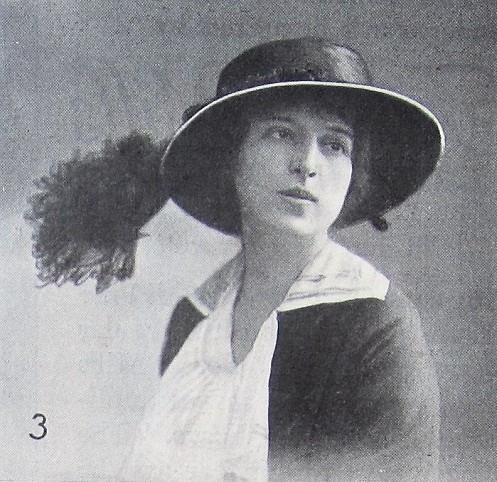 This relatively simple hat from Suzanne Talbot must have been very annoying to sit next to, or behind. “Panne velvet hat with a piping of white cloth and trimmed with two curled ostrich quills.”

If you weren’t attracted by extremely wide hats, extreme height was also an option:

“White plush hat with black satin brim rolled at the edge and trimmed with two raven’s quills in front. By Suzanne Talbot.” 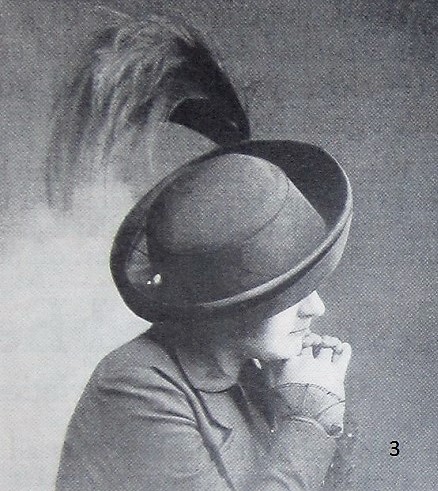 “Tailor-made hat of black satin with turned-back brim and shaped bands stitched with cords. By Georgette.” [To me, it looks like a shaped felt hat, but perhaps my photo program changed its texture.]

I do like the delicate sheer frill at her wrist, in contrast to her suit. All those photographs were taken by l’Atelier Taponier.

This hat from Doeuillet is another that must have required wearers to calculate the clearance on doorways and cabs very carefully. 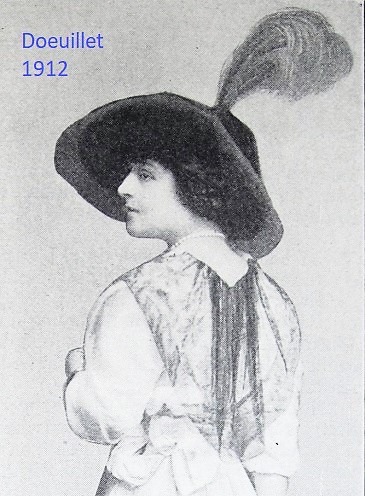 Naturally, the illustrators working for Butterick’s Delineator magazine tried to keep up with the latest hat styles. 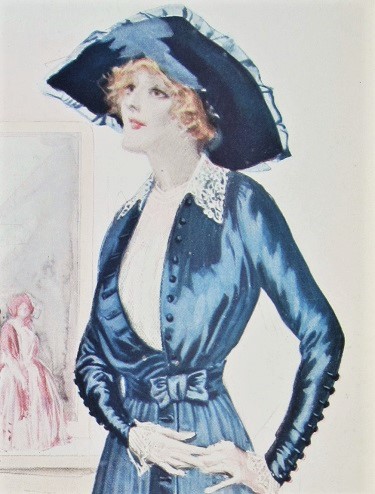 Hat with a sheer overlay, like many Paris hats shown in the same issue. Delineator, October 1912. 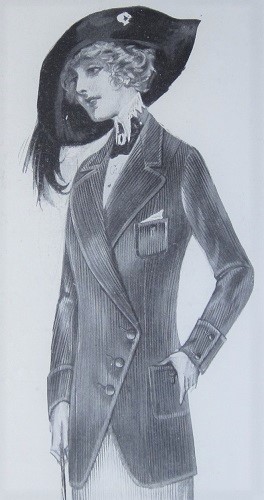 Wide hat with curved brim, drooping feather at one side; Delineator, Oct.1912. Her coat is corduroy. 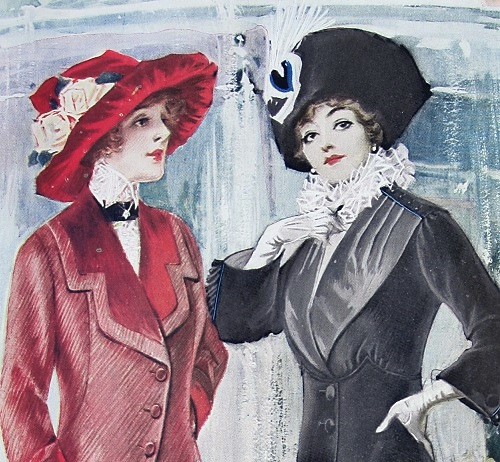 But the hat shown in the cover illustration for October 1912 was much simpler and smaller (and sportier) than the Paris hats inside the magazine. 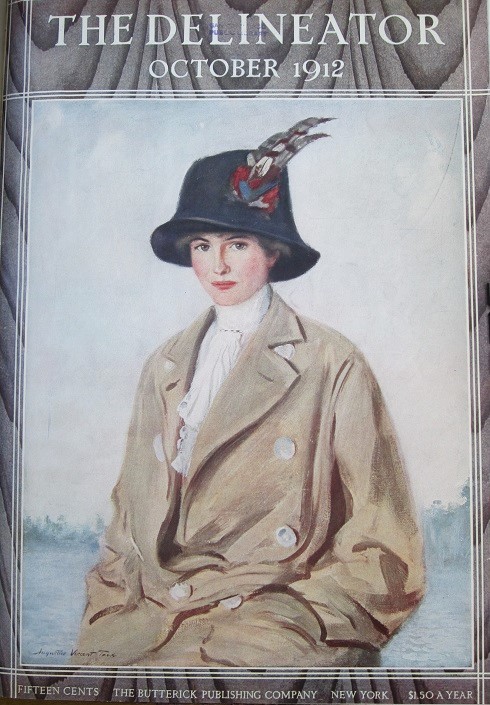 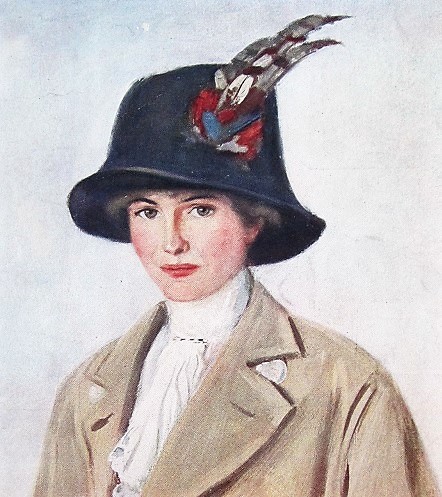 Edit 9/18/19 Here is a full length picture of the blue suit and hat from October pictured above: 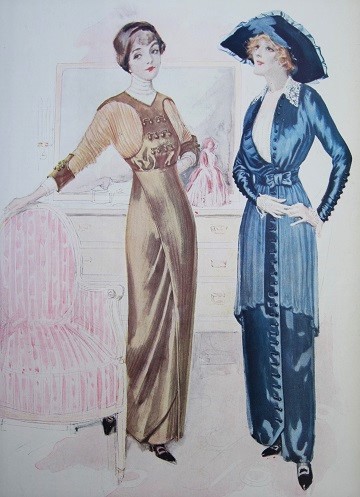