Although the face looks like a Shirley Temple Doll, this pattern said it was a for a “Movie doll.” McCall pattern 418, from a 1946 catalog, but probably issued years earlier.

Singing, dancing Shirley Temple was a big star (and a movie veteran) by the time she was eight.

Shirley Temple in an ad for the film Baby Take a Bow, 1934. She was five or six at this time.

You could get a free 13 inch Shirley Temple Doll by selling four subscriptions to Ladies’ Home Journal. Ad, January 1936, LHJ.

Shirley Temple dolls, made by Ideal, came in many sizes; after their successful debut in 1934, pattern companies wanted to cash in on their popularity by selling patterns for doll clothes that would fit the dolls, and which could be related to little Shirley’s movie roles. However, because of licensing agreements, most companies didn’t have the right to use the Shirley Temple name.

DuBarry doll wardrobe pattern 2144B, from 1939. Vintage doll enthusiasts usually refer to this as a Shirley Temple pattern — for obvious reasons.

This DuBarry pattern, which dates from 1939, shows dolls with the Shirley Temple face and hairstyle, but does not use her name.

The pattern was available in 6 sizes, depending on the height of the doll. Simplicity 2243 also said it would fit “popular film star dolls.” McCall 41435 from 1937 is usually described online as a Shirley Temple pattern, but those words aren’t used on the envelope.

McCall “Movie” doll pattern 525 had a hooded cape, as well as beach pajamas and hats.

Shirley Temple in Heidi, 1937. Her “peasant girl” movie dress laced up the front.

I love this beach pajama outfit; beside it is a photo of a little girl who lived next door to my grandmother.

McCall’s Movie doll pattern 525 for beach pajamas was the same design as a 1937 play outfit for girls in the CoPA collection; right, unidentified girl wearing a similarly bias-trimmed outfit. California circa 1930s.

Clothes for these dolls resembled real clothing for children, as seen in the dress, green coat and suit from McCall 418, below.

Part of McCall 418, “Movie” doll wardrobe; in December 1946 catalog, but the number sequence puts it earlier.

There’s no mistaking Shirley Temple’s face on this illustration. The detail of the clothes is amazing, considering that it was available for dolls as small as 13 inches (like the one offered by Ladies’ Home Journal.)

McCall offered the little Shirley Temple doll suit with plaid skirt in another version in pattern 1015, which does not have Shirley Temple’s face or curls:

Little girl in a suit similar to the Movie Doll patterns. Late 1940’s.

I also had to wear curls like Shirley’s, perfected with a curling iron heated on the gas stove; my mother and I fought about those curls every day. She had seen plenty of Shirley Temple movies before I was born and had a clear idea about what her daughter should look like.  (I try not to hold a grudge against Shirley.)

These wardrobes often included underwear, dresses, a coat or cape, and pajamas or a jumpsuit; the detailed robe in Butterick 449 delights me. 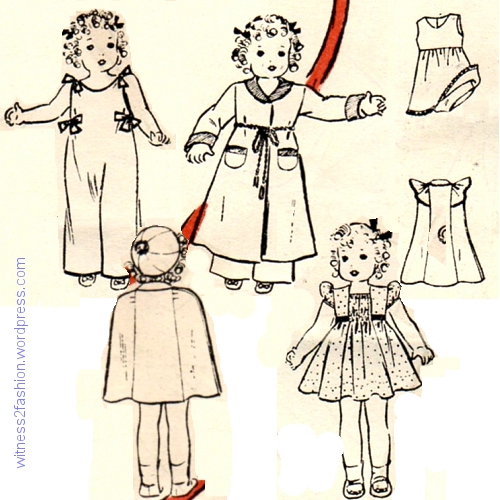 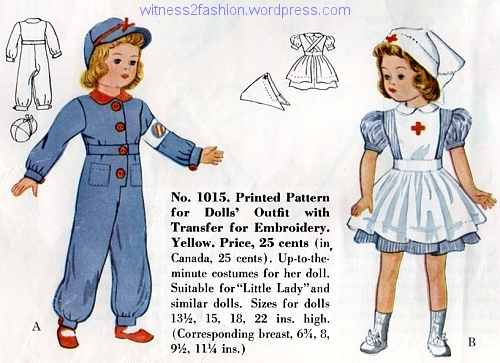 Detail from McCall 1015. A “siren suit” or coverall for wearing during air raids or war work, and a nurse’s uniform. Suitable for “Little Lady” and similar dolls, 13.5 to 22 inches high. 1946 catalog, but probably earlier; Little Lady dolls appeared in 1942.

Perhaps the movie inspiration for this one was Gone with the Wind (1939,) rather than Shirley Temple. 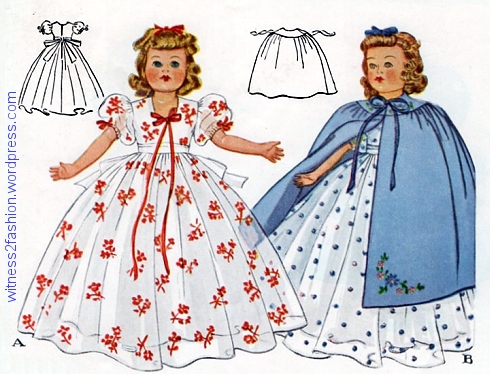 I especially like the doll’s “broomstick skirt,” a fad for women’s skirts that were twisted and tied around a broomstick while wet, so that they were random pleated when dry.

Allowing for the child-shape of the dolls, these mimicked women’s clothes. I remember my mother wearing a blue 1940’s housecoat very much like that one! 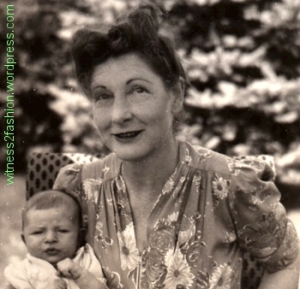 Shirley Temple’s heyday as a child star was in the mid 1930’s; although doll-buying parents might have fond memories of her as Dimples, The Little Colonel, Curly Top, and other roles she played before she was eleven, by 1947 she was a married woman, playing opposite Cary Grant and Myrna Loy in The Bachelor and the Bobby-Soxer.

Butterick doll wardrobe patterns 5969 and 5968. December 1951, Butterick Fashion News. Butterick 5969 was for the new “Toni” doll, which allowed you to wash and set her hair.

The Toni home permanent company realized (or hoped) that little girls might like to give their dolls a “Toni.” In fact, the setting lotion for the Toni dolls’ hair was sugar and water. I can say from my own childhood experience that my Toni doll’s hair developed a sort of sugar dandruff — luckily you could shampoo her hair, too.

However, Shirley Temple dolls did not disappear; in fact, perhaps because her old movies were appearing on television in the fifties, a new, improved Shirley Temple doll was released in 1958, and new doll wardrobe patterns for her — in fifties’ styles — quickly appeared.

Advance doll pattern 8813, released in 1958. From Blueprints of Fashion 1950s, by Wade Laboissionere.

The Advance company was licensed to sell Shirley Temple Doll patterns, but I suspect that other companies were able to work around that problem — again.

Unlike many child stars, Shirley Temple Black  led a happy and productive life “after Hollywood,” and served as a United States Ambassador to Ghana and Czechoslovakia.

Many of these movie doll patterns can be seen (or purchased) at Old Doll Patterns.