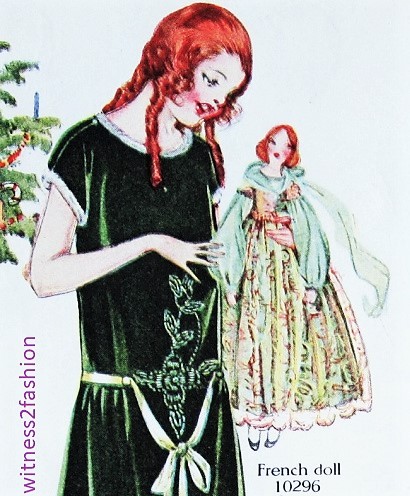 A young teen with a boudoir doll, December 1924. You could buy a pattern for the girl’s dress or a pattern for her “French doll’s” dress from Butterick.

Half of page 28, from Delineator magazine, December 1924. 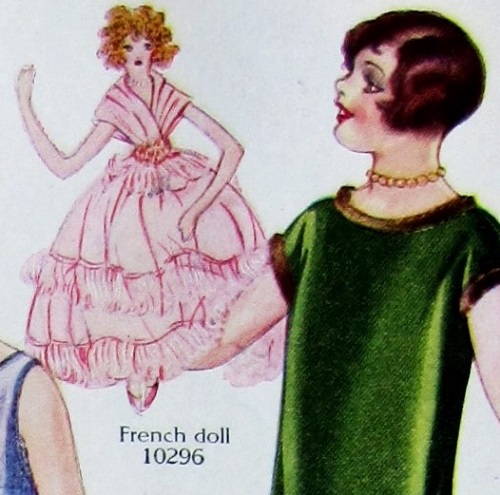 It may seem odd that doll patterns were so prominent with illustrations of patterns for girls 8 to 15 and “misses 15 to 20,” but Boudoir dolls were popular with grown women, too — my Aunt Dot still had one decorating her bedroom in the 1980s.

You could buy the heads for home-made boudoir dolls separately, and just make the doll’s body and clothing. I was surprised to see that the “French doll” pattern also included a Pierrot costume:

This exact pattern showed up for sale, so we know that it could be made with four different looks: 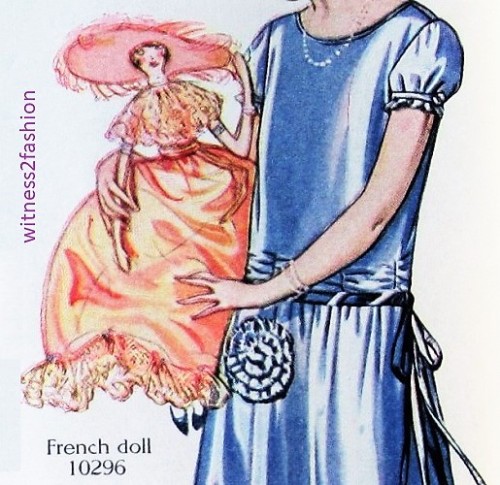 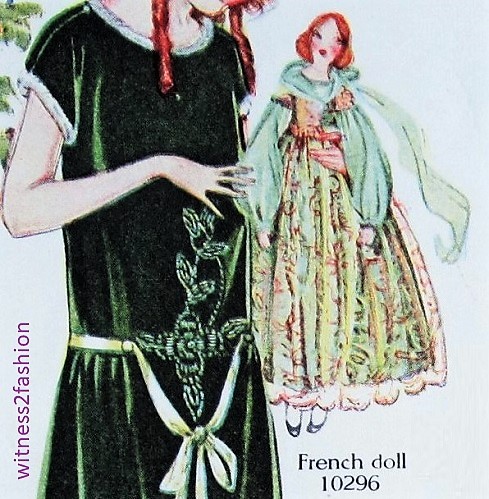 Doll pattern 10296 in a version with long, sheer sleeves.

Pierrot is also a French character…. Doll pattern 1026 in its fourth view.

So many doll patterns were illustrated on one page of the December issue that I have to divide them into more than one blog post. I couldn’t find the pattern description for doll 10296, but I did find one for this set of stuffed animal dolls:

The faces are embroidered onto the fabric of your choice. 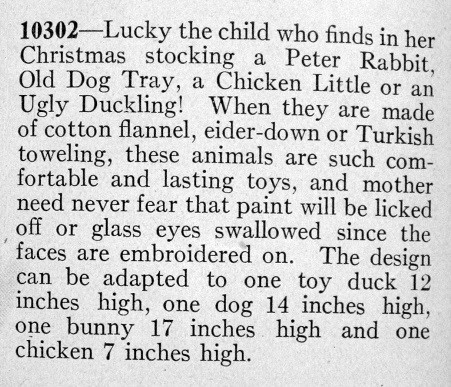 “Old Dog Tray” was the “ever-faithful” hero of a song by Stephen Foster; Peter Rabbit was the star of many Beatrix Potter stories. [Her Peter Rabbit wore a blue coat, so I guess the red vest on No. 10302 was easier to make and an attempt to avoid copyright infringement…. I was the kind of child who would have been silently disappointed that he didn’t look right.] It’s also confusing to me that the “Ugly Duckling” is a full grown duck, not a swan, while the fuzzy yellow chick gives new meaning to “Chicken Little.” (In my little 1940-ish book, Henny Penny was illustrated as an adult hen wearing a bonnet and shawl, but this earlier illustration sides with Butterick.)

Oh, Dear:  time for me to think about the dreaded Christmas shopping….