How to Look Thinner in the 1920s, Part 1: Wear a Corset or Corselette

In the July, 1925 issue of Delineator magazine – published by the Butterick Publishing Company — columnist Evelyn Dodge gave the following advice on looking slender while wearing 1920s fashions. I will divide it into three parts — proper corsets, proper lingerie, and proper sizing and styles. I have already exerpted part of her article in Underpinning the Twenties: Corsets and Corselets.  I will add illustrations from Delineator and other sources, and my own comments.

“My subject this morning, dear friends, I know you will find delightful. My text is ‘How you can reduce your hips three inches in three minutes without diet, drugs or exercise and still eat your way through June without giving up strawberry shortcake, asparagus, and any of the other pleasures of the season. . . .’

“I can’t tell you how you can become slender, but I can show you very easily how you can look several inches slighter and thirty or forty pounds lighter than you do now. Almost any woman can reduce her actual measurements appreciably by proper corseting, proper lingerie and the proper size clothes. Old shapeless corsets with bent and bulging bones, too much lingerie cut on too wide lines and made of clumsy materials, clothes that are too large, too long and too wide for the present fashion will make a mountain out of any feminine molehill.”

[Comment: As a costume designer, I could usually create the illusion that a 145 pound actress weighed 133 pounds (or that my 160 pound self weighed 10 pounds less), but erasing forty pounds is promising a lot! As an opera designer once told me, “You can create visual illusions with costumes — up to a point, but there’s only so much that vertical lines can do for a singer who’s built like a tugboat.” ] 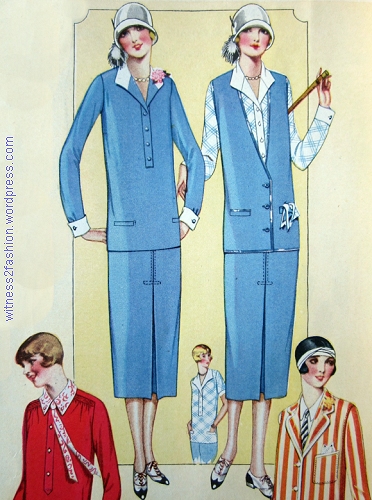 In 1925, when Evelyn Dodge wrote this article, she said, “The boyish figure sans bust and curves and waistline is the ideal silhouette.”

Tip Number One: Wear a Corset or a Corselette.

“A Few Years Ago Women Took Off Corsets . . . and Let Their Figures Go.” — Evelyn Dodge

Dodge attributed the change in women’s figures to the relatively shapeless styles of the preceding decade.

[I know that fans of Titanic and Downton Abbey may not believe that the styles of the late 1910s could be extremely unflattering; that’s because theatrical costume designers do a great deal of period research and then select the clothing that a modern audience will find most attractive.  If a woman is supposed to look young and appealing, or sophisticated and sexy, she has to be dressed in a way that conveys those character points to an audience that has not done months of period research.] Here are some outfits for women, circa 1917:

If you were an actress — whose next job might depend on being shapely — which would you prefer to wear?

Even outfits designed by Gabrielle Chanel could add pounds in 1916:

Under all that fabric, it would be easy to put on a few inches around the hips without even noticing. (Weighing yourself at home was not an option when scales were huge, heavy machines.)

Then came the 1920s, when the ideal figure was flat in front and flat behind. 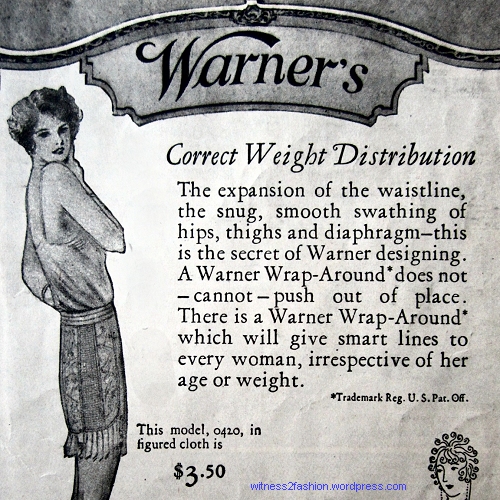 Young Women Wearing Fashionable Sweaters, California, 1917-1918. Note how similar their sweaters are to the ones in the catalogs, below.

“A few years ago during the vogue of the sweater with its concealing lines, women took off corsets, drew a long breath and let their figures go.

Sweaters from Sears catalog, 1922. From Everyday Fashions of the Twenties, by Stella Blum. Please do not copy this image.

“Some of the results were good, others were bad. The large waist and the resulting lowering of the bust and straightening of the hip has a youthful air.  [!]  But the diaphragm bulge, the middle-aged spread, the very pronounced increase in weight, have proved ugly and stubborn.

Models Photographed for Ads in Delineator, 1917. Their figures would be out of fashion in the nineteen twenties. Imagine the woman on the left in a 1920s dress.

“Many women who have tried going without corsets are now wearing them again – not to make their waists smaller, but to flatten the abdomen and lower back.” 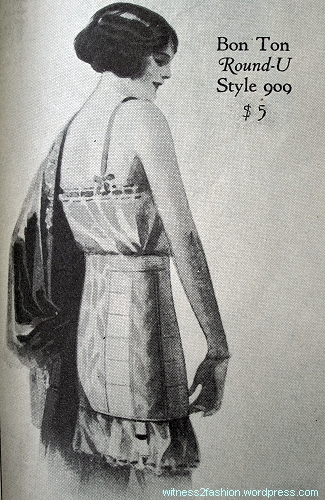 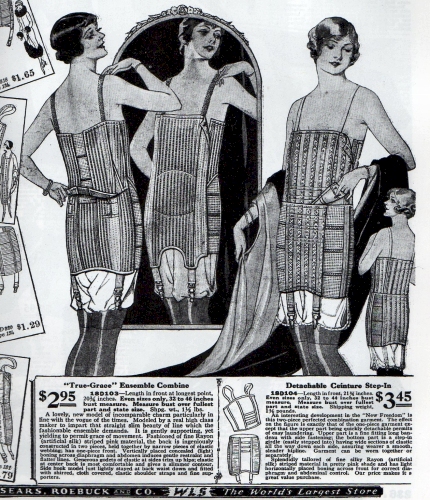 Corsets from Sears catalog, 1925-26. From Everyday Fashions of the Twenties, by Stella Blum. Please do not copy this image.

Many women wore a Brassiere or Bandeau to compress their breasts, plus a corset to control their hips and abdomen. (See the “Detachable Ceinture Step-in,” above.) This could leave an uncomfortable and unsightly ridge of flesh bulging out where the brassiere and corset met, so the Brassiere + Girdle combination — also called a corselette — became very popular:

Treo “Brassiere Girdle combination garment” ad from Delineator, May 1925. This could also be called a corselette or corsette.

Dodge explains: “Most young girls and practically all women need some sort of figure control . . . . Not all women need corsets. Women with young slender figures find that the corselet, which is a combination brassiere and hip-confiner, is sufficient.”

The boneless corselet (spelled many ways) would have acted on a woman’s body the way that sausage casing acts on sausage, redistributing her flesh into a tube shape.  Although it had no metal boning, this corselette’s vertical flat-felled seams pass over the bust points, effectively flattening the breasts. Tension between the shoulder straps and the stocking garters would finish the job. (For more information about corsets and corselets, click here. For more information about 1920s bust flatteners, click here.)

Coming Soon: How to Look Thinner in the 1920s, Part 2: Wear the Right Lingerie