I’ve often mentioned the book Uplift: The Bra in America, by Jane Farrell-Beck and Colleen Gau. It’s scholarly but also very readable, and packed with related information on women’s lives. It feeds my interest in old advertisements, too — I’ll be sharing a small selection of underwear ads and patterns from the 1920’s and 1930’s in several posts.

Note: This post is not an authoritative history of the brassiere; for that, please consult both Uplift and Fashion in Underwear by Elizabeth Ewing. The topic is so complicated that the Wikipedia entry warns of contradictions.

I’m indebted to the authors of Uplift for this concept:

For hundreds of years, women’s breasts were supported by corsets, which pushed them up from below. The innovation of the twentieth century was “uplift” — shoulder straps which supported the weight of the breasts from the shoulder instead of pushing them up from beneath. 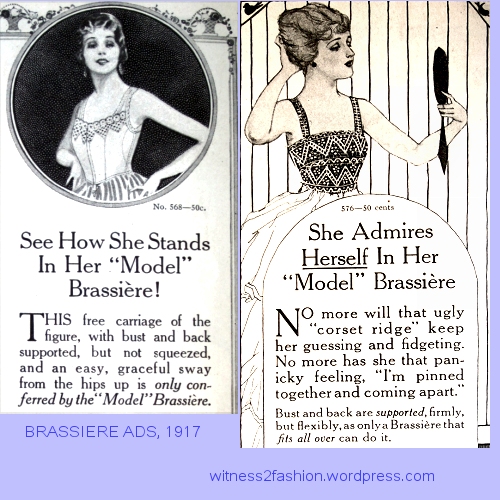 At the beginning of the 20th century, fashion was still in the “monobosom” or “unibosom” era.

Brassieres with rust-proof boning from the Sears Spring catalog, 1917.

Corset boning probably ran up the center of these brassieres and also over the breasts to create a smooth bulge without any breast separation. “By 1917 brassieres [like those above] had moved from a minority fashion to the mainstream of womenswear.” Uplift, p. 33.

The tubular, boyish ideal of the early 1920’s led to a brief fashion for flattening the breasts. See Underpinning the 1920s: Brassieres, Bandeaux, and Bust Flatteners. There was even a brassiere company called “Boyshform,” (boyish form) and another called “Flatter-U.” 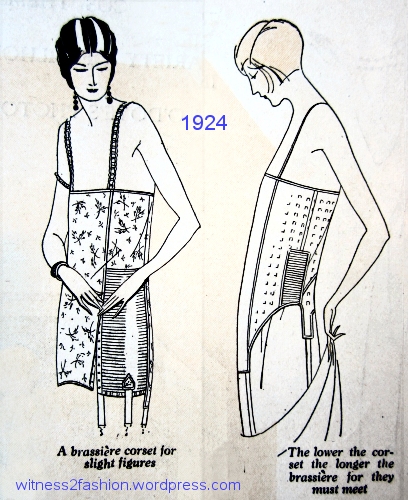 When young women stopped wearing restrictive underwear in the 1920’s and allowed two separate breasts to be discerned, those with youthful figures might wear an unstructured brassiere primarily to prevent their nipples from showing through the lightweight dress fabrics that were popular.

1924: a brassiere and step-in pattern, Butterick No. 7080. Delineator, September issue.

For me, there are two interesting things about this pattern. 1) This 1926 brassiere is definitely divided into two separate pockets (The phrase “bra cup” had not yet been invented.) It is not meant to flatten the bust. 2) It appeared on the same page as this pattern — No. 6964 — for two bust-flattening brassieres:

1926 brassiere patterns from Butterick. At top, two bust flatteners, pattern 6964. At bottom right, pattern 6961 for a brassiere that separates and does not flatten the breasts. Delineator, July 1926, p. 38.