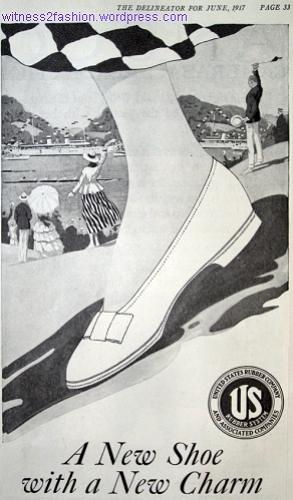 Keds rubber-soled shoes were introduced in 1916 (according to Wikipedia), a product of the United States Rubber Company. I have not searched through magazines from 1916, but this ad from June 1917 implies that this particular Ked shoe is a new style, “A New Shoe with a New Charm.” An ad from the following month makes a pun about this model: “Keds Make Their First Bow to You.” Obviously, these are not the high-topped sneakers that were the first Keds produced. These rubber-soled flats, with their squared bow on the toe, look amazingly modern compared to other women’s shoes from 1917:

Women’s Shoes for April, 1917. From an article in Delineator magazine.

Here is the text from the June Keds advertisement pictured above: 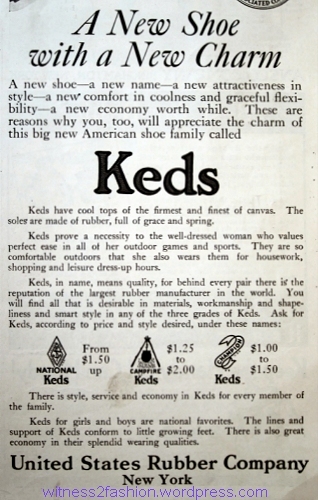 “A new shoe — a new name — a new attractiveness in style — a new comfort in  coolness and graceful flexibility — a new economy worth while. These are reasons why you, too, will appreciate the charm of this big new American shoe family called Keds.

“Keds have cool tops of the firmest and finest of canvas. The soles are made of rubber, full of grace and spring.

“Keds prove a necessity to the well-dressed woman who values perfect ease in all of her outdoor games and sports. They are so comfortable outdoors that she also wears them for housework, shopping, and leisure dress-up hours. Keds, in name, means quality, for behind every pair there is the reputation of the largest rubber manufacturer in the world. You will find all that is desirable in materials, workmanship and shapeliness and smart style in any of the three grades of Keds. Ask for Keds according to price and style desired under these names:

“There is style, service and economy in Keds for every member of the family.

“Keds for girls and boys are national favorites. The lines and support of Keds conform to little growing feet. There is also great economy in their splendid wearing qualities.”

Keds Advertisement for July 1917; it appeared in both Delineator and Ladies’ Home Journal.

This full page ad — “Keds Make Their First Bow to You” —  appeared in the July edition of the women’s magazines Delineator and Ladies’ Home Journal.  “They bow to you — discriminatingly well-dressed American woman!”

“Keds for you will cover all daytime occasions — home wear; golf, tennis and all other outdoor games; for ordinary walking or longer ‘hikes’; for yachting and riding wear; and plenty of other styles just as perfectly suitable for wear with morning frocks and daintiest house gowns, at home or on the country-club porch.

“She travels many miles a day — the woman going about her household duties; but she is perfectly content to walk on that journey of loving service when she wears a shoe as pretty as it is comfortable….”

I’m not sure whether the July 1917 shoe is the same as the June one, or if the July shoe actually had thin black piping as drawn. The illustrations also have different skirts and different backgrounds — a boat race in June, a beach scene in July.

Take another look at that classic, slip-on shoe; it’s 97 years old this month.