Vanilla lace Chanel gown worn with a bow pin at the shoulder. Delineator, May 1927. The illustrator is probably Desvignes.

In 1928, writer Marie Beynon Ray devoted an article to the appearance of designer jewelry sold by the top couture houses. 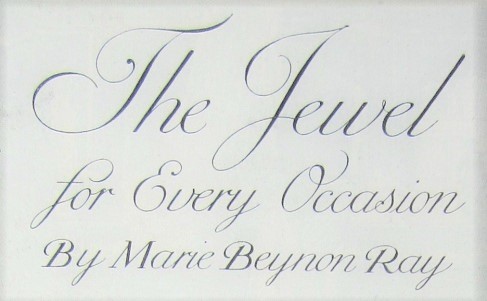 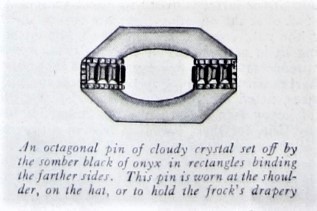 “Pin of cloudy crystal set off by the somber black of onyx in rectangles binding the farther sides. The pin is worn at the shoulder, on the hat, or to hold the frock’s drapery.” Delineator, April 1928, page 35.

A set of cut crystal necklaces in several lengths and a matching group of bracelets. Delineator, April 1928.

The change was not only that couturiers were branching out into a new field (they had already discovered how lucrative their own perfume labels could be) but also that non-precious jewelry was suddenly chic: “a yard of so of ’emeralds’ of a size they never could be, or a half yard of ‘diamond’ bracelets up the arm….” 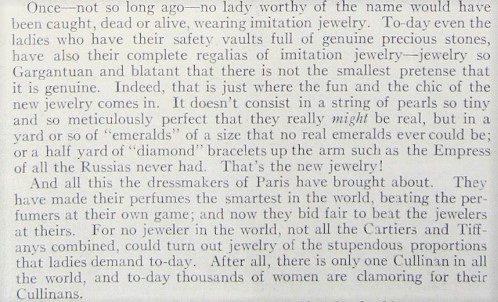 “Once — not so long ago —  no lady worthy of the name would have been caught, dead or alive, wearing imitation jewelry…. jewelry so Gargantuan and blatant that there is not the smallest pretense that it is genuine…. And all this the dressmakers of Paris have brought about.” [Semi-precious stones like rock crystal were replacing diamonds and real pearls, as rhinestones, “paste” or “Strass” jewels, glass pearls, and cut glass jewels became chic instead of shameful.] Big artificial pearls were replacing “the string of pearls so tiny and so meticulously perfect that they might be real.” “No jeweler in the world, not all the Cartiers and Tiffanys combined, could turn out jewelry of the stupendous proportions that ladies demand today.” [That image of Chanel wearing lots of fake pearls is not from the Twenties, but the same site says she “opened her own jewelry workshop” in 1924 and introduced diamond paste jewelry — i.e., fake diamonds — in 1928.]

The shoulder pin is rock crystal with a “star” design shining up through it. The bracelet is made of rectangular crystals (not diamonds.)

It looks to be “expansible.” ( JewelryPatents.com is a very helpful site!)

Art Moderne geometry in a rhinestone buckle and an oblong crystal pin. [Crystal may mean “glass,” as in “Swarovski crystal” or “Czech crystal.”] 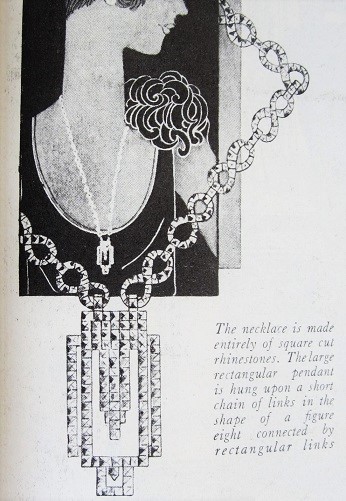 Square-cut rhinestones on the links and the pendant of a necklace. Delineator, April 1928. (That’s a chenille pom-pom on her shoulder.)

“But what have the dressmakers to do with jewelry?… they have found that everything that a woman puts on her body, while she is wearing one of their gowns, enormously affects the chic of the gown…. And now, when she buys her dress, she buys, at the same time and place, the jewels that complete it.”

“Since the dressmakers have thus summarily taken the designing of jewelry into their own hands, two expected developments have taken place: first, the jewels bear a much closer relation to the gown than formerly; and second, they are not genuine.” 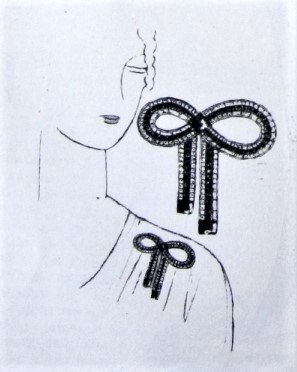 This shoulder pin in the shape of a bow was a featured accessory in March 1927. Delineator, p. 16.

This “bow” necklace and bracelet in gold were designed by Premet.

“Metal jewelry may be worn with sport clothes.”

Costume jewelry — not from couture designers — was affordable. My mother (b. 1904) worked as a secretary, but she was able to afford a set of three, large  graduated crystal necklaces like these:

She also owned some pins like this Art Deco clip (which I wear, sometimes:) 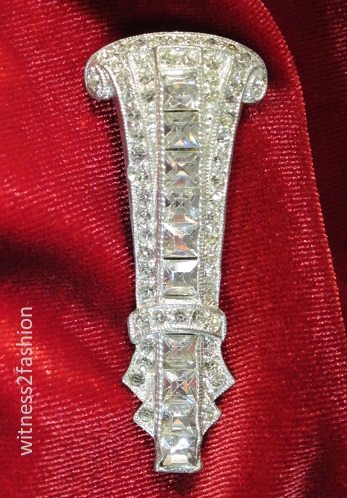 It has a patent number, but I haven’t been able to identify or date it. It’s a rather impressive size — over two inches long:

My mother and I didn’t see eye-to-eye on many things, but in this case… Thanks!