By 1914, skirts might have very narrow hems of 44 or 45 inches — (Lay that out in a circle with a tape measure and imagine walking with that restriction on your ankles.) Some skirts had slits or a curved hem to permit a natural stride.

A peg-topped pannier skirt pattern from April 1914. Hems were narrow, and feet and stockings peeping out from them could be sexy. Butterick skirt pattern 6736.

Feet — and stockings — could be a focal point. It’s no surprise that stockings and shoes got more attention.

Parisian stockings, April 1914. All three have lace inserts. The lace on the right has a pattern of birds flying. Sold by La Maison Chatelet, Paris. 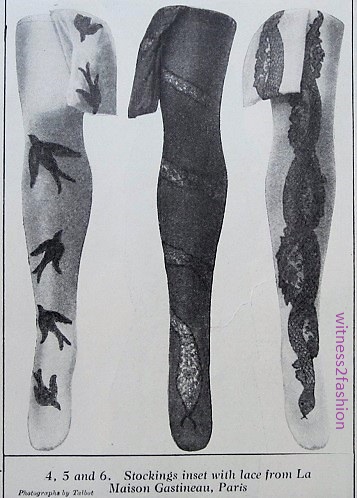 Swallows fly across the leg on the left. White silk stockings might have black lace inserts, like that on the right. A serpent snakes its way around the leg in the center. Hosiery from La Maison Gastineau, Paris.

Delineator magazine, which had offices in Paris and London as well as New York City, reported on couture designs  every month and aimed at an upper-middle-class reader. But it’s hard to imagine those snake stockings on the wife of a small-town American businessman or politician!

This was also an era of fabulous shoe buckles. (They clipped on to evening pumps and were purely decorative.) I inherited this pair of shoe clips from my aunt (and sold them!)

A pair of rhinestone or paste shoe buckles, probably World War I era or slightly later. Each was about two inches wide. 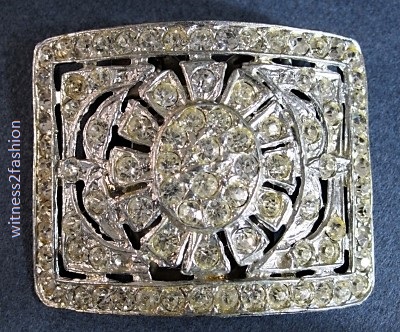 A lower-middle-class woman owned these beautiful shoe clips. Did she wear them often? Perhaps she wore them to formal events given by the Masons or the Eastern Star — she and her husband were members.

This photo of the backs shows the sliding fastener that clipped the buckle to the shoe. 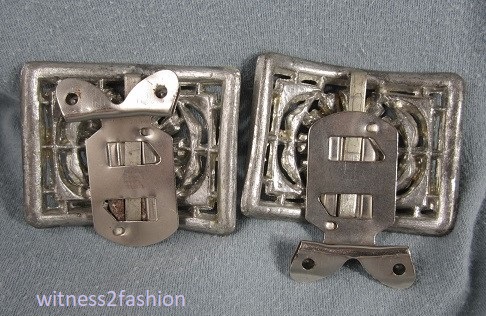 A patented sliding device allowed you to use the clips on many different pairs of shoes.

As shown in these photos from Delineator, shoe clips could take many forms, even an owl, or a butterfly. 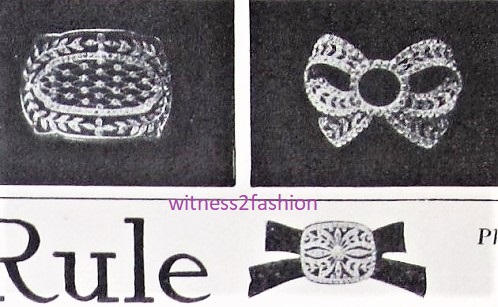 A shoe clip might be an abstract shape or a bow… 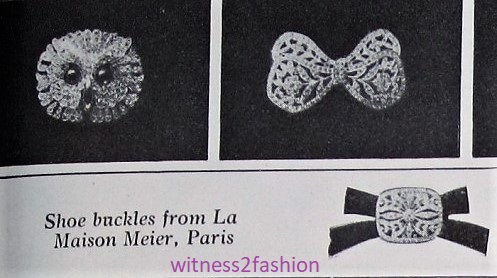 An owl’s face, and a different bow …. The clip at bottom right reminds us that a ribbon bow could match your shoes to your outfit.

These shoe clips show a traditional buckle shape, left, and a jeweled insect.

Evening shoes from Paris, April 1914. Delineator. Two of these shoes are shown with shoe clips. The one at top left is also trimmed with lace. The one at bottom left is “plain satin.”

The embroidered shoe at the right, with straps that extend up the ankle, is a “cothurne” or “tango slipper.”  The straps keep it from flying off if you kick up your heels during the dance.

Another 1914 cothurne or tango slipper.

A lace-up shoe called the cothurnus was worn by the ancient Greeks and especially by actors performing while wearing masks. The built-up sole of the performers’ cothurni added to the stature of actors, making them appear larger than ordinary humans. 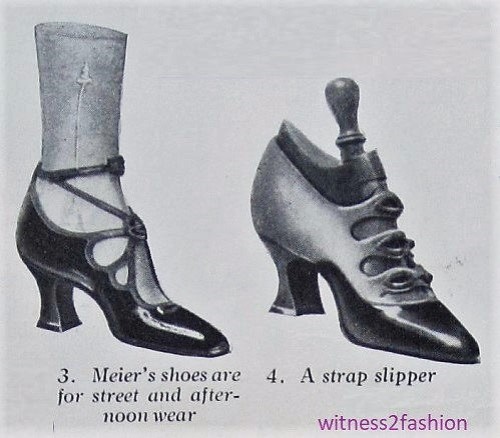 Shoes suitable for day or afternoon wear. April, 1914. (I think the stocking at left has a decorative “clock,” not a run.)

The dance called the tango was just becoming popular, along with the afternoon dance, called the “thé dansant” in French. (I just read an article about them in Delineator, May 1914 — written by Irene Castle.)