NOTE: I thought this post was published on Sept. 16, 2017; I even received helpful  comments and updated it — but it’s not listed as published on my dashboard — so, forgive me if you received two notifications on it. Mysterious, indeed. I added links and categories in October, 2017.

This corset is stiffened by many rows of parallel channels. A busk can be inserted in the center. Parallel rows of diagonal cording flatten the midriff, which, to me,  suggests a date after the 1810s.

When I first saw this corset in a collection that was being readied for sale, I was fascinated by its beauty and its fine state of preservation. At first, I couldn’t believe it was not a reproduction. 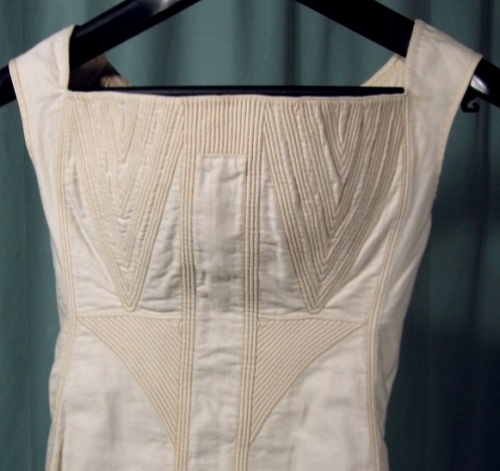 I couldn’t believe my eyes, so I took a few quick photos and sought advice, but the collection was sold before I realized that I needed more pictures. I can’t even find detailed notes — just the letter I wrote asking for advice — so apparently I never had a chance to return to this garment, or to photograph several other intriguing corsets. 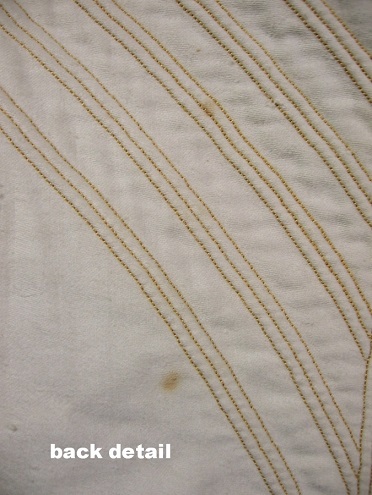 Back detail of the corset near shoulder.

I believe it was completely hand stitched with shiny brown thread. The stitching is so regular that it looks, at first, like it was done by a machine; however, I believe it is perfectly spaced back-stitching, with visible starts, stops, and knots on the inside of the corset. [Update: it is not back-stitched; Cynthia Baxter suggested that is was stitched with a running stitch, and then stitched on the opposite side with running stitches using the same holes. I have seen this technique used by shoemakers and leather workers, so it makes sense for a corset.]

Inside of the corset. An occasional thread knot implies hand stitching.

The state of the fabric, except for a few spots, was remarkable — if it is as old as I think it is (before 1840.)  It could have been collected anywhere.

Channel stitching, detail of right midriff front. The busk channel is at right of photo.

Detail of front of corset.  The midriff area is stitched from below the bust to just below the natural waist. I think the channels hold cording.  I do wish I’d had time  to photograph the inside!

The corset has a dropped shoulder in the back, tiny close-fitting bound armholes, and an extended shoulder line.

An early 19th century dress from the same collection as the mystery corset. The chemise under it is unrelated. 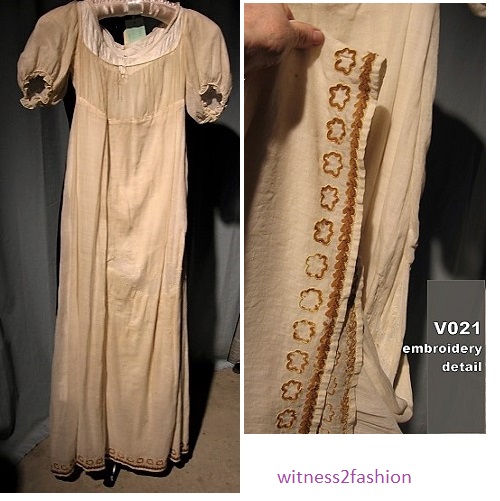 The corset worn under a dress like this created a very high bust, but a woman’s waist and hips didn’t need to be re-shaped.

Back to the mystery corset: I only took one photo of the back, with a gigantic, modern black lace obscuring the eyelets.

Back of corset, with a modern black shoelace holding it closed.

I looked online for Regency Era reproduction patterns; I didn’t find any pattern for this corset. A yahoo search turns up several images of Regency Era corsets. Click here.

A Regency style corset made by sidneyeileen.com has similarities to our mystery corset.

A corset (1830 to 1840) in the Los Angeles County Museum has a similar high waisted (but not Empire) silhouette.

This corded corset, with a channel for a front busk, is at the Metropolitan Museum: it is described as 1820’s. The waist is a little above the wearer’s natural waist. The front straps are spaced as far apart as possible. 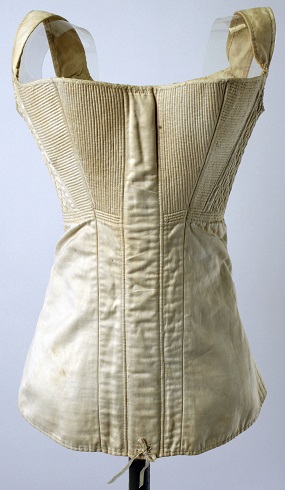 Corset from the 1820’s in the collection of the Metropolitan Museum.

I was going to leave it at that, but couldn’t resist trying to relate the shape of the corset to the clothing that would have been worn over it.

All the following fashion plates are from the online Casey Collection of Fashion Plates at the Los Angeles County Museum.

1800 fashion plate from Ladies’ Museum, in the Casey Collection. The early 1800’s corset pushes the breasts up to a rather unnatural position, high on the chest.

The neckline of our corset is too high for these fashions — and it does not push the breasts up this high.

Early in the 1800’s, the Empire waist was very high and the dress was often gathered in the front. The fullness moved to the back a few years later, which would call for a smoother midriff area. By 1811, the waist was moving lower:

However, not every woman immediately adopted the lower waist, as this mourning evening dress from 1818 shows:

Evening dress for a woman in mourning, 1818. From British Ladies’ Magazine, December 1818. in Casey Collection.

The mourning dress and the Parisian evening dress below might have been seen at the same ball, although one has a much lower waist.

A high bust and a descending waist line, from La Belle Assemblee, January 1820.

These dresses from 1822 show a high bust with a lower, fitted waist, which is still above the natural waistline. 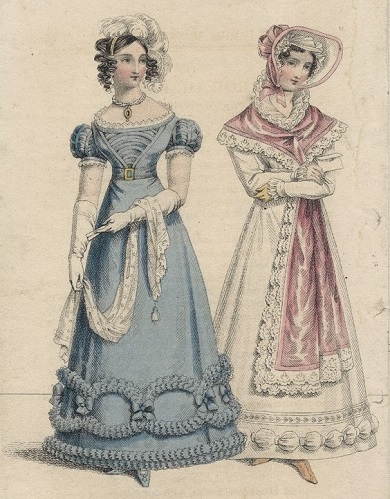 1822: a plate from the Ladies’ Monthly Museum, October 1822. Casey Collection. The shape of the midriff is becoming important, no longer concealed by fullness in the dress.

Bodices from La Belle Assemblee, December 1822. Casey Collection. The trend for wider shoulders and a narrow below-the-bust area is beginning. Belts accent the waist, which is still higher than nature designed.

Fashion plates from 1825 show higher necklines and lower waists, with a widening (and highly decorated) hem. 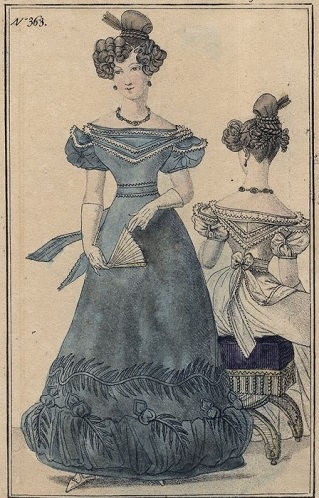 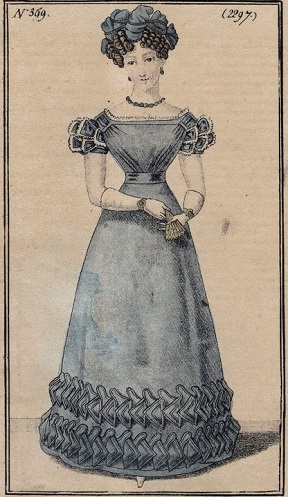 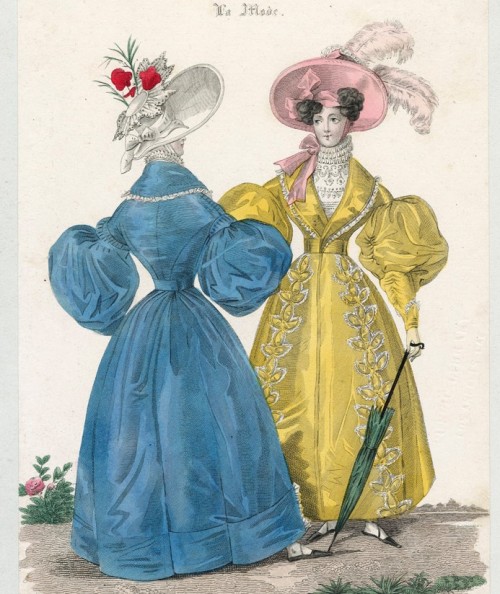 April 1830, La Mode. Sleeves are enormous, the shoulder is widened and extended over the upper arm; a woman is wider everywhere — except her waist. Casey Collection.

So:  where does our mystery corset belong?

Back of corset, with a modern black shoelace holding it closed. Notice the line of the shoulders.

I can imagine it being worn under this dress — but that’s only my guess.