The Power of Golf in Advertisements, 1924

“What Makes a Sportswoman?” Article Illustration, Delineator, May 1924.

Advertisers still try to link their products with a desirable life-style, preferably a few rungs higher on the economic ladder than their target audience. In 1924, golf was the sport that meant “middle to upper-middle class.” (The association of golf courses with country clubs and gated communities is still strong.) All of these illustrations appeared in Delineator magazine in 1924. In the September issue alone, golf was used to sell: 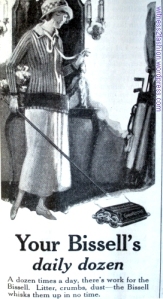 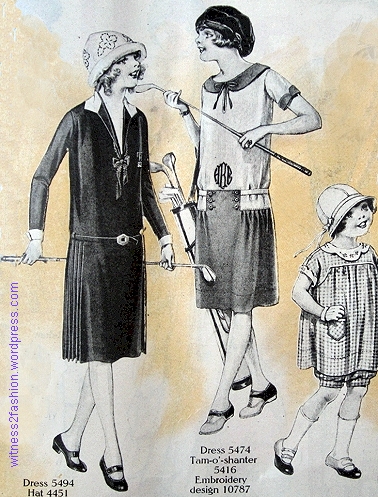 In August, golf was used to sell:

In June, the Butterick Pattern Company suggested that a golfing outfit should be part of your trousseau:

From a page of suggested patterns to make for your trousseau and honeymoon, Delineator, June 1924

and that girls aged 8 to 15 were also likely to be playing golf.

A Closer Look at Some of These Ads

The ad for Ab-Scent deodorant is actually aimed at men, but different “embarrassment” stories appeared in their other ads. In August, this unhappy young woman was “shunned” at the tennis club.

Both ads are interesting because they give us a view of typical sports clothes, including shoes.

From an Ab-Scent deodorant ad, September 1924. Note his cufflinks and bow tie.

It’s a relief to see that at least one of the women golfers is wearing very flat-heeled shoes; imagine playing golf or lawn tennis with your heels sinking into the grass.

This illustration comes from a full-page advertisement that told a rather lengthy story about woman who had jeopardized her husband’s career by playing golf in uncomfortable shoes.

Before her marriage, she was a champion golfer (always wearing Arch Preserver shoes), but she had stopped playing while her children were young.  Her husband comes home one day and says, “What do you think, little wife, the boss came in today and asked if I played golf….  Then he asked whether you played. I told him plenty about your playing. I told him –” The result was that the boss invited the young couple to play golf with him and his wife. The young wife “started out dashingly, driving a full two hundred yards from the first tee….” But she eventually felt so much pain in her feet that she had to  “hobble over the last few holes. She paid dearly for her ‘bargain’ shoes…. ‘I can’t help but worry,’ she tells her husband. ‘That game meant so much to you in business…. I know you’ll hate me, but I did the silliest thing. I thought I’d save some money by buying shoes at a sale.’ ” A few weeks later they played another game with her husband’s employer and his wife, who says, “Why, what in the world has happened to you? I never saw such a difference in anyone’s playing!” After the ‘little wife’ gives her a whole paragraph explaining the benefits of her new Arch Preserver Shoes, the boss’s wife says, “Do you know, that’s the very kind of shoe I’m wearing”– neatly reinforcing the class aspect of the product.

To my surprise, these are the shoes illustrated in this advertisement:

Selby Arch Preserver Shoes featured with the article about wearing them for golf. Sept. 1924.

The boss’s wife, seated in the illustration, seems to be wearing either the lace-up shoe No. 678 or the flat oxford shown at the bottom. But the ‘little wife’ is wearing very fashionable Arch Preserver shoes with a broad strap.

Sweeping Your Carpet while Dressed for Golf

I don’t for a moment suppose that any women did their housework dressed like this, hat and all. [We had a Bissell carpet sweeper like this one when I was a child. It wasn’t electric; as you pushed it, the round bristles swept the dirt into a trap in the machine, avoiding the need for a dustpan.]

The text of the ad doesn’t mention golf at all.  The idea is that you will save so much time with the Bissell sweeper that you’ll be able to play golf all afternoon instead of cleaning. And the sweeper is good for picking up last-minute spills, so you can grab your clubs and head for the country club.

I do like her striped sweater and the checker board band on her hat. She seems to be wearing a pleated skirt like the women golfers in this Ab-Scent ad.

Only the sportswoman pictured in the illustration at the top of this post is wearing golf knickers.  It is an illustration for an article, not an ad. Advertisers would avoid any clothing that might be considered controversial, such as a woman wearing ‘men’s’ clothing. The woman golfer in this Gossard corset ad is also wearing a pleated, buttoned skirt with her striped sweater:

This 1924 ad is really ahead of its time. The model has a well-defined, natural waist [!] accentuated by a belt, and an equally natural bust, styles which were not widely adopted until the end of the decade. By 1926, some women were beginning to replace breast-flattening bandeaux and brassieres with bras that had a gathered center front, acknowledging, for the first time in years, that women naturally have two breasts, not a mono-bosom. The name “Maiden Form” — as opposed to Boyshform, makers of the Boyshform binder — was registered as a trademark in 1924, the date of this ad, but bras that separated and lifted the bust first appeared in advertisements a couple of years later. (See Uplift: The Bra in America, p. 41) I do wish this 1924 ad from Gossard had shown the underwear this young lady was wearing!