“My husband is out of employment and has been for some time…. Our savings are gradually disappearing, and I am so helpless. I don’t know a thing I can do to earn money….” The Woman’s Home Companion invited her to sell magazine subscriptions.

One of the fascinations of vintage women’s magazines is their “time capsule” quality. While reading through them for fashion information, I can’t resist the advertisements, which give me a idea of the era’s preoccupations (zeitgeist is the correct word, I suppose.) What was new — from zippers to steam irons? What did advertisers want people to worry about, from halitosis and pyorrhea to underarm hair? In the Thirties, massive male unemployment found many women desperate to help support their families.

Women’s magazines had many such ads, promising that women could make money at home — “no experience needed.” Ad from Delineator, February 1931.

Before color photography was widespread, black and white photos were hand tinted — “We instruct you by our new simple Photo-Color process and supply you with work.”  Coloring printed images was already “women’s work.” In the 19th century, some women had earned money by hand-painting fashion plates with watercolor.

I realize that researchers tend to notice what they expect to find, so it’s not surprising that, as the child of people who married in 1933 — in the heart of the Great Depression — I noticed these little ads crowded into the backs of magazines.

A few ads from the back of Delineator magazine, October 1931.

Here is a selection of ads which promised women that they could earn money at home, with no experience or skills. Some of them were probably preying on the desperate — but perhaps I’m just cynical….

Top of an ad for Brown Bobbys, Delineator, February 1931.

Text of Brown Bobby ad, February 1931. Brown Bobbys were doughnuts. I suspect that the Food Machine Display Corp. was willing to sell families the equipment for a home doughnut business.

Women might also try to start a candy business….

Open your own candy business? “Making and sales equipment furnished.”  Delineator, February 1933. The American School of Home Economics was already publishing home economics study courses and books in the 1920’s, including Cooking for profit: catering and food service management.

“Women — Sell Fashion Frocks…. Earn up to $22 a week and get all your own dresses without a penny of cost.” Ad from Delineator, April 1936.

“Do  you want to make money? … Sell Fashion Frocks.” Ad from WHC, March 1937. “We are appointing a few more ambitious women to act as our representatives.”

[I don’t think it would be easy to sell dresses or anything else to your friends and relatives if you were all equally broke….]

October, 1934; Delineator. “Start earning at once. Thousands of prospects near you.” General Card Co., Chicago. 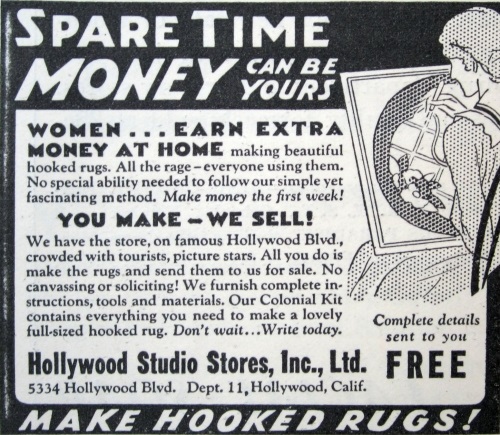 Fireside Industries said there was a market for hand-painted decorative items:

“Make extra money at once” — after you learn to “decorate clever art gifts at big profit per piece. No experience needed … No tedious study… You don’t even have to leave the house.” October 1931, Delineator. Fireside Industries ad.

Fireside Industries ad, March 1935. Delineator. “Everything furnished including supply of Novelties, for you to decorate and Homecrafters outfit.” “Openings in every locality.” “FIRST LESSON FREE.” [And then?]

Selling greeting cards, stationery, and especially Christmas cards, was advertised as a way to make money.

The words “Earn,” “Easy,” and “Extra Money” appear again and again, often with the promise that women can work from home.. 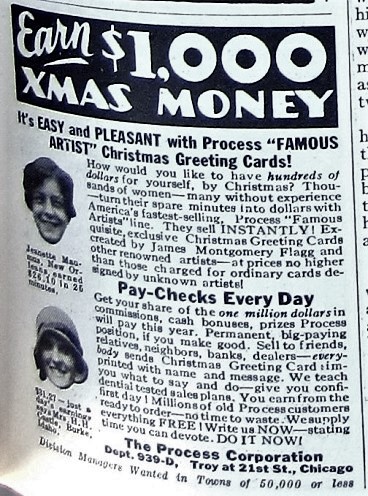 Process Corporation ad, August 1931. ” Thousands of women — many without experience — turn their spare minutes into dollars…. Permanent, big-paying position, if you make good.” 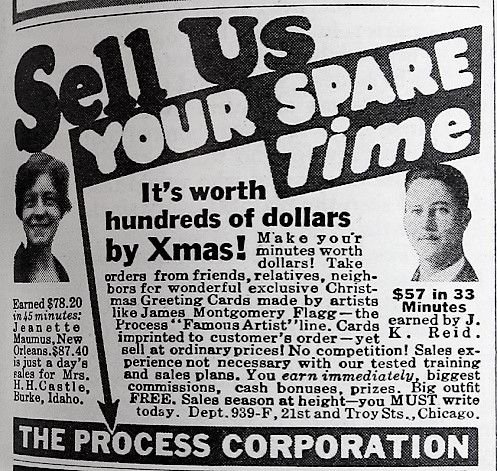 Janes Art Studio ad for card sellers. Sept. 1934. This ad admits that the pay is on commission — which makes Mrs. H.H. Castle’s $87 in sales look a little less lucrative.

From my own experience in door-to-door sales, sometimes you have to sell a “quota” amount before you qualify for the commission. In 1967, if I didn’t sell enough children’s encyclopedias to meet my weekly sales quota, I didn’t get paid at all. I believe some car salesmen still face this problem.

Other ads [which I regard less cynically] offered educational opportunities leading to a new career — in hotel management, dressmaking, or nursing. 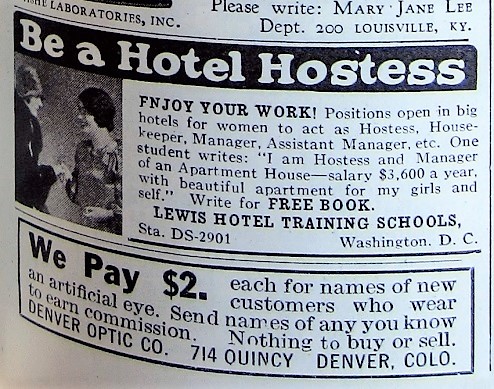 Women could “Be a Hotel Hostess” or possibly manage an apartment house — a good job for a single mother. Lewis Hotel Training School ad, October 1931. Delineator. In the ad just below, you could make $2 by tipping the Denver Optic Company off to potential artificial eye customers….

Back in the 1920’s, Lewis would teach you how to run a tea room, so this was an established business school:

Ad for the Lewis Tea Room Institute, Delineator, January 1924. “Fortunes are being made in this big new industry….”

Ads for nursing schools were also traditional, and little changed from 1924 to 1937 — except for the potential salary and the hats. 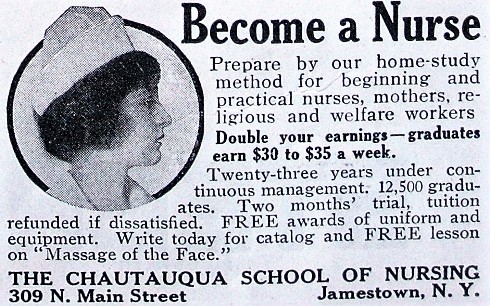 Ad for Chatauqua School of Nursing, January 1924. This school offered a home-study course.

Ad for Chicago School of Nursing, February 1935.  “You can learn at home in spare time.”

Ads for the Woman’s Institute have a long history, but during the Depression, the ads emphasized using your sewing skills to earn money. March, 1934.

I have some respect for the ads that suggested professional training for women who, like this one from the ad I began with, had never expected to work outside the home. 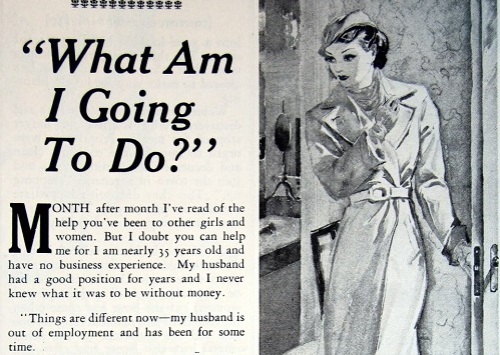 “I am nearly 35 years old and have no business experience…. My husband is out of employment and has been for some time.” Woman’s Home Companion ad for subscription sellers, March 1936.

And I can’t resist sharing (again) the “ad from the back of a magazine” that startled me into collecting them:

Ad from Delineator, March 1937. Courtesy Remembered Summers. Who wouldn’t leap at the chance to raise giant frogs for the American Frog Canning Company?

Now, that is desperation.