Fashion illustration, Delineator, December 1917. That little puff of hair near the cheek was very important. It looked so charming peeking out from under a hat. She still has long hair, piled on her head. 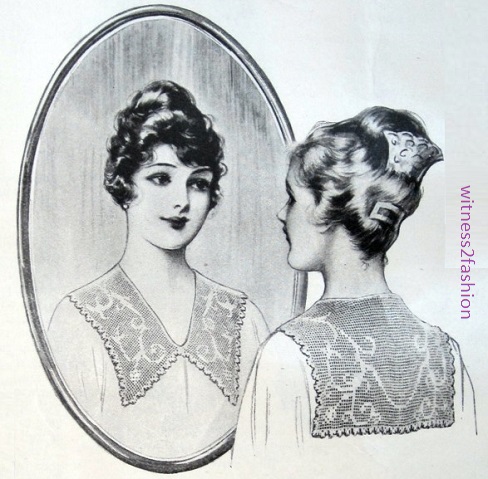 This front and back view shows that the bun on top of her head is supported by a tall comb, and the wispy hair brushed over her ears, like her bangs, has been cut. Delineator, March 1917.

My mother’s eighth grade graduation picture, circa 1919. To see the rest of her class, click here. Many of them have long, girlish curls, but she was trying to look grown-up.

She has tried to match the high hairstyles — and those very important puffs of hair over the cheeks — that she saw in fashion images.

But, as this later photo shows,  she actually had long, “Mary Pickford” curls.

Photo of my mother about 1920. Her hair is very long, but now she has cut bangs — with or without her parents’ permission. 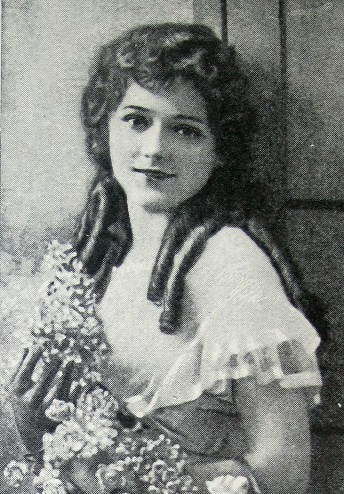 Silent star Mary Pickford’s long curls were famous. Here she is in an ad for Pompeiian night cream, 1917.

My mother did other things without her parents’ permission, too. 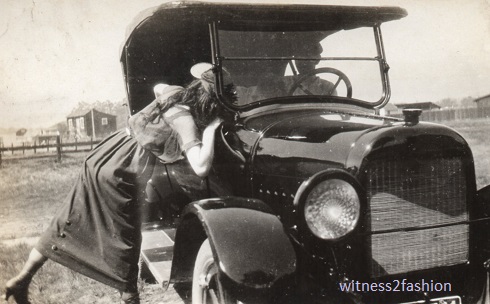 Girls, boys, cars — Uh-oh! At least we get another view of her long, long  hair…. 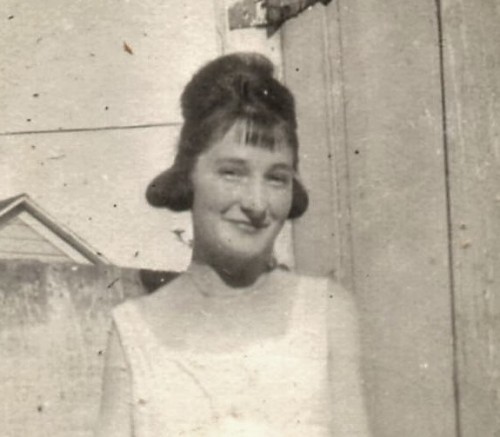 Here we see that she has cut bangs since her graduation photo, but those long curls are rolled up at the side again. Circa 1920. She is smirking because she was posing in her underwear:

This photo from 1920 says “age 16.” Helen’s friend Irene took this picture; then my mother took one of Irene, similarly undressed.

Irene has also cut bangs, and rolled her long hair up to look short at the sides. This photo was dated on the back: April 18, 1920.

Teenaged girl practicing naughtiness…. 1920. At least this “combination” has thin ribbon straps…. According to census records, Irene was about 15 in 1920.

Some readers have questioned whether my mother really was a “flapper” in the twenties, with the hint of wild behavior that implies. Ummmm….

Other girls in town also tried to achieve fashionable hairdos, and especially those little puffs that caress the cheeks. (During my youth in the 60’s, a curl on the cheek was called a Guiche; it usually curved forward.)

The woman on the right has cut the front part of her hair short, but probably still has long hair in back, like the woman on the left. Sears catalog, Fall 1917.

Left, short hair in front, with a hint of a bun at the back; right, a tall hairdo supported by a fancy comb. Delineator, April 1917.

The “puffs” or guiches on her cheek are clearly cut shorter than the rest of her hair. Delineator, November 1917.

These girls have also cut some of their front hair — although it could be hard to control the results.

Two California girls, circa 1918. It’s not easy to look like a fashion plate, even in these very stylish sweaters.

Below left, my mother’s friend Ollie had a bad hair day, but later managed an up-do: 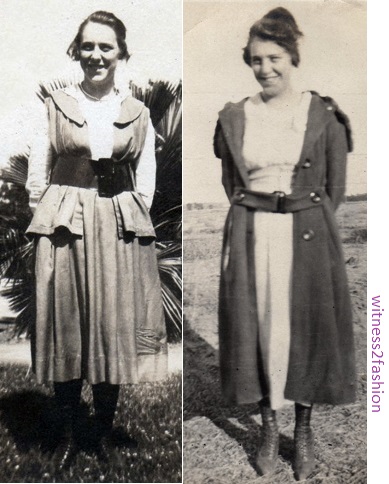 Ollie with her hair cut short at the sides; in the second photo we can see that the rest of her her hair is still long enough to pile on top of her head. Circa 1918-1920’s.

From Long Hair to Bobbed Hair

It was my aunt Dorothy who told me that my mother and her friend Irene were the first girls in town to have their hair bobbed — a story she only told decades after my mother’s death. [I suspect that Dorothy, a keen photographer,  developed and printed those naughty photos.]

According to my aunt, their mother was in the hospital, recovering from surgery. With less supervision than usual, younger sister Helen and her friend Irene “snuck off” and had their hair bobbed.  When my grandfather saw his daughter with short hair, he he told her she was forbidden to visit her mother in the hospital. He said (and believed,) “The shock would kill her!”

My mother with bobbed (and permanently-waved) hair, probably 1921 or 1922. I think this picture was taken to show her new look, fresh from the hairdresser.

I can date this picture because she is with her little nephew Gerald, born in 1921:

Here she is wearing a Chinese tunic, and extraordinarily pointy shoes:

Obviously, she got a Marcel wave as well as a hair cut: 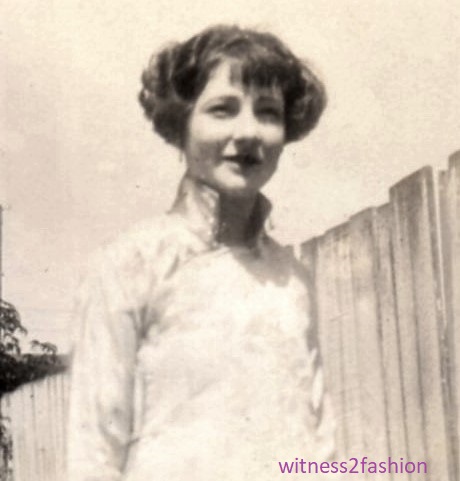 My mother with her shockingly short (and suddenly curly) hair, about 1922.

Many people thought bobbed hair was a sign that a girl was “fast.”

Training to be a flapper: my mother is showing bobbed hair, rolled stockings, and bare knees. She was about 18 years old, and wearing an “armistice blouse” that was about to go out of style.

I have two other photos of her friend Irene:

Irene has cut bangs, but only pulled one strand down into a curl on her forehead. It’s hard to be sure, but I don’t think her hair has been bobbed yet. About 1921-22.

Here, Irene, aged 18 — with “her first husband” — has a Marcel wave, and a hairstyle more associated with the 1920’s. “There was a little girl who had a little curl, right in the middle of her forehead….”

Irene with chin length hair, a Marcel wave, and a husband; early 1920’s. I suspect that she’s wearing an invisible hair net for a perfectly smooth finish. Irene was probably born in 1905, making this circa 1923.

While long hair required the kind of hairpins that mountain roads are named after [“hairpin curves,”] bobbed hair needed a different kind of hairpin — the bobbie pin. What a pity for the wonderfully named Hump Hair Pin Company.

An ad for Hump Hairpins, Delineator, March 1917. These pins for long hair were not shaped like traditional hairpins.

Nothing works for long hair like traditional hairpins — although, if you haven’t used them, you may wonder how they could hold anything in place. Humblebee & Me (dot com) has a good demonstration. Click here.

For more about Mary Pickford, and the headlines she made by finally bobbing her hair, click here. Silentology is a delightful film history site.