Three Outfits from Hattie Carnegie, 1928, Plus a Few Words from Elizabeth Hawes

I’m reading Elizabeth Hawes’ book Fashion Is Spinach, (1938) and I’ve reached the chapters in which she describes her months as a copy sketcher in Paris in the 1920’s. That is, it was her job to attend couture showings, posing as an assistant buyer for a department store (Weinstock’s); take careful mental notes (and whatever she could get away with writing on her program;) then rush home to draw the dresses she saw, in order for stores or manufacturers to make unauthorized copies of designer clothing.

However, some stores actually purchased the couture they intended to copy.  According to Hawes, [p. 55] both Bergdorf Goodman and Hattie Carnegie bought fifty to seventy-five models each season for the purpose of making copies — the couturiers understood this. Not many clients bought that many items. 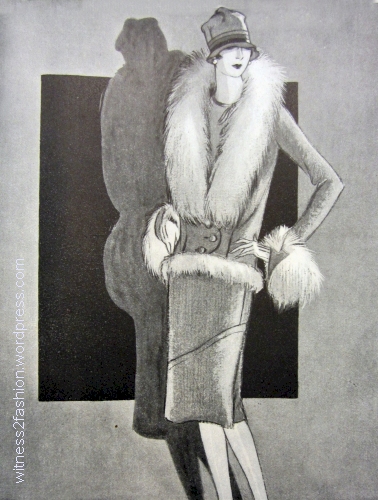 This suit by Paquin could be made to order at Hattie Carnegie in New York. Delineator, Dec. 1926.

This very high quality copy of an ensemble by Paquin could be purchased (made to order) at Hattie Carnegie.

These elegant ensembles are also from Hattie Carnegie, but the magazine did not credit any designers. Hattie Carnegie was also a high-end department store. 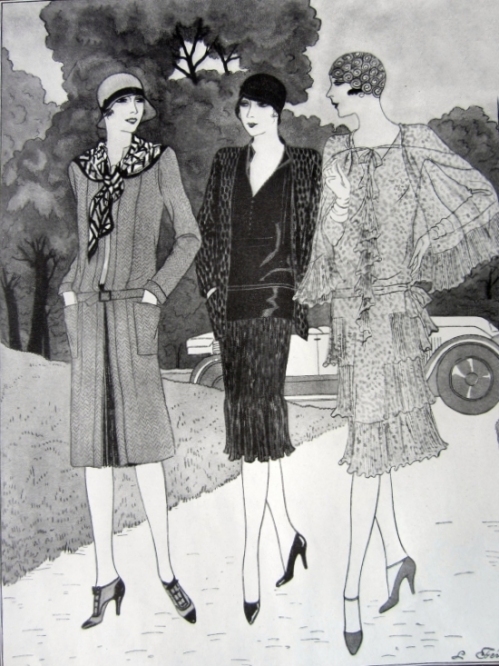 It was common practice for buyers from upscale stores like Bergdorf Goodman and Hattie Carnegie to attend the Paris collections, purchase couture models, and then duplicate them in the United States, using the same — or equally high-quality — materials for their made-to-order clients. These copies cost about the same as the originals — but saved the client a trip to Paris for fittings.  I showed this photo of a Hattie Carnegie dress in an earlier post..

Hattie Carnegie dress with large-scale print and scalloped hem, much longer in back than in front. Delineator, July 1928. 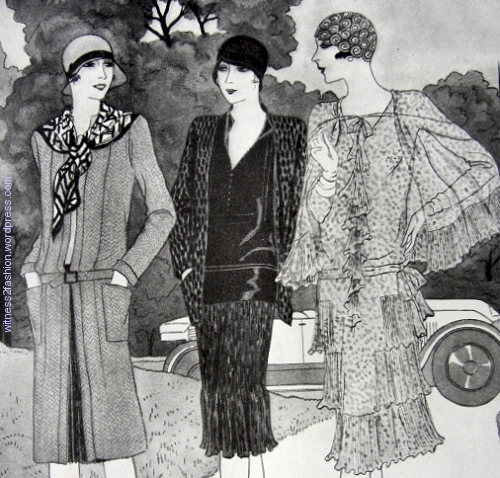 Left, “The country tweeds of the chic woman are distinguished from the tweeds she wears in town by informal accessories. A scarf in autumn leaf colors is tied around the shoulders of this collarless beige coat, belted at an almost normal waistline. Beneath it a plaited brown skirt is worn with a tuck-in blouse.”

Center:  “The printed silk suit has an unassailable chic. Here it is in the shadowy colors of damp violets, worn with a small straw hat in the darkest shade. Suit and hat from Hattie Carnegie.”

Right:  “The chic of printed chiffon, the brown and beige colorings, plaited tiers and jabot, and the feminine quality of the short circular cape distinguish this important frock. The cape is separate and makes with the frock a complete costume that may be worn for tea in town or in the country.”

“The hat of coils of very pliable straw fits the head as closely as a transformation.” July 1928. Delineator.

This close-fitting hat is rather like one that Fascination Street showed here. Its straw would have been shiny. A “transformation” was a close-fitting wig. Silver transformations were popular in Paris in 1925, according to a Delineator article, “Slick ‘n’ Slicker,” from January 1925. (Click here.)

“The situation among American buyers in Paris during the years I worked there [1925 – 1928] was very simple. As a buyer of expensive French models for American mass production, you  stole what you could and bought what you had to.” Fashion is Spinach, by Elizabeth Hawes, paperback, pp. 52-53.

Hawes later worked for a “copy house” in Paris, which kept a supply of its own designs — usually sportswear — on view, in case of raids, but which also did a steady business in illicit copies of couture. Trusted clients of “Madame Dore” (as Hawes called her) had to navigate obscure stairways to a not-very-glamorous shop, where they could have fittings for made-to-order copies. The prices for these Paris copies were about half what they cost from Chanel or Patou, because Doret’s overhead and customer service were lower than the luxurious premises and deluxe treatment offered at Vionnet or Chanel. [ Hawes, p. 38.] Doret purchased her materials and trims from the same manufacturers who supplied them to the top-of-the line fashion houses. Hawes learned a lot about high-quality clothing at this copy house, because at “Madame Doret,”

“Our boast was that we never made a copy of any dress of which we hadn’t had the original actually in our hands.”

(Mme Doret didn’t usually buy the originals; they were “borrowed” for a few hours while on their way to being shipped to real buyers, or loaned to Mme Doret by clients who owned them  — in exchange for discounts on the copies of other couture made by Mme Doret.)

Hawes got her first real design job in May, 1928,  at the Paris establishment of a designer called Madame Nicole Groult. Serendipity struck this week, when I found one of Mme. Groult’s designs illustrated in the Delineator:

“A distinctly Franco-American fashion with its sleeveless frock is made of brown wool braided with beige and worn with a blouse of beige crepe de Chine. A typical Groult flower is embroidered on the front in rose and green cotton. From Nicole Groult.”

The Met has a charming embroidered cloche hat with a Nicole Groult label; click here.

At the recent exhibit of High Style from the Brooklyn Museum Collection, this dress by Elizabeth Hawes really impressed me: 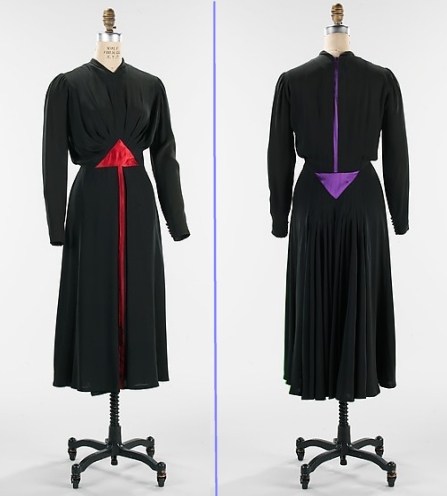 In spite of her joking title (the arrows point to the breasts and the buttocks), this dress would really flatter a normal woman’s figure, and its red and purple geometrical color blocks remind me of some Yves Saint Laurent dresses from 1966-67.  Although it looks black, it is actually a very dark green. The museum docent told us that Hawes’ Tarts dress cost $375 in 1937. It was made in America, but it was custom couture.

The Metropolitan Museum has a large collection of made-to-order Designer clothing by Elizabeth Hawes. Click here to see over sixty examples of her work. Her book, Fashion Is Spinach, has been reprinted by HardPress Publishing and is available in paperback, or as an E-Book from various sources. 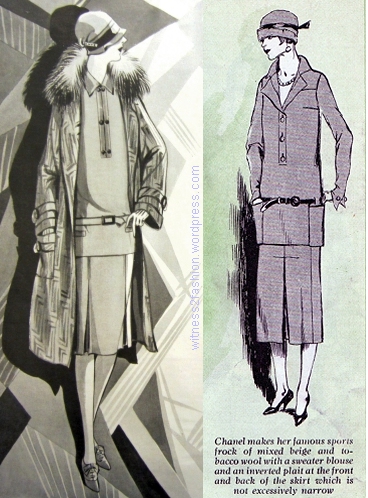 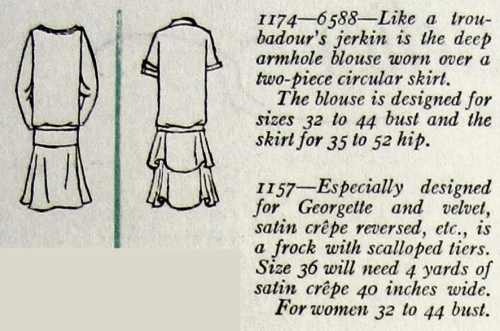 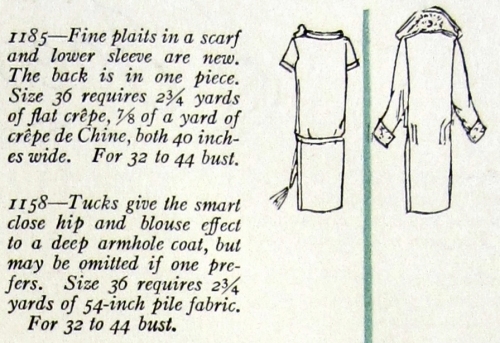